The U.S. bombing of a Doctors Without Borders hospital in Kunduz, Afghanistan, blipped on and off the mainstream media’s radar, catalogued as just one more unfortunate mistake in the last 14 years of war. But there is probable cause to treat the atrocity as a war crime, writes Marjorie Cohn for TeleSUR.

In one of the most despicable incidents of the United States’ 14-year war in Afghanistan, U.S. troops bombed a hospital in Kunduz, killing 22 people, including patients, three children, and medical personnel from Doctors Without Borders, or MSF. Thirty-seven people were injured, including 19 staff members in the Oct. 3 attack.

U.S. forces knew they were targeting a hospital because MSF, as it does in all conflict contexts, had provided its exact GPS coordinates on multiple occasions over the past months, including most recently on Sept. 29. There was a nine-foot flag on the roof that identified the building as a hospital. After the first strike, MSF contacted U.S. officials and reported the hospital was being bombed and begged them to halt the attack. Nevertheless, the U.S. AC-130 gunship continued to pummel the hospital repeatedly for more than one hour. 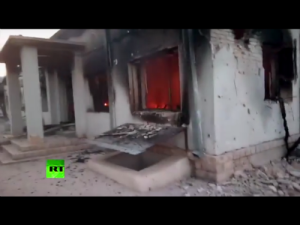 Aftermath of the U.S. destruction of the Doctors Without Borders hospital in Kunduz, Afghanistan. (Graphic credit: RT)

“Our patients burned in their beds,” said MSF International President Joanne Liu. “Doctors, nurses and other staff were killed as they worked.”  She added, “Our colleagues had to work on each other. One of our doctors died on an improvised operating table an office desk while his colleagues tried to save his life.”

In attempting to explain why they had bombed a hospital, U.S. military leaders changed their story four times. On Saturday, the day of the bombing, U.S. spokesman Col. Brian Tribus said the strike occurred “against individuals threatening the force. The strike may have resulted in collateral damage to a nearby medical facility.”

On Sunday, Gen. John Campbell, U.S.-NATO commander in Afghanistan, claimed the strike occurred “against insurgents who were directly firing upon U.S. service members  in the vicinity of a Doctors Without Borders medical facility.”

On Monday, Campbell announced, “Afghan forces advised that they were taking fire from enemy positions and asked for air support” and “several civilians were accidentally struck.” By Tuesday, Campbell said, “the decision to provide aerial fire was a U.S. decision, made within the U.S. chain of command. A hospital was mistakenly struck. We would never intentionally target a medical facility.”

Since the Pentagon has access to video and audio recordings taken from the gunship, they must know what actually occurred. Daily Beast reported that the recordings contain conversations among the crew as they were firing on the hospital, including communications between the crew and U.S. soldiers on the ground. Moreover, AC-130 gunships fly low to the ground so the crew can assess what they are hitting.

But members of Congress who oversee the Pentagon have been denied access to the classified recordings.

Article 18 of the Fourth Geneva Convention states, “Civilian hospitals organized to give care to the wounded and sick, the infirm and maternity cases, may in no circumstances be the object of attack, but shall at all times be respected and protected by the parties to the conflict.”

International law expert Mary Ellen O’Connell, a professor at Notre Dame Law School, said, “The critical question for determining if U.S. forces committed a war crime was whether they had notified the hospital ahead of the strike if they understood the Taliban to be firing from the hospital.”

MSF has said they were never notified that the hospital would be bombed. “Not a single member of our staff reported any fighting inside the MSF hospital compound prior to the U.S. airstrike on Saturday morning,” according to MSF General Director Christopher Stokes.

The U.S. strike was a precise attack on the hospital, because no other buildings in the MSF compound were hit. MSF executive director Jason Cone said, “I want to reiterate that the main hospital building where medical personnel were caring for patients was repeatedly and very precisely hit during each aerial raid while the rest of the compound was left mostly untouched. So we see this as a targeted event.”

MSF is demanding an independent investigation by the International Humanitarian Fact-Finding Commission (IHFFC), established under Additional Protocol I to the Geneva Conventions. But the United States must consent to the investigation. The U.S. government says there are enough investigations one by the Pentagon, one by a joint U.S.-Afghan group, and one by NATO. But none of these is independent and impartial.

Historian and investigative journalist Gareth Porter has written three articles about three different internal investigations the U.S. military used to cover-up operations that should have led to criminal prosecutions against U.S. officers. Why should we believe that this will be any different?

The Rome Statute for the International Criminal Court provides several bases for war crimes prosecution. They include willful killing; willfully causing great suffering or serious bodily injury; intentional attacks against civilian or civilian objects; intentional attacks with knowledge they will cause death or injury to civilians when clearly excessive in relation to the anticipated military advantage; and intentionally attacking medical facilities which are not military objectives.

Although the United States is not a party to the Statute, there could be jurisdiction over U.S. leaders if the Security Council referred the matter to the Court. That will not happen because the United States would veto such a referral.

If U.S. leaders are found on the territory of a country that is a party to the Statute, that country could send them to The Hague, Netherlands, for prosecution. But the Bush administration blackmailed 100 countries into signing “bilateral immunity agreements,” promising they would not send U.S. nationals to The Hague on penalty of losing U.S. foreign aid.

Other countries can prosecute foreign nationals under the well-established doctrine of “universal jurisdiction.” But since Bush initiated his war on Iraq, no nation has been willing to incur the wrath of the United States by maintaining such an action against a U.S. leader.

Nick Turse and Bob Dreyfuss documented the killing of as many as 6,481 Afghan civilians by U.S. forces from October 2001 through 2012. The U.S. government has killed large numbers of civilians in its drone attacks in Iraq, Afghanistan, Pakistan, Libya, Syria, Somalia and Yemen. But President Obama rarely apologizes to or compensates the victims. It is only because a Western-based organization was hit and the attendant media coverage has been so overwhelming that led Obama to apologize to MSF.

MSF’s advance provision of the hospital’s coordinates to U.S. forces, its notifications during the bombing, its denial that any fire was coming from the hospital, and the Pentagon’s shifting rationales for the bombing constitute probable cause that a war crime was committed.

Obama should consent to a full, independent, impartial investigation of the hospital bombing by IHFFC. If that investigation shows that war crimes probably occurred, appropriate prosecutions of the U.S. chain of command should ensue.

Marjorie Cohn is a professor at Thomas Jefferson School of Law, former president of the National Lawyers Guild, and deputy secretary general of the International Association of Democratic Lawyers. Her most recent book is Drones and Targeted Killing: Legal, Moral, and Geopolitical Issues. See www.marjoriecohn.com. [This article was originally published by teleSUR:  “http://www.telesurtv.net/english/opinion/The-Kunduz-Hospital-Bombing-20151013-0018.html”]

← MH-17: The Dog Still Not Barking
Erdogan and the Ankara Bombing →

23 comments for “The Kunduz Hospital Atrocity”