As demonstrated by Steve Kroft of CBS’ “60 Minutes” in his contentious interview with President Barack Obama, a key role for the mainstream news media is to enforce whatever warmongering “group think” dominates Official Washington, such as today’s perceived need to escalate U.S. military involvement in Syria and hit back against Russian President Vladimir Putin.

Not to excuse Obama or any other politician for caving into this kind of pressure, but it is daunting to confront a solid wall of “conventional wisdom” posed as hostile questions that almost always favors militaristic solutions to international problems. On the other hand, a politician can almost never go wrong by adopting the most belligerent positions, by posing as the “tough guy” or “tough gal,” by making sure not to get labeled “weak.” 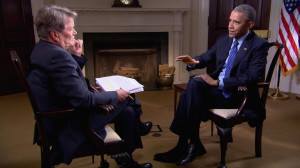 In that way, the mainstream media reflects the views of what some analysts call the “deep state,” i.e., the underlying assumptions of the ruling elite that are profoundly influenced by decades of massive investments in what President Dwight Eisenhower famously termed “the military-industrial complex.” Also shaping the “group think” is the pressure from well-entrenched lobbies, such as those representing Israel and Saudi Arabia.

Thus, on Sunday evening, Kroft castigated Obama on behalf of those interests, badgering the President of the United States to intervene more aggressively in the Syrian conflict in line with the desires of the Saudis and the Israelis who have both adopted an intensely hostile position vis a vis the so-called “Shiite crescent,” the string of Shiite-led governments and political movements from Iran through Iraq to Syria and southern Lebanon.

On “60 Minutes,” there was no debate as to why the United States should jump in on one side of a sectarian conflict between Sunnis and Shiites dating back to the Seventh Century — or whether U.S. national interests ally with either Saudi support for the Wahhabi fundamentalist form of Sunni Islam or Israel’s opportunistic teaming-up with Saudi Arabia. In Kroft’s world, it is just taken as a given that Obama should do what the Saudis and Israelis want.

Kroft continued, “There is a perception in the Middle East among our adversaries, certainly and even among some of our allies that the United States is in retreat, that we pulled our troops out of Iraq and ISIS has moved in and taken over much of that territory. The situation in Afghanistan is very precarious and the Taliban is on the march again. And ISIS controls a large part of Syria. They say you’re projecting a weakness, not a strength.”

When Obama interrupted to ask, “You’re saying ‘they’ but you’re not citing too many folks,” Kroft replied, “I’ll cite if you want me to. I’d say the Saudis. I’d say the Israelis. I’d say a lot of our friends in the Middle East.”

To deflect the politically damaging depiction of “projecting a weakness,” Obama talked tough, lashing out at Putin as the one supposedly lacking leadership. But in defense of not recommitting a large U.S. combat force into Mideast conflicts, Obama did note that some of his Republican critics favor sending “endless numbers of troops into the Middle East.”

But there was another way to address these issues without simply Kroft channeling the attitudes of the Saudis, Israelis and U.S. neoconservatives. For instance, he could have asked about possible areas where the United States and Russia could cooperate to restore peace to the region.

Or, if Kroft wanted the drama of an argument, he could have pressed Obama on his decision to provide TOW anti-tank missiles and other sophisticated military hardware to Syrian rebels fighting the Syrian army.

The Washington Post’s Liz Sly on Monday reported that the CIA has been supplying TOWs to the Free Syrian Army, a relatively moderate Syrian rebel group whose success with the missiles may have forced Putin’s hand regarding intervention to prevent the collapse of Syria’s military. She reported that only a small number of TOWs have apparently fallen into the hands of Islamist extremists.

While Sly’s story raises a valid question about the possible unintended consequence of Obama’s decision to introduce TOW missiles into the Syrian conflict — prompting the Russian intervention — I’m told that the CIA’s TOWs also include about 500 missiles going to Ahrah ash-Sham, an Islamist force founded, in part, by Al Qaeda veterans. That raises an additional question about Obama playing a risky game of collusion with jihadists.

Ahrah ash-Sham collaborates with Al Qaeda’s Nusra Front as the two leading militias in the Saudi-backed Army of Conquest but maintains at least some formal separation from Al Qaeda, all the better to qualify for U.S. weapons.

Under pressure to “do something” in Syria, Obama apparently bought into the dangerous idea that by ratcheting up the military pressure on Syria’s President Bashar al-Assad by giving TOWs to groups like Ahrah ash-Sham that the jihadists would inflict enough damage on the Syrian military to force Assad to accept “regime change” in Damascus.

The risk in this calculation is that such political-military calibrations are never perfect because a little too much pressure could lead to the collapse of the Syrian army and a victory for the Army of Conquest and/or the Islamic State. Once in Damascus, who’s to say that Ahrah ash-Sham won’t return to its Al Qaeda roots or won’t share power with its allies, Al Qaeda’s Nusra?

And, it deserves remembering that the Islamic State (also known as ISIS, ISIL or Daesh) was originally “Al Qaeda in Iraq” and broke off from Al Qaeda Central over the tactical question of whether it makes sense to start the Islamist caliphate now (the ISIS position) or focus instead on mounting terrorist attacks against the West (Al Qaeda’s position).

Kroft may not have known how entwined Obama, the Saudis and the Israelis are in assisting these Al Qaeda-connected movements (Israel has helped the Nusra Front near the Golan Heights), but he could have raised the question about exactly whom the Obama administration is assisting. Instead, he chose to lament that Putin is “bombing the people that we are supporting.”

Kroft could have provided an important service to the American people if he had drawn Obama into his thoughts about the complexity of the Syrian thicket and asked whether the President thinks that except for ISIS Al Qaeda’s other affiliates and spinoffs are no longer “terrorists.”

Or, Kroft could have pressed Obama on whether the U.S. government or the Syrian people should get to decide whether “Assad must go!” Obama insists that the vast majority of Syrians are joining him in that demand but why not test it in an election.

If Obama and Putin could cooperate on bringing Assad’s representatives together with U.S.-backed “moderate” Sunni politicians with a stern mandate to work out a power-sharing unity government then a stabilized Syria could hold elections for leaders who reflect the public will. If such difficult arrangements were possible in Lebanon to resolve the sectarian conflict there, why couldn’t a similar approach work in Syria?

But these questions don’t get asked in the narrow frame permitted by the mainstream media, which has presented a remarkably one-sided account of the Syrian conflict as well as other international crises, including the New Cold War hotspot, Ukraine. As much as American leaders boast about the diversity and pluralism in the U.S. media, there is little room for genuine independence and dissent at least from the side seeking compromise and peace.

Indeed, suppressing such alternative analyses has become a prime purpose of the mainstream media. Remember how skeptics of the Iraq War were treated in 2002-03, either ignored or browbeaten by the likes of CNN’s Wolf Blitzer and other media stars. Not even someone like former Vice President Al Gore, who defeated George W. Bush in the national popular vote in 2000, was allowed to make the case against the Iraq War to the broad TV public.

Then, during Campaign 2008, Sen. Barack Obama was pummeled over his opposition to the Iraq War “surge,” which according to the then-popular “group think” had achieved “victory at last.” Media stars, such as CBS News’ Katie Couric and ABC News’ George Stephanopoulos, demanded that Obama admit he was wrong to oppose the “surge” and that his Republican rival, Sen. John McCain, was right to support it.

Obama’s more nuanced explanation that a number of developments had temporarily brought the Iraq casualty rates down was correct, but he eventually caved in and confessed to his heresy in an interview with Fox News’ Bill O’Reilly. A chastened Obama gushed that the “surge” had “succeeded beyond our wildest dreams.” [See Consortiumnews.com’s “Reviving the Successful Surge Myth.”]

In a way, Kroft’s interview was a bookend to that earlier experience for Obama getting schooled in the ways of Official Washington: a “group think” takes shape and the mainstream media enforces it with the intellectual standards of a junior-high in-crowd making fun of the poor kids’ clothing.

Americans can expect something similar when CNN hosts the first Democratic presidential debate. The network has assigned four mainstream CNN correspondents to do the questioning while excluding any progressive voice in contrast to CNN’s inclusion of a right-wing representative for its Republican debate.

If there were some gutsy, independent-minded progressive on the panel, he or she might ask some difficult questions to candidates who talk tough about the Middle East. For instance, some pointed foreign policy questions could be asked to the two frontrunners, former Secretary of State Hillary Clinton and Sen. Bernie Sanders:

–Secretary Clinton, what have you learned from your misguided support for the Iraq War that has spread violent disorder across the region and now into Europe? Do you think someone who showed such poor judgment in supporting a war that was illegal under international law and involved massive human rights violations should be rewarded with the Presidency of the United States? Do you regret your enthusiasm for regime change in Libya that contributed to more death and destruction and to the spread of ISIS into northern Africa? Considering everything — including the torture of Muammar Gaddafi — do you regret your joke, “we came, we saw, he died”?

–Sen. Sanders, you did oppose the Iraq War, but do you really believe that the problems of the Middle East can be solved by the Saudis intervening more in the region and getting “their hands dirty”? Do you support Saudi Arabia and its Sunni allies arming of Al Qaeda’s Nusra Front and the Islamic State in Syria, as acknowledged by Vice President Joe Biden and the Defense Intelligence Agency? Do you favor the Saudi bombing campaign inside Yemen that has slaughtered thousands of civilians, including the celebrants at two weddings?

–Both of them: Are you so set on demonizing Putin and Assad that you’d prefer Damascus to fall to Al Qaeda and/or ISIS? Instead of tough talk, isn’t this the time to work constructively with Russia to achieve a negotiated peace in Syria and — once security is restored — democratic elections that leave Assad’s future up to the Syrian people, not decided by the U.S. government?

But don’t worry, folks, the candidates won’t be tested in that way. They’ll just be urged to growl about the need to stand up to Putin and get rid of Assad — and to criticize Obama for displaying “weakness” that has alienated America’s Mideast “friends.”