Exclusive: The Obama administration often scolds China over its human rights record and President Obama is sure to hammer away at those themes in his summit with Chinese President Xi but it’s hard for the United States not to look hypocritical given its own checkered history, writes Jonathan Marshall.

In summit discussions with President Xi Jinping of China, President Barack Obama might want to open lines of communication over human rights by reflecting on America’s own failings, following a script something like this:

I know you don’t like to hear about human rights from us. To your ears, it sounds like lecturing, even hectoring. Even so, I’ve instructed our ambassador to keep raising issues as merited. In our global society, we cannot close our eyes to human rights issues, wherever they occur. 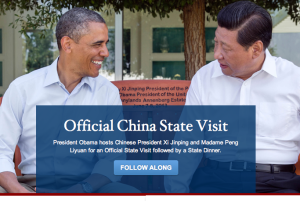 A screen shot of the White House home page on Sept. 25, 2015, noting the summit with China’s President Xi Jinping by showing an earlier meeting between Xi and President Barack Obama.

I’m hoping that you won’t close your ears to what I have to say now. I thought I would try addressing human rights in a different way, a way that you Chinese are familiar with. I want to engage in a little self-criticism.

Since our Declaration of Independence and our Bill of Rights, the United States has led the world in raising consciousness about the importance of human rights. But I’m only too well aware that our practice has often fallen short. Historically, in the case of slavery and the killing and uprooting of Native Americans, our practice has been downright criminal, verging on genocidal.

We are still learning from our painful history and obviously have a long way to go. Almost every day I see reports or videos of unjustified police shootings, disproportionately against people of color. No other country in the world comes close to our record.

Our criminal justice system discriminates against arrestees as well. With some 2.3 million people in jails and prisons, we may have even more people behind bars than you do. A large percentage of them are serving long terms for nonviolent crimes, especially drug offenses. African-Americans represent only about 13 percent of our population but more than 40 percent of state and federal prisoners serving time for drug offenses.

We don’t usually think of drug arrests as a human rights violation, but the effects of our drug policies on families, communities, and entire ethnic groups have been downright devastating, creating a long-term underclass with minimal access to education, jobs, and support services. I’m trying to reducing the length and disparity of drug sentences, and to respect the right of states to decriminalize the sale and use of marijuana, but I admit I haven’t given this matter the attention it deserves.

Within our prisons, mistreatment continues at some institutions, but perhaps no abuses are worse than widespread and prolonged use of solitary confinement. Tens of thousands of prisoners are in some form of segregation at any given time. This incredibly harsh form of punishment is considered by some authorities as a form of psychological torture. It reflects badly on our country that it remains so widespread, and looking back I wish I had led greater reforms in this area as well.

This won’t come as any revelation, but our criminal justice system especially penalizes the poor, who cannot afford rising bail costs, and who bear the brunt of many municipal fines that are designed to raise local revenue. Reforms are taking place in some jurisdictions following the riots in Ferguson, Missouri, but it remains a widespread stain on our practice of justice.

The exodus of Syrian refugees to Europe has recently called the world’s attention to the plight of migrants and immigrants. Our country has little to boast about on that score. In one recent 12-month period, our customs and border protection forces arrested more than 68,000 children who fled terrible poverty and violence in Central America and Mexico.

I confess that my own administration has, in response to political pressure over immigration, greatly increased the number of people detained and deported in recent years. Even when families have good reason to seek asylum, we treat them like criminals or national security threats. On the plus side, last year I signed an executive order to give temporary legal status to more than 400,000 immigrants who have lived in the United States for five years or more, or have legal children.

Our country is surprisingly backward on some issues of women’s rights, including the right to an abortion and even to contraception. As you know, ongoing struggles with religious conservatives make these issues extremely contentious. We face a potential shut-down of our government over the issue of federal funding of Planned Parenthood clinics which provide basic health services to women, even though funding of abortion is already banned.

Finally, and I could go on with many other issues, I’m saddened and embarrassed that at this late stage of my second term in office, the United States still holds more than 100 prisoners without charge or trial at Guantanamo Bay. I would never have imagined when I first took office that this blot on our record would remain. I am pleased to say, on a related matter, that I did end the use of torture when I took office, though critics still take me to task for not holding anyone accountable for breaking U.S. and international law relating to this practice.

Why am I telling you all this? Because I know my government can’t be credible when it speaks up about human rights in China or any other country until we take steps to address our own shortcomings at home. It’s a lot easier for me to righteously condemn your government’s mistreatment of dissenters than for me to look in the mirror at our own misdeeds, but if we aren’t willing to do the hard work of making change happen at home, we won’t stand much chance of making change abroad.

I know that if I just smugly sit here and tick off all the human rights problems in China, as if we have none in our own land, you will consider me a hypocrite. Our effective communication will end.

I don’t expect any response from you now, but I hope you’ll reflect on my words. I challenge you someday to try a little self-criticism of your own, not the rote kind you and your father were subjected to during the Cultural Revolution, but a genuine kind that leads to self-improvement and improvement of your nation. Thank you.

9 comments for “Can Obama Lecture Xi on Human Rights?”