The past may be prologue, but it is first necessary to know what that past is, a growing problem in a modern age when so much is miswritten, misunderstood or forgotten. This dilemma of “secret” history is now a factor in the Greek debt crisis, says ex-U.S. diplomat William R. Polk.

After all the press reports on Greece in recent weeks, can there be any secrets? Yes, there are. Indeed, I suggest that, even though the press indicates that the Greeks have given in to most of the demands of their creditors, the underlying (or secret) realities are likely to resurface in the detailed negotiations to follow in the coming days and weeks.

To consider that possibility, first let me define what I mean by “secrets.” Such “secrets” are present conditions that grow out of past events and are not generally known until some future time. They sometimes “blindside” statesmen who are reduced to saying, “never mind how we got in this mess; all we can do now is to try to deal with it.” 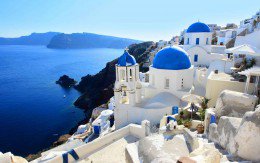 A scene in Santorini in the Greek islands.

For many political leaders, the past is treated like a closed book, a “secret” history about which neither they nor their constituents inquire. That failure to fully comprehend the past often causes people to leap into even more crises in the present and the future.

What has this to do with the Greek problem today? To find out, let us look at a few of the “secrets” of the major actors in the Greek drama. Consider, first of all, the position of the main task master of Greece, the German government. Under Chancellor Angela Merkel’s leadership, it has adopted a simple and seemingly consistent position “debts must be repaid.” But, the record is not quite so simple or consistent.

As individuals, we know if we borrowed money and then lost it, we would still owe the lender the money we lost. But individuals have an escape. We can declare bankruptcy and so wipe away unpayable debt. Our grandfathers thought bankruptcy was shameful, but today it has become a business strategy. Many of our largest corporations have used it to gain advantages. Does what applies to individuals and corporations also apply to states?

In fact, over the last century, almost all of Greece’s creditors including Germany have defaulted or “restructured” the sovereign debts at least once. Some have done so several times. As economist Thomas Piketty told the German Newspaper Die Zeit, on July 10, “Germany is the country that has never repaid its debts.”

Germany’s Wirtschaftswunder (economic miracle) came about not only because of German hard work (and the contribution of immigrant labor) or even the result of about $15 billion (in today’s money) America gave Germany under the Marshall Plan. These were essential, but most economists would hold that at least as important was that, in 1953, West Germany was forgiven 50 percent of its foreign debt and allowed to “restructure” domestic debts.

Thus, the West German government was able to forge the new Germany without the burden of past debt, making it at least ironic that Germany now takes such a strong stand on Greek debt repayment. As Piketty wrote, “It has no standing to lecture other nations.” This is one “secret” that Merkel and others don’t want to remember.

And Germany was not alone. Most of the countries now lined up against Greece have handled their debts by defaulting, having their debts forgiven or devaluing their currency.

Devaluing currency was a standard technique for handling excessive debt (and amounted to reducing the value of what was repaid to creditors). But devaluation is no longer an option for members of the Euro zone. The dilemma of the European Union is that while members remain politically independent, those that joined the “Euro zone” surrendered control of their currency. They could set their own budgets and borrow money but could not control their debts by the traditional means, devaluation.

If a government could not devalue its currency, the other option was to cut expenditures and/or raise taxes, i.e., “austerity.” That is what the lenders have been demanding that Greece do.

But cutting government expenditures also has the effect of cutting jobs. That makes people suffer and reduce their own spending, which creates a downward, recessionary spiral, spreading joblessness, diminishing tax revenues and increasing demand for unemployment compensation. Since most modern governments have social welfare programs, the most obvious expense to be cut is the funding of those programs, which further spreads hardship. So, shredding the social safety net is unpopular and the Greek government has resisted doing it.

Greece has another activity that could be cut: military expenditure. In 2013, Greece was spending about 2.2 percent of its GNP or roughly $10 billion on the military. It was strongly urged to spend at least that amount by NATO. Yet, realistically there is no longer, if indeed there ever was, a need for Greece to maintain a large military force. So the government has offered, as a part of a new bailout “package,” a haircut for the generals, who won’t give up their funding easily. The new package also includes at least discussion of remission of some part of Greece’s debt and the injection of short-term loans to meet the demands of the bankers.

Another “secret” from the past that returns to haunt statesmen today is that Greece got caught up in clever, but perhaps illegal, manipulation of accounts. Led by the American banking firm of Goldman Sachs, the previous conservative government of George Papandreou did a $15 billion “swap” to hide Greek indebtedness, according to Bloomberg News. Goldman Sachs was alleged to have made hundreds of millions of dollars in the deal taking that money into its corporate coffers while leaving the debt behind in Greece.

Not so “secret,” too, is the nature of Greek government and society. Traditionally, Greeks living abroad remitted money to friends and relatives who stayed behind. These payments cushioned the traditional poverty of the country. But today, the movement of money has been reversed. Money is drained out of Greece into foreign secret bank accounts.

Put simply, in recent years, Greece has become an oligarchy. The very rich avoid civic responsibility. Few pay taxes. They fill Piraeus harbor with mega-yachts and put their money abroad rather than investing in Greek industry. It does not appear that even the self-proclaimed “revolutionary” Syriza government can alter this situation.

But surely these various factors are evident to the European lenders and to the Greeks? Not necessarily, because an attempt was made to keep them secret. As Reuters reported on July 3, the European nations (the lenders) tried to stop the International Monetary Fund from publishing its analysis of the Greek debt, confirming what the Greek (Syriza) government has been arguing for months about the inability to austerity alone to resolve Greece’s debt crisis. Keeping the information secret made negotiations more difficult and contributed to the suffering of the Greek people.

Finally, there is the “secret” of the Euro itself. It is a double-edged sword having different effects in different economies. In Germany it was a stimulus. By joining the Euro, Germany virtually devalued its currency so German industry got a significant advantage in foreign sales. In Greece, the effect was negative. By joining the Euro, Greece raised the cost of its exports. Projecting ahead, some economists believe that staying in the Euro would make Greece’s recovery far more difficult.

The bottom line is this: Greece has been, is and may always be a poor country. The reason why the ancient Greeks colonized the Mediterranean was that their rocky, dry soil could not support them. All their city-states sent indeed often forced their “surplus” population to leave.

Over the centuries, much of southern Europe, Egypt, much of Africa, Latin America and North America became home for Greeks who could not be supported inside Greece itself. This diaspora has helped and will help Greece, but Greece’s own very rich people probably will not.

Today, much of Greece’s hope rests precisely on its barren but beautiful chunks of rock in the Mediterranean: foreign tourists attracted by Greece’s beauty and history may be the ultimate “secret” of Greece’s success.

17 comments for “‘Secret’ History of the Greek Crisis”