Exclusive: The after-shocks from the Wall Street crash of 2007-08 continue to rattle international stability, with Greece now rejecting never-ending demands for more belt-tightening and raising the specter of a splintered European Union, as ex-U.S. diplomat William R. Polk explains.

The Greek people have not only spoken; they have shouted. More than six in ten voters said “no.” So what does that mean and what will happen next?

What it means is twofold: Domestically, it means that the Greek people in vast numbers refuse to accept the verdict of the European Central Bank, the International Monetary Fund and the creditor nations. That verdict would have amounted to a generation or more of continued suffering for the Greeks in pursuit of the receding goal of repaying the creditors for their loans. 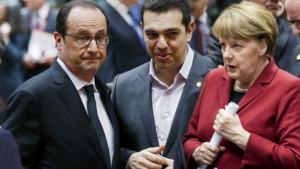 As German Chancellor Angela Merkel has said, loans must be repaid. In principle, of course, she is right, but there are extenuating circumstances, including that the lenders baited the trap in which the Greeks have fallen. The lenders offered loans when they should have known that the borrowers had little chance of repaying them.

Sometimes in Greece as, for example, in Latin America bank officers encouraged borrowing because they got bonuses for generating business, a common banking practice. Other loans were made for political purposes. Some also had “security” aspects.

Collectively, the Greeks are “guilty” of accepting the loans. They should have known how hard it would be to repay them. Some, prudently, refused, but when the loans temporarily created a minor boom, almost everyone was swept up in the euphoria.

After years of warfare, poverty and turmoil, it seemed that a new day was dawning. A “bubble” of expectation seemed to have changed the rules of the game. So both the government and the people plunged into the financial trap.

And the Greeks were not alone. Other heavy borrowers included the governments and peoples of Spain, Portugal, Italy and Ireland. This is what makes the current crisis more than just a Greek problem.

Internationally, there are already signs that lenders are reacting to the Greek vote in panic. If one country that borrowed heavily is defaulting, they ask, which other heavily-borrowing country is likely to be next? Many have suggested it will be Spain. Apparently a number of lenders believe that popular Spanish movements resemble the coalition of groups supporting Greek Prime Minister Alexis Tsipras’s Syriza. The bankers may not particularly care about the politics or ideology, but they fear the turmoil.

Bankers are usually noted for their prudence (especially when the risks of non-payment are readily apparent). And prudence argues for either making no new loans or even calling in those already made. This could dramatically harm the Spanish economy where already in this year nearly one in four workers could not find a job.

So, it’s clear that the time of danger is here. What about the time for statesmanship? Ironically, the lenders do not seem to have yet understood that the “No” vote could save the Euro, save Greece and potentially save Spain, Italy, Portugal and Ireland. Why is that so?

It is so because having secured his support at home, Prime Minister Tsipras can now afford to negotiate a sensible deal. And, having seen that Tsipras survived what amounted to a vote-of-no-confidence and would have meant his political removal if he had lost, Chancellor Merkel and French President Francois Hollande now realize that they must negotiate a sensible deal with Tsipras if they are to save the Euro and potentially the European Union.

What would be the basis of a compromise? While there are details of considerable complexity, the heart of the matter is reasonably simple:

First, Greece cannot repay the huge debt in the foreseeable future. That would have been true even if the Greeks had voted “yes.” Put starkly, the IMF, the European Central Bank and other creditors must forgive a large part of the Greek debt. They probably will choose to disguise “forgiveness” by calling it an extension into the remote future.

This is essentially what the Greeks and particularly Finance Minister Yanis Varoufakis have demanded. However, to make such a deal more acceptable to the Merkel-Hollande bloc, Varoufakis recognized that his presence was divisive and resigned, but his move will not change the terms of the possible compromise. It must be along the lines that he had marked out.

Second, if Greece is to survive in some acceptable manner and possibly even avoid a civil war the country will need additional emergency financing. Tsipras’s electoral victory will make it possible for him to bend slightly but not much on such issues as welfare payments.

At the same time,  public desperation as funds dry up and even food becomes scarce will impel him to compromise as much as he can to stay in office. Meanwhile, the lenders will find strong incentives to help because a total collapse of the Greek economy raises the specter of collapse in other European Union economies and the ultimate danger of the splintering of the European Union and the collapse of the Euro.

Let us hope that in the days and weeks ahead true statesmen (or stateswomen) will take the lead.

30 comments for “Can Greece and EU Make Amends?”