Exclusive: Australia’s “60 Minutes” program refuses to admit the obvious: that it messed up in determining the location where the “getaway” video was taken after last July’s Malaysia Airlines Flight 17 shoot-down. Instead, the show presented an update with more deceptive video, reports Robert Parry.

After being caught red-handed presenting misleading video about the Malaysia Airlines Flight 17 shoot-down, Australia’s “60 Minutes” program could have acknowledged its obvious error and apologized to its viewers. Instead, the program has resorted to hurling insults toward me for noting the discrepancies and engaging in more video sleights-of-hand to compound the journalistic malfeasance.

In an update posted on YouTube on May 24, the program’s host Michael Usher acknowledged that the original amateur video of a possible BUK anti-aircraft missile battery after the July 17, 2014 shoot-down of MH-17 did not match up with the program’s video attempting to replicate that scene in the eastern Ukrainian city of Luhansk.

But Usher insisted that was just because his crew couldn’t get access to the location where the “getaway” video was shot. He dismissed the obvious differences as simply a case of using a different camera angle.

Yet, then, Usher pulled two fast ones on his viewers. The first was to present a view of the intersection in Luhansk taken by a traffic camera “just before the shooting” and then matching it up with video taken by his crew. Usher noted that his crew’s video contained many of the same landmarks, including a church in the background. 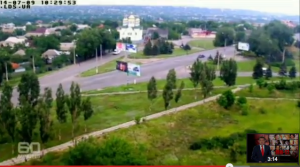 Screen shot from Australia’s “60 Minutes” update on its story about the shoot-down of Malaysia Airlines Flight 17. According to host Michael Usher, the image was taken from a traffic camera shortly before the MH-17 shoot-down on July 17, 2014.

But that’s irrelevant to the question of whether the July 17 “getaway” video matched up with the same intersection. Usher is trying to trick you as in a shell game by pretending that the fact that he and his crew found a scene matching what you see in a traffic camera is the same as finding the scene matching the “getaway.” They’re two entirely different points and nothing significant in the “getaway” video matches the scene of Usher’s intersection.

Usher then moved to his second sleight-of-hand by showing the one thing that supposedly does match up: a non-descript utility pole. In the update, he claimed that his crew found that matching pole along the roadway in Luhansk. Yet, except for some unexceptional electronic device strapped to the pole there is nothing else that looks the same. 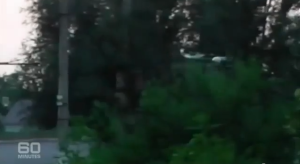 A screen shot from the so-called “getaway” video supposedly taken shortly after MH-17 was shot down showing the road that the suspected BUK anti-aircraft missile battery was taking. 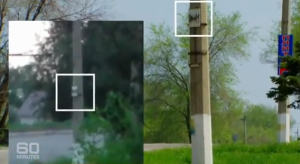 A screen shot from Australia’s “60 Minutes” update supposedly showing a utility pole in the “getaway” video and matching it up with a poll in an intersection of Luhansk in eastern Ukraine. However, note that the inset obscures the spot where a house appeared on the original video.

At this point, one has to wonder how premeditated Usher’s manipulation of the program’s viewers has become. You would think that showing the house would have been the slam dunk proof that Usher’s crew did find the right location. Instead, the program obscures exactly that spot.

Also, in the long-range view from the traffic camera, what you see is a commercial intersection with no house matching the house in the “getaway” video. The “getaway” scene after the MH-17 shoot-down clearly depicts a much woodsier setting than Usher’s intersection.

And, look at the two images of the poles and the surrounding areas. Except for the fairly routine electronic devices strapped to the poles, there really isn’t anything that looks the same. Below the pole in the “getaway” video there appears to be one band, yet in Usher’s there appear to be two. And, note the intense foliage to the right of the pole in the “getaway” video. It’s not there in Usher’s scene.

Yet, as Usher’s update rushes these images past the viewers, it’s hard for them to grasp all the quick editing moves that seem designed to deceive them. These deceptions are what Usher offers to seal the deal with his viewers.

Those camera tricks and the flurry of smug insults delivered by Usher (referring to skeptics of his presentation as “Kremlin stooges” and “Russian puppets”) reveal a newsman and a news show that are less than objective or professional.

If Usher had real evidence showing that he had found the spot where the “getaway” video was taken, why did he include something as irrelevant as the traffic-camera video while pretending that it was somehow probative, when it wasn’t?

And, why is his key evidence a non-descript pole that sits on a roadway that doesn’t match with the scene in the “getaway” video? And, why did his producers insert that “helpful” inset that obscures what would have been the only meaningful landmark in the “pole scene” the house that doesn’t appear to be there?

Initially, I had thought that blogger Eliot Higgins simply had given Usher and his team bad coordinates and they had made a serious but honest mistake. Generally, in journalism, before we accuse someone of mass murder even a demonized figure like Russian President Vladimir Putin we like to have real evidence, not misleading images. [See Consortiumnews.com’s “Fake Evidence Blaming Russia for MH-17?” and “You Be the Judge.”]

I had assumed that Usher and his team may just have gotten overly excited and jumped to a faulty conclusion. However, with the update and the additional fakery it now appears that they are engaged in a willful fraud.