Exclusive: An Australian news show bristled at being caught broadcasting misleading images designed to prove Russian President Putin was responsible for shooting down Malaysia Airlines Flight 17 last July. The program says it simply opted for “a wide shot” to give its audience the fuller “layout,” reports Robert Parry.

The Australian news show “60 Minutes” has angrily responded to my noting discrepancies between the footage that it used to claim it found the spot in eastern Ukraine where a BUK missile launcher passed after the Malaysia Airlines Flight 17 shoot-down last July and the video taken that day.

Earlier in the “60 Minutes” broadcast, the show made a point of overlaying other video from last July 17 with its own footage to demonstrate that it had found the precise locations passed by a truck suspected of hauling the missile battery eastward before the shoot-down. But the program deviated from that pattern regarding the most important video, which the program claimed proved that Russia had provided the missile that shot down MH-17 and that missile battery was making its getaway through Luhansk. 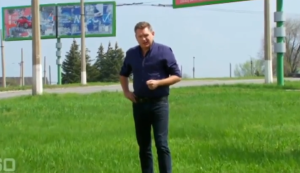 On that crucial point, the program separated the original video of a BUK anti-aircraft missile battery, apparently taken the night after the shoot-down, from the scene in which correspondent Michael Usher claims to have located the same site in Luhansk.

The separation of the two scenes made it difficult for viewers to note the many discrepancies. Indeed, almost nothing in the two scenes matched. In my article about these differences, I posted the two images from the TV show side by side so readers could decide for themselves. 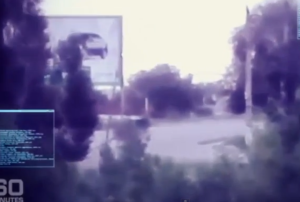 A screen shot of the roadway where the suspected BUK missile battery supposedly passed after the shoot-down of Malaysia Airlines Flight 17 on July 17, 2014. (Image from Australian “60 Minutes” program)

In the “60 Minutes” program, Usher offered no explanation for why the pattern of using overlays was broken in this one instance. Nor did the program make any effort to explain the multiple discrepancies in the two images.

In reacting to my article, however, the show issued a statement saying that in deciding where locations were it relied on calculations by blogger Eliot Higgins “done from his house in Leicester,” England. The show then explained the discrepancies between the earlier video, as posted on social media, and the show’s footage in Luhansk, Ukraine, this way:

“We opted to do our piece to camera as a wide shot showing the whole road system so the audience could get the layout and see which way the Buk was heading. The background in our piece to camera looks different to the original Buk video simply because it was shot from a different angle. The original video was obviously shot from one of the apartments behind, through the trees — which in in summer were in full leaf.”

So, the show is acknowledging that it intentionally deviated from the previous pattern of using overlays to demonstrate how precisely its team had located earlier scenes in question. But it’s simply not true that by offering this “wide shot showing the whole road system” that the audience would “get the layout and see which way the Buk was heading.”

All you see is Usher standing on open ground gesturing to a billboard. How any Australian viewer would get a deeper understanding of the geography of Luhansk from this “wide shot” is a mystery. And you don’t get much sense of “the whole road system” either. In other words, the explanation sounds more like an excuse or a cover-up.

Given the pattern of the rest of the show, wouldn’t it have made more sense to try to recreate the angle of the original video to prove the actual location as best you could rather than opting for a different angle and simply relying on Usher to make an assertion? There’s an old saying in journalism, “show, don’t tell,” but this was a classic case of telling, not showing.

And this was not some minor point. This was proof cited by the program to say Russian officials were lying when they placed the scene of the “getaway” BUK launcher in the town of Krasnoarmiis’k, northwest of Donetsk and then under Ukrainian government control. Usher dismissed that Russian claim as a lie and cited the billboard scene in Luhansk as the final proof that Russian President Vladimir Putin was responsible for killing 298 people aboard MH-17.

If the show wanted to truly nail down this significant point and was really interested in giving its viewers “the layout” of the scene in Luhansk, wouldn’t it also have made sense to have footage of the apartments where the original video was supposedly shot? That would have provided some explanation for the obvious discrepancies in the two images. Instead, the show simply broke the two video scenes up in a way so a casual viewer wouldn’t be able to detect the discrepancies.

The Australian show also takes issue with me writing that Usher appeared to be standing in “an open field.” The show protests that “he is on a patch of grass by the road” although it sure looks like an open field in the “wide shot” giving us “the layout.”

The show further protests my characterization of the scene in the original video as “overgrown,” saying “it was simply shot through trees in the foreground.” But note the trees and bushes along the right of the image and in the background. Beyond the positioning of this overgrowth, there appears to be almost nothing comparable between the two images, including the positioning and shapes of the billboards.

Yet, instead of grappling with these differences or trying to recreate the angle of the original video as closely as possible, the show opts for some meaningless “wide shot,” makes it difficult for anyone watching the show to compare the two scenes that flash by fairly quickly, and simply asserts as flat fact something that is still dubious that Usher and his team had located the right spot.

That strikes me as journalistically negligent if not willfully misleading. But look at the images. You be the judge.