Exclusive: The Israeli-Saudi alliance and the American neocons are furious over the framework agreement for a peaceful settlement to the Iran nuclear dispute, but the deal gives hope to people who see the need to end the perpetual wars that have roiled the Middle East and deformed the U.S. Republic, writes Robert Parry.

The April 2 framework agreement with Iran represents more than just a diplomatic deal to prevent nuclear proliferation in the Middle East. It marks a crossroad that offers a possible path for the American Republic to regain its footing and turn away from endless war.

Whether that more peaceful route is followed remains very much in doubt, however, given the adamant opposition from Israeli Prime Minister Benjamin Netanyahu and his Sunni Arab allies in Saudi Arabia and other oil-rich sheikdoms. On Thursday, Netanyahu continued his denunciations of the deal — saying it would “threaten the survival of Israel” — and no one should underestimate the Israel Lobby’s power over Congress. 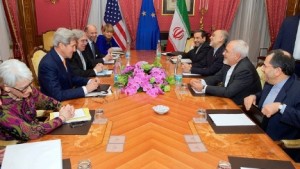 Secretary of State John Kerry and his team of negotiators meeting with Iran’s Foreign Minister Javad Zarif and his team in Switzerland on March 26, 2015. (State Department photo)

But the choice before the American people is whether they want to join a 1,300-year-old religious war in the Middle East between Sunnis and Shiites with Israel now having thrown in its lot with the Sunnis despite the fact that Saudi Arabia and its cohorts have been supporting Al-Qaeda and Islamic State terrorists.

Despite blame also falling on Iran and the Shiite side in this sectarian conflict, the Iranians have emerged as the most effective resistance to Al-Qaeda, which carried out the 9/11 attacks killing some 3,000 Americans, and to the Islamic State, which has engaged in and franchised out to other extremist groups the practice of chopping off the heads of Americans, Christians, Shiites and other “apostates.”

Though the Saudi royal family and other Sunni princes around the Persian Gulf deny that they support Al-Qaeda and the Islamic State, few knowledgeable people believe them, since the jihadists follow Saudi Arabia’s Wahhabist fundamentalist teachings and have consistently served Saudi interests as the frontline fighters in the Sunni-Shiite conflict. [See Consortiumnews.com’s “The Secret Saudi Ties to Terrorism.”]

Plus, Saudi Arabia and Israel have made clear that they would prefer the Sunni fighters, even Al-Qaeda and the Islamic State, to prevail over governments and other forces linked to Iran. The Saudi-Israeli alliance has provided real military assistance to these Sunni jihadists.

For instance, the current Saudi bombing campaign against Houthi rebels in Yemen (who practice a form of Shiite Islam) has served to bolster Al-Qaeda in the Arabian Peninsula, including aiding in a prison break that released scores of hardened Al-Qaeda militants. A source familiar with the Yemeni conflict told me that the Saudis also are giving Al-Qaeda weapons supplied by Israel.

In the Syrian civil war, senior Israelis have made clear they would prefer Sunni extremists to prevail over President Bashar al-Assad, who is an Alawite, an offshoot of Shiite Islam. Assad’s relatively secular government is seen as the protector of Shiites, Christians and other minorities who fear the vengeful brutality of the Sunni jihadists who now dominate the anti-Assad rebels and have absorbed the U.S.-trained “moderates” into the extremist ranks.

In September 2013, Israeli Ambassador to the United States Michael Oren told the Jerusalem Post that Israel favored the Sunni extremists over Assad and the Shiites. “The greatest danger to Israel is by the [Shiite] strategic arc that extends from Tehran, to Damascus to Beirut. And we saw the Assad regime as the keystone in that arc,” Oren said in an interview.

In June 2014, Oren expanded on this Israeli position. Then, speaking as a former ambassador, Oren said Israel would even prefer a victory by the Islamic State. “From Israel’s perspective, if there’s got to be an evil that’s got to prevail, let the Sunni evil prevail,” Oren said.

This Israeli preference has extended into a tacit alliance with Al-Qaeda’s Nusra Front in Syria, with which the Israelis have what amounts to a non-aggression pact, even caring for Nusra fighters in Israeli hospitals and mounting lethal air attacks against Lebanese and Iranian advisers to the Syrian military fighting Nusra forces.

Netanyahu himself has played down the danger from the Islamic State (or ISIS) when compared to what he claims is the greater Iranian threat. In his March 3 address to a cheering and hooting U.S. Congress, Netanyahu depicted ISIS as a minor annoyance with “butcher knives, captured weapons and YouTube” when compared to Iran, which he accused of “gobbling up the nations” of the Middle East.

He claimed “Iran now dominates four Arab capitals, Baghdad, Damascus, Beirut and Sanaa. And if Iran’s aggression is left unchecked, more will surely follow. We must all stand together to stop Iran’s march of conquest, subjugation and terror.”

But Netanyahu was engaging in hyperbole at best. Of those four capitals cited, Iran took none by force; no invasions had occurred. In the case of Syria and Iraq, Iran has been helping the established governments withstand assaults from the Islamic State and, in Syria, Al-Qaeda’s Nusra Front as well.

Regarding Yemen, Netanyahu and the Saudis have sought to portray the conflict as a case of Iranian “aggression,” but those claims border on the ludicrous. The Houthi rebels, who have gained control of several large Yemeni cities including the capital Sanaa, follow an offshoot of Shiite Islam known as Zaydism, but it is relatively close to Sunni Islam and has peacefully co-existed with Sunni Islam for centuries.

The Houthis also deny that they are agents for Iran, and Western intelligence services believe that Iranian support has consisted mostly of some funding. Former CIA official Graham E. Fuller has called the notion “that the Houthis represent the cutting edge of Iranian imperialism in Arabia as trumpeted by the Saudis” a “myth.” He added:

“The Zaydi Shia, including the Houthis, over history have never had a lot to do with Iran. But as internal struggles within Yemen have gone on, some of the Houthis have more recently been happy to take Iranian coin and perhaps some weapons — just as so many others, both Sunni and Shia, are on the Saudi payroll. The Houthis furthermore hate al-Qaeda and hate the Islamic State.”

In other words, the alarmist rhetoric from Netanyahu and the Saudis about the Houthis is hyped. And the Obama administration’s decision to assist the Saudi air strikes inside Yemen, including some attacks that have inflicted heavy civilian casualties, would seem to be undermining the U.S. goal of combating Islamic terrorism by strengthening Al-Qaeda.

Helping the Saudis kill Yemenis also contradicts the high-blown U.S. rhetoric denouncing Russia for intervening in a civil war in Ukraine, on Russia’s border. One can only imagine the fiery U.S. rhetoric if Russia launched air strikes against the neo-Nazi militias and other Ukrainian forces fighting on behalf of the U.S.-backed Kiev regime.

In Ukraine, when elected President Viktor Yanukovych fled to Russia to escape a violent coup on Feb. 22, 2014, the Obama administration cited Yanukovych’s departure as proof that he had vacated his office, thus justifying the appointment of a new president without the bother of following Ukraine’s constitution. Ukrainians who resisted Yanukovych’s ouster were deemed “terrorists” and any subsequent intervention by the Russians to protect the ethnic Russians under assault was decried as “aggression.”

Yet, when ousted Yemeni President Abd Rabbuh Mansur Hadi fled to Saudi Arabia, the Obama administration took the opposite position: Hadi’s departure was not proof that he had vacated his office but rather justification to bomb the Yemenis who had replaced him even if that helped actual terrorists in Al-Qaeda another case of what’s good for the goose is not good for the gander.

Hope for the Republic

However, more significant for Americans is that the diplomatic agreement between world powers and Iran to tightly restrict its nuclear program to ensure that it’s for peaceful purposes only is that the deal repudiates the calls for war from Netanyahu and leading American neoconservatives. [See Consortiumnews.com’s “NYT Publishes Call to Bomb Iran.”]

Bombing Iran’s nuclear facilities could cause a massive human and environmental catastrophe, unleashing radiation on civilian populations and possibly making large swaths of Iran uninhabitable. That might serve the Saudi-Israeli interests by forcing Iran to focus exclusively on a domestic crisis of the first order.

Thus, Iran might be unable to assist the Iraqis and the Syrians in their desperate struggles against Al-Qaeda and the Islamic State. Prime Minister Netanyahu and former Ambassador Oren might get their preference and see Sunni jihadists hoisting the black flag of Al-Qaeda or the Islamic State over Damascus, if not Baghdad.

But such a victory, with its attendant slaughter of innocents and the prospects of new terrorist attacks on the West, would almost surely force whoever is the U.S. president to recommit hundreds of thousands of U.S. troops to remove Al-Qaeda or the Islamic State from power. It would be a war of vast expense in money and blood with little prospect of American success.

Beyond the death of many U.S. soldiers, there would be an equally certain death of the American Republic, since the United States would have to become a fully militarized state dedicated to perpetual war. That might please — and profit — the neocons but it would be a tragedy for those Americans who believe in constitutional principles and democratic ideals. [See Consortiumnews.com’s “A Family Business of Perpetual War.”]

That is why the framework agreement with Iran offers a hope, albeit perhaps a thin one, that the United States can now separate itself from the endless war demands of Israel and Saudi Arabia and chart a course home to a more peaceful harbor where our constitutional system might have a chance to repair.

13 comments for “Iran Deal: A Possible Crossroads to Peace”