With U.S. intelligence help, Saudi Arabia has launched air strikes into Yemen and wants Egypt and Pakistan to invade, threatening to turn a long-simmering civil war into a regional conflict, a scenario that reminded retired U.S. diplomat William R. Polk of his work for President Kennedy on an earlier Yemeni war.

As the events unfold with the Saudi and Egyptian engagement in Yemen, I was reminded of my discussion with Egypt’s President Gamal Abdel Nasser on “his” Yemen war, sometimes called the North Yemen Civil War that began in 1962, became a stalemate and finally ended in 1970. As Mark Twain may have said, “history doesn’t repeat but sometimes it rhymes.” The rhymes, at least, seem unmistakable.

In the course of our first lengthy talk on Yemen, Nasser (rather angrily) replied to one of my comments, “you don’t think I will win the war, do you?” 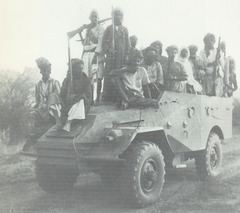 A scene from the North Yemen Civil War of the 1960s.

“Well, you would be surprised to know that I have acquired your [America’s] secret analyses of guerrilla warfare.”

“Oh, Mr. President,” I shook my head, “I know the people who wrote those reports. They are rubbish. I would throw them away if I were you.”

He just looked at me, even more angrily, thinking I suppose, that having pulled off an intelligence coup, I was trying to trick him by claiming that it was really not a coup but a mistake. Then he said, “I know how to use helicopters, too.”  (Their use was then being touted by our military as our great weapon against the Viet Minh fighters in Vietnam.)

“And you lost one yesterday, didn’t you?”  I jibed.

“How did you find out about that?”

“Well, Mr. President, we spend a lot of money on the CIA finding out about such things and one way or another they usually do. That is what the CIA is supposed to do  They don’t always succeed but sometimes they do.”

“Well,” Nasser retorted, “you American’s think you know all about everything, and you don’t even have any of your people in Sanaa and none up in the north where the fighting is going on. You don’t know anything about Yemen.” Then, without thinking of the implication, I suppose, he said, ” You should go see.”

“Mr. President,” I quickly said. “I regard that as an invitation.” Impolitely, I then stood up. He looked at me with narrow, angry eyes. He obviously had not meant what I had inferred.

“All right, go see,” he said. “I will give instructions that you can go anywhere you want, talk to anyone you want, see everything..”

“But, of course, I cannot even get there without your help,” I said.

“You can have my plane.”

Rather off-handedly and not warmly, we shook hands. I said goodbye and rushed back to our embassy and wrote an “eyes only” message to  President John Kennedy. I did not want it scattered around our government so I prevailed upon the CIA station chief to send it by his rather more restricted route. It was encrypted and sent in three batches. Before the second batch got sent, a reply came back: “go.”

So I went, and Nasser was as good as his word. I spent hours with his military commander, Abdul Hakim Amr who gleefully unfolded the huge map of showing the planned Egyptian sweep of the mountains to the east (while Anwar Sadat, then rather on the fringes of the Egyptian Establishment, angrily protested against Amr’s indiscretion with a foreigner. He never forgave me for being there).

I went up to the supposed battle zone, near Saada, went out to all the villages where the war was, according to the CIA and British intelligence, being fought,  met with the new Yemeni Leader Sallal and all the new Yemeni leaders, and then flew back to Cairo.

Disclosure (as they like to say in the media): I was bribed. As a going-away present, I was given 500 pounds of Yemeni coffee. Nothing so welcome to a traveler as 500 pounds of anything! But thanks to me, our Cairo embassy was “in coffee” for years!

I did not see President Nasser on my return but sent him a message through the Governor of Cairo, Salah Dessouki, that I hoped to go down to the Saudi-Yemen frontier to meet with the guerrilla leaders, and somewhat jokingly I said to my friend Salah, “I want to be very sure that President Nasser knows exactly where I am going. And,Salah, please tell the President not to do anything silly.”

Salah burst out laughing and said, “Bill, I certainly will not say that to the President!”

So I flew to Riyadh and, with the permission of then Crown Prince Faisal, with whom I had a rather close relationship, I took the American ambassador’s airplane and flew down to Najran where I spent an evening with a group of the guerrilla leaders.

As we sat around a campfire, outside of Najran, we drank tea, ate a lamb roast and then, in a fairly typical desert encounter, we had a poetry duel. By pure luck, I happened to know the poem being recited and I capped the verse of one of the men. In their terms, that was like a passport for me. And we could then have a serious and frank  discussion on the war, the strengths and weaknesses of the royalist forces and what might bring the war to a conclusion.

Our talk went on almost all night. Finally, just at first light, I had barely gotten to sleep when the first of four Egyptian but Russian-piloted TU 16 jet bombers arrived overhead from Luxor. They dropped 15 200 kg bombs on the oasis and on us. My pilot was just worried about his plane. The rest of us had other worries!

The biggest danger, in fact, was from the shrapnel falling from the anti-aircraft cannon. They were totally ineffective against the TU 16s as they could not reach them. (One of my aides, an Air Force colonel informed me that the TU-16s were at about 23,000 feet and the 90 mm cannon would reach about 18,000 feet.)

But a few people around us were killed. Another of my aides, a Marine Colonel, presented me with a wicked looking piece of one of the bombs. It had fallen or been blown not far from the place I was lying.

On our return flight to Riyadh, I wrote Nasser a “thank you” note, saying “Mr. President, I am most grateful for your kind hospitality in Egypt and Yemen, but I don’t think you needed to entertain me in other countries.”

Our ambassador, my good and old friend, John Badeau, was not amused. He said, “Bill, just say thank you and, please, don’t hurry back!”

It was a few months later when I next saw President Nasser. We had a long  and very frank talk then about Yemen. I compared it to Vietnam which I was already sure would be a disaster. I pointed to the huge cost to us of Vietnam, how it disrupted all our domestic social goals and how it poisoned Americans trust in one another. I warned that in my opinion, Yemen might do the same to Egypt, disrupting what Nasser was trying to do to uplift his people and end their tragic poverty.

In our talk, Nasser said, “I certainly didn’t agree with you, Bill, but I knew you would tell me the truth as you saw it.” Somehow, the Israelis found out about this and later the chief of Prime Minister Golda Meir’s cabinet, Mordachai Gazit told me, “We know that President Nasser trusts you.”

As I was leaving, Nasser took me out to my car and even opened the car door for me. His guards were as astonished as I was, Apparently, he had never before done this. As we shook hands, he said, “Well, Bill, where are you off to this time?”

“This time, Mr. President, I am not going to tell you!”

He burst out laughing as did I. We did not meet again but our frankness and respect later enabled me to work out the 1970 ceasefire on Suez with him shortly before his death.

It is hard to believe that history now seems to be repeating with Egypt and Saudi Arabia again engaged in a counter-guerrilla war in Yemen! For Nasser, it was Egypt’s Vietnam. Will the new Yemen war be Egypt’s (and Saudi Arabia’s) Afghanistan? I think it is very likely. All of the signs point in that direction.

And, as I have laid out in numerous essays on Afghanistan, Iraq, Syria, Somalia, Mali and Algeria, and in my little book Violent Politics, guerrilla wars are almost never “won” but usually drain the supposedly dominant power of its wealth, moral position and political unity.

6 comments for “Yemen as Vietnam or Afghanistan”