The U.S. military insists its drones and other high-tech gadgets can kill “bad guys” with an unmatched precision. But these assassination weapons may just be the latest example of putting too much faith in the murderous technology of war, as Andrew Cockburn explains in a new book reviewed by Chuck Spinney.

What makes Andrew Cockburn’s Kill Chain: The Rise of the High Tech Assassins so powerful, in my opinion, is not only his sourcing and detail (which are amazing), but the fact that he has written a book that is at once overwhelming in terms of information, yet so well written, it is accessible to the general reader. It is a page turner.

Cockburn dissects the rise of drone warfare and examines its conduct in fascinating detail from the point of view of the targeteers in the CIA and the White House, to the controllers in front of video screens, and to the effects on the victims at the receiving end. 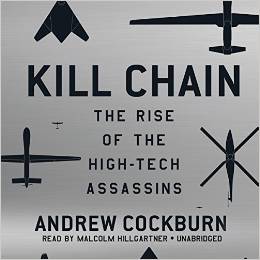 In so doing, Cockburn shows how the ideology of drone warfare is really old wine in a new bottle: it is a natural evolution of three interconnected mindsets: (1) the flawed ideas underpinning the now-discredited theory of strategic bombing in WWII; (2) the search for perfect information embodied in disastrous all-knowing, all-seeing electronic battlefield (starting with Robert McNamara’s electronic line of Vietnam); and (3) the search for surgical precision in both conflict and coercive diplomacy embodied, for example, in the simplistic targeting theories underpinning the drug war and the primitive escalate-the-pressure tactics of precision targeted sanctions.

At the roots of these three ideologies, I would argue, is an unchanging three-part set of propositions woven together in the 1930s by the evangelical instructors in the Army Air Corps Tactical School. They preached the theory of victory through airpower alone, and they believed that only strategic bombing could justify an independent Air Force on a par with the Army and the Navy, with comparable or even larger budgets.

These future leaders of the Air Force constructed a seductive tautological argument, based on the fallacious assumptions of having extensive a priori knowledge of the enemy’s inner workings coupled to perfect combat intelligence.

It remains unchanged to this day and goes like this: (1) The enemy is a physical system or network made up of critical linkages and nodes, be they ball bearing works in Schweinfurt, Salafi fanatics in Iraq with access to cell phones and the internet, or Pashtun warlords in the hills of Afghanistan.

(2) The enemy system can be reliably analyzed and understood from a distance, making it possible to exactly identify those specific nodes or links that are vital to the functioning of the adversary system, be it an industrial power like Germany, a tribal alliance in Yemen, or the financial links of a terrorist network or foreign oligarchy.

(3) That past failures are irrelevant because new technologies will provide the wherewithal to attack and destroy these vital nodes or links with precision strikes and thereby administer a mortal wound to the adversary.

In short, the conduct of war is an engineering problem: In the current lexicon of the Pentagon and its defense contractors, the enemy is a “systems of systems” made up of high value targets (HVTs) that can be identified and destroyed without risk from a distance with unmanned systems, and the military-technical revolution makes any past failures irrelevant to current capabilities.

The reasoning is identical to that described in the preceding paragraph. Yet despite stridently confident predictions of decisive precision effects, from the days of the Norden bombsight in B-17s to those of the Hellfire missile fired by drones, this theory has failed over and over to perform as its evangelists predicted and are still predicting. The need to dismiss these past failures is why the never-ending promise of a military-technical revolution is central to the maintenance of the ideology.

Viewing war as an engineering problem focuses on technology (which benefits contractors) and destructive physical effects, but this ideology ignores and is offset by the fundamental truth of war: Machines don’t fight wars, people do, and they use their minds.

Our technology’s physical effects can be, and often are, offset or mitigated by our opponent’s mental counters or initiatives, reflecting both his adaptability and unpredictability, and his moral strengths, like resolve and the will to resist.

Combat history has proven over and over that mental and moral effects can offset physical effects, for example, when the destruction of ball bearing factories did not have its predicted effects in WWII, when bicycles carrying 600 pounds of supplies were used to bypass destroyed bridges on the Ho Chi Minh Trail, and when the Serbs used cheap microwave ovens to fool expensive anti-radiation missiles in Kosovo.

And as Cockburn shows, this has proven true again in the ongoing war on terror, and its mirror image, the war on drugs.

Cockburn has provided a highly readable, and logically devastating story, written from a bottom-up empirical perspective. He explains why our strategy in Yemen was doomed to fail, as indeed it has in recent weeks.

His meticulously referenced historical and empirical research makes this book hard to pick apart. No doubt, there are some small errors of fact. For example, not all the drone/bombers deployed in ill-starred Operation Aphrodite (which blew up JFK’s elder brother) in 1944 were B-24s as Cockburn incorrectly suggests; the operation also used B-17s. But I defy anyone to find a single thread or family of threads that can be used to unravel his tapestry.

Disclaimer: The author of this book is a friend of 35 years, so I am biased, proudly so in this case. While I know what Cockburn can do, I must admit I was literally blown away by this book. And I am no stranger to this subject, having worked as an engineer-analyst in the Office of the Secretary of Defense in the Pentagon for 25 years.

Chuck Spinney is a former military analyst for the Pentagon who was famous for the “Spinney Report,” which criticized the Pentagon’s wasteful pursuit of costly and complex weapons systems. [The article appeared originally at his blog.]