The neocon proponents of endless war are determined to sink the nuclear talks with Iran and clear the decks for another U.S. war in the Middle East, but the fallout from such a diplomatic failure would devastate American interests, write Flynt and Hillary Mann Leverett.

Stakes in the nuclear talks between Iran and the P5+1 couldn’t be higher for the countries involved, especially for the United States. After nearly a decade and a half of disastrously self-damaging wars, “counter-terrorism campaigns,” and military occupations in the Middle East, the dysfunction and incoherence of U.S. policy is now on full display, from Iraq to Libya, Syria, and now Yemen.

To recover, Washington must accept on-the-ground realities: U.S. efforts to dominate the region have failed and the Islamic Republic of Iran is now a rising power with which America must come to terms. 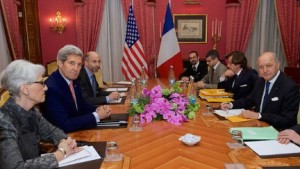 Secretary of State John Kerry meets with his diplomatic team and their French counterparts during negotiations with Iran over its nuclear program in Switzerland on March 28, 2015. (State Department photo)

But President Barack Obama has yet to explain why the United States, for its own interests, not as a favor to Iran, or simply because Americans are war-weary, needs rapprochement with the Islamic Republic.

Absent such advocacy, his administration may still reach a nuclear deal with Iran. But it will lose the political fight at home over a new Iran policy, squandering the chance for a broader strategic opening with Tehran and locking the United States into increasingly steep strategic decline in the Middle East and globally.

Today, America cannot achieve any of its high-priority goals in the Middle East, e.g., combating the Islamic State, forestalling another violent Taliban takeover in Afghanistan, and resolving conflicts in Syria and Yemen, without better ties with Iran.

Under any political order, Iran is a pivotal country, given its demographic and territorial size, its geostrategic location, its identity as a civilizational state with a history as long as China’s, and its hydrocarbon resources. But, under the Islamic Republic, which, since the 1979 Iranian Revolution, has worked to forge an indigenously-designed political system combining participatory politics and elections with elements of Islamic governance, and to pursue foreign policy independence, Iran enjoys a powerful legitimacy that bolsters its regional impact.

For too many Americans, 35 years of demonizing caricature mask an essential fact: the Islamic Republic of Iran, as the Middle East’s only successful participatory Islamist order, has been able to pursue an independent foreign policy that has steadily bolstered its influence in critical arenas across the Middle East.

If America is to recover its strategic position, it must devise a fundamentally different relationship with this rising power. It must do so not only because of Iran’s unique importance, but also as a first step toward coming to terms with Middle Eastern Muslims’ manifest desire, reflected in polls and in electoral outcomes whenever they get to vote in a reasonably open way, to define their political futures in terms of participatory Islamism and foreign policy independence.

Ignoring these realities, the Obama administration treats a nuclear deal as, at most, a “nice to have” option. Obama rarely identifies potential U.S. gains from realigning relations with Iran; instead, he stresses how Washington is providing Tehran with an “opportunity” to “benefit from rejoining the international community.”

It’s probably never a good idea to try selling a politically controversial diplomatic initiative by stressing the initiative’s presumptive benefits for the other side. To the extent that the Obama administration has touched on potential upsides for the United States, it has done so in narrowly technical terms, positing that a multilateral agreement is the most cost-effective way to manage theoretical proliferation risks associated with Iran enriching uranium under international safeguards (risks posed by uranium enrichment in any country).

This restricted focus opens U.S. diplomacy up to three major problems. First, it conditions U.S. demands on Tehran with no grounding in the Nuclear Non-Proliferation Treaty or other aspects of international law.

This may seem useful to show constituencies in the United States and allied countries that the Obama administration is putting Iran’s nuclear capabilities in a very tight “box”, e.g., by requiring the dismantling of an arbitrarily large number of Iranian centrifuges or refusing to lift UN Security Council sanctions on Iran for years into the implementation of an agreement.

But it also makes clear that America is not prepared to deal with the Islamic Republic as the legitimate representative of legitimate Iranian interests, the only basis for real rapprochement.

In the 1970s, the Carter administration insisted that the SALT II agreements it had negotiated with the Soviet Union put meaningful limits on the growth of Moscow’s strategic arsenal. But this technical argument was trumped by more politically resonant claims that SALT II left an unreconstructed Soviet adversary with too much nuclear capability; ultimately, congressional opposition killed SALT II.

If Obama does not make the case for a nuclear deal as a catalyst for broader (and strategically imperative) rapprochement with Tehran, he will face mounting political pushback against meeting U.S. commitments essential to implementing a deal.

Third, Obama’s posture makes it increasingly probable that the geopolitical benefits of diplomatically resolving the nuclear issue will accrue primarily not to the United States, but to China and Russia.

It seems all too likely that the Obama administration will continue to resist packaging a nuclear deal as part of comprehensive, “Nixon to China” rapprochement with Tehran. It seems virtually certain that, under a deal, the administration will only commit to “waive” America’s Iran-related sanctions, for six months at a time, through the balance of Obama’s presidency.

Indeed, senior administration officials told Congress last week that current sanctions legislation should stay on the books until a deal’s end, years from now, so that Washington can continue leveraging Tehran’s actions.

By contrast, even before a nuclear deal is concluded, Beijing and Moscow are laying the ground to deepen their already significant economic and strategic cooperation with Iran. (Both Chinese President Xi Jinping and Russian President Vladimir Putin will visit Tehran this spring.)

The Obama administration’s technically reductionist approach to Iran relations raises the risks that what should be the greatest triumph of American diplomacy since the U.S. opening to China in the 1970s will end up exacerbating America’s ongoing marginalization in the Middle East.

Flynt Leverett served as a Middle East expert on George W. Bush’s National Security Council staff until the Iraq War and worked previously at the State Department and at the Central Intelligence Agency. Hillary Mann Leverett was the NSC expert on Iran and from 2001 to 2003  was one of only a few U.S. diplomats authorized to negotiate with the Iranians over Afghanistan, al-Qaeda and Iraq. They are authors of  Going to Tehran. [This story appeared at http://goingtotehran.com/snatching-defeat-from-the-jaws-of-victory-the-case-for-u-s-iranian-rapprochement-that-obama-must-still-make-leveretts-in-the-national-interest]

4 comments for “The Big Upside of an Iran-Nuke Deal”