Exclusive: A new truce agreement in Ukraine rekindles hope that the bloodshed can be reduced if not stopped, but Official Washington’s gross misunderstanding of the crisis, blaming everything on Russia’s President Putin, raises doubts and portends a potentially grave catastrophe, writes Robert Parry.

The original falsehood behind the Iraq War was that Saddam Hussein had weapons of mass destruction and intended to use them against America either directly or by giving them to al-Qaeda. The opening lie about the Ukraine crisis was that Russian President Vladimir Putin instigated the conflict as part of some Hitlerian plan to conquer much of Europe.

Yet, while the Hussein-WMD claim was hard for the common citizen to assess because it was supposedly supported by U.S. intelligence information that was kept secret, the Putin-Ukraine lie collapses under the most cursory examination based simply of what’s publicly known and what makes sense. 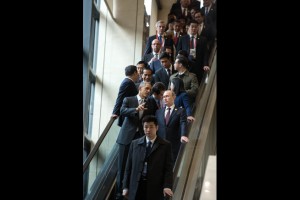 President Barack Obama talks with President Vladimir Putin of the Russian Federation as they join other leaders en route to the APEC Family Photo at the International Convention Center in Beijing, China, Nov. 11, 2014. (Official White House Photo by Pete Souza)

Nevertheless, the New York Times much as it did when it was falsely reporting breathlessly about “aluminum tubes” for Iraq’s non-existent nuclear weapons program continues to promote U.S. government propaganda about Ukraine as fact and dismisses any rational assessment of the situation as crazy.

On Friday, the Times concluded its lead editorial with the assertion that: “What remains incontrovertible is that Ukraine is Mr. Putin’s war.” But the point is anything but “incontrovertible.” Indeed, the crisis was most certainly not instigated by Putin.

The actually “incontrovertible” facts about the Ukraine crisis are these: The destabilization of President Viktor Yanukovych’s elected government began in November 2013 when Yanukovych balked at a proposed association agreement promoted by the European Union. He sought more time after the sticker shock of learning from Kiev economic experts that the deal would cost Ukraine $160 billion in lost revenue by cutting trade with Russia.

It was German Chancellor Angela Merkel, not Vladimir Putin, who pushed the EU agreement and miscalculated the consequences, as the German newsmagazine Der Spiegel has reported. Putin’s only role in that time frame was to offer a more generous $15 billion aid package to Ukraine, not exactly a war-like act.

Yanukovych’s decision to postpone action on the EU association prompted angry demonstrations in Kiev’s Maidan square, largely from western Ukrainians who were hoping for visa-free travel to the EU and other benefits from closer ties. Putin had no role in those protests and it’s insane to think that he did.

In February 2014, the protests grew more and more violent as neo-Nazi and other militias organized in the western city of Lviv and these 100-man units known as “sotins” were dispatched daily to provide the muscle for the anti-Yanukovych uprising that was taking shape. It is frankly nutty to suggest that Putin was organizing these militias. [See Consortiumnews.com’s “When Is a Putsch a Putsch.”]

By contrast, there is substantial evidence that senior U.S. officials were pushing for a “regime change” in Kiev, including an intercepted phone call and various public statements.

In December 2013, Assistant Secretary of State Victoria Nuland, a neocon holdover, reminded Ukrainian business leaders that the United States had invested $5 billion in their “European aspirations.” In early February, she discussed with U.S. Ambassador Geoffrey Pyatt who the new leaders of Ukraine should be. “Yats is the guy,” she declared, referring to Arseniy Yatsenyuk. [See Consortiumnews.com’s “Who’s Telling the Big Lie on Ukraine?”]

The Maidan uprising gained momentum on Feb. 20, 2014, when snipers around the square opened fire on police and protesters touching off a violent clash that left scores of people dead, both police and protesters. After the sniper fire and a police retreat — carrying their wounded — the demonstrators surged forward and some police apparently reacted with return fire of their own.

But the growing evidence indicates that the initial sniper fire originated from locations controlled by the Right Sektor, extremists associated with the Maidan’s neo-Nazi “self-defense” commandant Andriy Parubiy. Though the current Ukrainian government has dragged its feet on an investigation, independent field reports, including a new one from BBC, indicate that the snipers were associated with the protesters, not the Yanukovych government as was widely reported in the U.S. media a year ago.

The worsening violence led Yanukovych to agree on Feb. 21 to a deal guaranteed by three European countries. He accepted reduced powers and agreed to early elections so he could be voted out of office. Yet, rather than permit that political settlement to go forward, neo-Nazis and other Maidan forces overran government buildings on Feb. 22, forcing Yanukovych and his officials to flee for their lives.

In other words, there is plenty of evidence that the Ukraine crisis was started by the EU through its mishandling of the association agreement, then was heated up by the U.S. government through the work of Nuland, Pyatt and other officials, and then was brought to a boil by neo-Nazis and other extremists who executed the coup.

Is the New York Times really suggesting that Putin pulled the strings on the likes of Merkel and Nuland, secretly organized neo-Nazi brigades, and ruthlessly deployed these thugs to Kiev to provoke violence and overthrow Yanukovych, all while pretending to try to save Yanukovych’s government all so Putin could advance some dastardly plot to conquer Europe?

Beyond the lack of evidence to support this conspiracy theory, there is no rational motive for Putin to have done what the Times claims that he did.

In the actual chronology of event, Putin was preoccupied with the Winter Olympics in Sochi when the Ukraine crisis took its turn for the worst a year ago. He was fearful that the Olympics would be marred by Chechen or other terrorism and thus was personally overseeing security.

Putin had spent some $40 billion on making the Olympics a glamorous show to introduce the new Russia to the world as a country ready to join the West. I’m told that he was very proud of Russia’s position in the G-8 and felt he had built a constructive relationship with President Barack Obama by helping him resolve crises in Syria and Iran in 2013.

The last thing Putin wanted to do was provoke a crisis in Ukraine. Nor is there any intelligence that he had designs on the Baltic States, as the conspiracy theory contends.

However, when a right-wing regime seized power in a violent coup in Ukraine on Russia’s border and then took provocative actions against Ukraine’s ethnic Russians, Putin responded to calls from Crimea both from its parliament and a referendum to take the peninsula back into Russia.

Putin also feared that the new powers in Kiev might give the historic Russian naval base at Sevastopol to NATO with its nuclear-armed submarines. In other words, as much as the New York Times has bandied about claims of a Russian “invasion” of Crimea, the Crimeans requested Russia’s intervention and up to 25,000 Russian troops were already there in the agreement with Ukraine over the naval base.

But the key point is that Putin was reacting to the Ukraine crisis, not instigating it. As even former Secretary of State Henry Kissinger explained to Der Spiegel, “The annexation of Crimea was not a move toward global conquest. It was not Hitler moving into Czechoslovakia.”

Kissinger added, “Putin spent tens of billions of dollars on the Winter Olympics in Sochi. The theme of the Olympics was that Russia is a progressive state tied to the West through its culture and, therefore, it presumably wants to be part of it. So it doesn’t make any sense that a week after the close of the Olympics, Putin would take Crimea and start a war over Ukraine.”

In this case, Kissinger is clearly right. It never made any sense for Putin to provoke the Ukraine crisis. Yet, that became the lie upon which the United States has built its increasingly aggressive policies over the past year, with politicians of all stripes now shouting that America must stand up to the madman Putin and “Russian aggression.”

This is a dangerous “group think” for a number of reasons, not the least the disturbing fact that both the United States and Russia have lots of nuclear weapons. On a less existential level, the “Putin-is-Hitler” analogy has prompted a major miscalculation on the right approach for the Obama administration to take vis a vis Putin.

As Harvard Professor Stephen M. Walt has noted, the most effective response to a crisis is different if a foreign leader is an aggressor on the march or if the leader feels cornered. The former calls for a “deterrence model,” i.e., a tough reaction. But a tough response in the latter case will only make the beleaguered leader more belligerent like a cornered animal, thus spinning the crisis into more dangerous territory under what’s known as the “spiral model.”

“When insecurity is the taproot of a state’s revisionist actions, making threats just makes the situation worse,” Walt wrote. “When the ‘spiral model’ applies, the proper response is a diplomatic process of accommodation and appeasement (yes, appeasement) to allay the insecure state’s concerns.” [See Consortiumnews.com’s “‘Realists’ Warn Against Ukraine Escalation.”]

Perhaps the new ceasefire agreement in Minsk spearheaded by German Chancellor Merkel will finally help defuse the crisis, with the legitimate concerns of the various sides being taken into account rationally rather than letting the past year’s hysteria continue to control events.

But the Times’ editorial doesn’t give much reason for hope that America’s upside-down “group think” has righted itself in any meaningful way. In the mainstream media’s latest repeat of the Iraq-WMD fiasco, the Times and virtually every other major news outlet remain committed to a dangerous misreading of the facts about Ukraine.

And anyone who dares point out the real history of the crisis is immediately shouted down with the anti-intellectual riposte: “Putin apologist!” — just as in 2002-2003, when anyone who doubted the certainty about Iraq’s WMD was a “Saddam apologist.”

54 comments for “The Putin-Did-It Conspiracy Theory”