Though founded by a pacifist who spoke for the oppressed, Christianity has contributed to more wars, injustices and genocides in all corners of the world than any other religion. But President Obama’s glancing reference to this reality prompted howls of protests, as ex-CIA analyst Paul R. Pillar notes.

President Barack Obama gave a speech last week at the National Prayer Breakfast that was instructive, reasonable, accurate and fair. It also contained messages that are all the more important to hear and heed in light of some of reactions to the speech itself.

I’m not talking about the usual reflexive Obama-bashing, which happens all the time and is not worth paying attention to. I am referring instead to reactions that indicate some more fundamental attitudinal problems that jeopardize not only U.S. foreign policy but also some core American values. 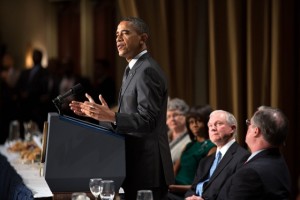 Some of the most outlandish reactions, such as former Virginia Gov. Jim Gilmore’s comment that Mr. Obama’s remarks at the event were “the most offensive I’ve ever heard a president make in my lifetime,” probably reflect these problems and are not just the familiar garden-variety partisanship.

Mr. Obama’s remarks included upbeat and informal comments about the Dalai Lama’s presence and an earlier speech by stock-car race driver Darrell Waltrip. They also included some observations, which seemed to get all the attention in the subsequent reactions, about how at different times through history different religions have been “twisted and distorted, used as a wedge,” sometimes with outrageously inhumane consequences.

But the core of the speech consisted of three main points. The first was a call for “some basic humility”, for a recognition that “the starting point of faith is some doubt,” and that we should not be so full of ourselves that we think “God speaks only to us” and “somehow we alone are in possession of the truth.”

The second point concerned the need “to uphold the distinction between our faith and our governments, between church and state.” And the third was to affirm the “Golden Rule that we should treat one another as we wish to be treated.”

It is hard to see how any American who isn’t in active denial about the benefits to mankind of the Enlightenment could disagree with any of those three points. As for the first, and the President’s preceding comments about how all religions, including Christianity, have at times been twisted for nefarious purposes, as E. J. Dionne observes, if acknowledging one’s imperfections were to be considered an insult to one’s religious faith, that would make St. Augustine a heretic.

The second is a bedrock principle of the American political system, enshrined in the U.S. Constitution. The third is at the center of any ethical system apart from rationalizations of selfishness Ã  la Ayn Rand.

In many ways, unfortunately, the United States has in its dealings with the rest of the world repeatedly flouted both the principle of humility and not assuming a monopoly of truth and the principle of treating others as we would want to be treated.

We could go on at great length on those themes, but sticking to strictly religious issues leads to a comparably disturbing observation: that American discourse and American politics have been moving ever farther from separation of faith and government, and toward having the United States take sides in favor of some religions over others. This trend manifests itself in several ways.

One way is in the prominence and power in the United States of Christianist politicians, who are every bit as worthy of that descriptor as many politicians elsewhere merit the label Islamist. Overt religiosity among American political leaders and their tendency to apply religious faith to public policy issues has waxed and waned through different phases of the Republic’s history, but the trend over the most recent decades has been upward.

A reflection of change in this regard over the past half century was the comment of Rick Santorum, a prominent example of a Christianist politician and a leading candidate for the Republican presidential nomination in 2012, that his fellow Catholic John Kennedy’s pledge to keep his religion out of the conduct of Kennedy’s presidency made Santorum “want to throw up.” The latest phase of increasing prominence of overt Christianists in American politics coincides with increasingly reflexive negative views about Islamist politicians elsewhere.

Another manifestation has been a series of more specific attacks on the establishment clause of the First Amendment, no one of which may be earthshaking but which collectively represent a substantial weakening of that foundation of American constitutionalism.

The attacks have included such things as proselytization at U.S. military academies, a Supreme Court decision (in the Hobby Lobby case) allowing one citizen’s private religious beliefs to govern the content of other citizens’ taxpayer-assisted medical care, and most recently defiance of that same Supreme Court on same-sex marriage by the chief justice of a state supreme court whose campaign to insert his religious beliefs into public affairs has included earlier defiance of a federal court order to remove a monument to the Ten Commandments that he had erected at a state courthouse.

A third indication of the trend, noticeable especially over the past decade and a half, has been increased Islamophobia, the overt rejection or distrust of an entire religion and not just of an extremist fringe. The sentiment has been pervasive in the private sector but repeatedly bleeds over into public and political space, as when Louisiana Gov. Bobby Jindal says that if American Muslims “want to set up their own culture and values, that’s not immigration, that’s really invasion.”

This entire pattern damages the effectiveness of U.S. foreign policy. It leads many foreigners to believe that U.S. actions are motivated by an objective of bashing one religion and advancing another, even if that is not their actual purpose. This belief leads to resentment and hatred of the United States and resistance against what it is trying to do.

This is why the current administration wisely eschews the term “Islamic terrorism,” notwithstanding all the baiting it gets from domestic opponents on this semantic point. It is also why the previous administration wisely backed off from calling its counterterrorist effort a “crusade,” as George W. Bush initially called it shortly after 9/11.

But such resistance and reactions to U.S. foreign policy initiatives don’t even constitute the most fundamental danger of going down the sectarian path. That danger has to do with how through the centuries religiously-defined and religiously-motivated conflict has been one of the biggest sources of organized bloodshed and human suffering.

We see such bloodshed and suffering in abundance today in the Middle East, South Asia, and parts of Africa. The West has mostly extracted itself from that type of agony, but did so only after the agony of the Thirty Years War led Europeans to erect a state system that banished to the past the idea that religious difference should be the basis for one state waging war against another state.

It would be disastrous for the United States to do anything that even hints at return to a pre-Westphalian mindset that unites sovereigns and scripture. Dionne notes that some secularists criticized President Obama’s remarks last week for having “soft-pedaled the theological roots of violence.” They have a point, but a speech at a prayer breakfast would not have been an appropriate occasion for lecturing on that broader lesson.

There are fundamental values at risk at home in the United States, too. Mr. Obama gave a nod in his speech to the Founding Fathers, and rightly so. Anyone with an interest in the Founders’ intent should pay attention to their intent regarding the importance of non-establishment of religion. George Washington said, “The United States is not a Christian nation, any more than it is a Jewish or Mohammedan nation.”

The Founders’ thinking on the subject was influenced both by the sordid history of religiously-driven conflict and by their awareness of how specific dominant religious identifications of some of the American colonies raised the risk of religious repression of those not part of the dominant sect. They saw non-establishment of religion by the state as critical to the preservation of religious freedom, one of the basic freedoms that are part of American values.

President Obama managed to hit the right notes for a prayer breakfast, speaking positively about religious faith, from the compassion of a spiritual leader such as the Dalai Lama to the role that prayer may have played for Darrell Waltrip as he was driving a race car 200 miles per hour. He also had an important message that should be heeded by anyone who makes any proposals about public policy that would involve the United States taking sides in favor of, or against, any particular religion.