The U.S. incarcerates its people at the highest rates in the world and many times what other developed nations do, including citizens who engage in non-violent protests against America’s war policies, as Kathy Kelly experienced both in her youth and now as she returned to the same aging prison in Kentucky.

But of the four federal prisons I’ve lived in, this particular “unit” may be the most conducive to mental health. Generally, the Bureau of Prisons system pushes guards to value buffed floors more than the people buffing the floors, walking the floors. Here, the atmosphere seems less uptight, albeit tinged with resigned acceptance that everyone is more or less “stuck” in what one prisoner described as “the armpit of the system.” 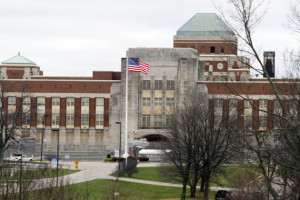 The aging federal facilities in Lexington, Kentucky, which include a prison for women. (Photo credit: Bureau of Prisons)

I think every prison throughout the system should be closed, but if it weren’t for the asbestos and concerns about toxic water, perhaps this old hall would be better than the more modern “facilities” prison architects have designed. At any rate, new prisoners arrive each week, indicating “the warehouse” is open for storing more human beings.

I thought of my younger self, this morning, while gazing out of a third floor window at fields, trees and farms outside. In 1989, when this prison was a maximum security prison for women, I spent nine months here after having planted corn on nuclear missile silo sites in Missouri. Confined to first floor environs, other prisoners and I stared at the fields and horses outside the prison through chain link fences and coiled barbed wire. Even so, we saw a beautiful spring, that year, in Kentucky. Reliably, spring will again emerge.

Slowly, I’m forming relationships now, unusual friendships that will likely grow. I’m also finding extended time to read and study. In the prison library, I found Siddhartha Mukherjee’s The Emperor of Maladies: a Biography of Cancer. When I finished reading it, I felt troubled and deeply moved.

Mukherjee, an oncologist and researcher, traces the history of cancer. His narrative includes personal stories about himself and his patients. Through their lives and struggles, he draws readers into scientific discussions of the disease itself as well as the slow and often disappointing developments of treatment and prevention.

He believes he must help his patients resist total despair. Mukherjee notes (p.397) how concentration camp survivor Primo Levi had “often remarked that among the most fatal qualities of the camp was its ability to erase the idea of a life outside and beyond itself  To be in the camps was to abnegate history, identity and personality — but it was the erasure of the future that was the most chilling.”

I’ve heard prison described as “hard time.” It’s a phrase given strange and tragic resonance by the walling off of these women’s futures. Shortly before I arrived here, a woman on my floor had removed all her photos from her bulletin board, convinced that she would soon be among a few inmates recently granted immediate release because of retroactive changes in sentencing laws for drug related charges.

“I’m not going to get immediate release,” she sadly told me. When she finished recomposing the board, she told me about each photo. Like pieces of a puzzle, the stories helped form her life story, full of human desire to love and be loved. She’ll likely be here for 33 more months, having already been “down” for 17 months. The cherished photos and memories, the painful fact of their own love for the world outside, helps pull women through hellish feelings of utter isolation and despair.

Our society barely recognizes the futility of imprisoning people for onerously long sentences. I think of Mukherjee and wonder whether U.S. people invested as much money in cancer research as they did in Super Bowl celebrations this year.

“We must rapidly begin the shift from a thing-oriented society to a person-oriented society,” said Dr. King, and it’s a shift that in many ways we’ve yet to make. He called for a rapid shift, and said, “We are at the moment when our lives must be placed on the line if our nation is to survive its own folly.”

And yet a foolish over-concern for our own safety, as well as for “profit motives and property rights,” locks these women away and bombs the poor in distant countries, and barely notices what it has done. So much is spent on entertainment, so little to abolish punishing inequality, or the cancer of war.

Abolitionists like King urged humans to abandon the cruel futility of war and to shut down the development, sale, storage and use of weapons: “A nation that continues, year after year, to spend more money on military defense than on programs of social uplift is approaching spiritual death.”

I’m fortunate, here in prison, to revisit through memories my young friends in Afghanistan embracing King, in Rabbi Abraham Heschel’s words, as “a voice, a vision, and a way.” They are working full tilt at plans for expanding an alternative school for street kids, and at supplying their poorest neighbors with blankets and local seamstresses with work, and they’re working to cultivate soil as well as imagination, striving for a border-free world. They help one another overcome desires for revenge, they show a light of human dignity that has at times transformed, and never wholly failed to illuminate, even the darkest times.

A few nights ago, at dinner, a fellow inmate here remarked that the food was bland and overcooked. Then she turned to me, her eyes suddenly having filled with tears. “Some of the people you met in Afghanistan,” she said, “might call this a feast.”

If the liberating day ever arrives when Dr. Martin Luther King’s goals are realized, spirits coursing through Atwood Hall will have contributed toward our collective release from the vise-like grip of “militarism, racism and economic exploitation.”

Every day, here in Atwood Hall, prisoners long to receive fairness, forgiveness and love but instead offer these treasures to those around them. The other day, at a choir rehearsal, we practiced a song called “Breaking the Chains.” The lively refrain, “I hear the chains falling,” filled the small chapel. Swaying and clapping, we could believe another world is coming.

I’m learning from my fellow prisoners, who will remain here long past my meager three months’ sentence. Our society may or may not learn, from any commitment we show now, to free its prisoners. If we turn to each other with a readiness to share resources, live simply and practice fairness, perhaps it will find a way to end cruelties as wrongheaded as this prison system.

Meanwhile the shift we make in our own lives might help give us and our suffering neighbors the saving vision beyond our present moment, and light to see a shared future through isolation and darkness. A moment can become a movement but in any case it’s worthwhile to do all we can to help each other do easier time.