Exclusive: The criminal case against ex-CIA analyst Ray McGovern for “resisting arrest” when he was denied entry to a public speech by retired Gen. David Petraeus appears to be nearly over, but the image of police brutally shielding the mighty from a citizen’s question remains troubling, writes Robert Parry.

What if Martin Luther King Jr. had been arrested in Birmingham, Alabama, in April 1963 and the U.S. news media had decided that it wasn’t a story, just some troublemaker getting what he deserved for breaking the law? Would King have gone on to give his “I have a dream speech” in August, win the Nobel Peace Prize in 1964 and change American history?

Some Americans would insist that suppressing news about King’s arrest during the Birmingham protests simply couldn’t happen here because we have a free press that for all its faults knows a good story when it sees one. 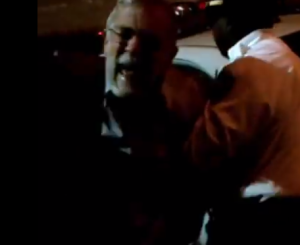 Ex-CIA analyst Ray McGovern crying out in pain while being arrested on Oct. 30, 2014, in New York City. (A screenshot from a YouTube video via The Dissenter at firedoglake.com)

Sure, these people might acknowledge that there may have been a time before airplanes and television when significant events in fairly remote parts of the country were missed because they were harder to get to or because editors might not even have been aware of a newsworthy story, but not in 1963 and surely not today, in the Internet age when there’s Facebook and Twitter, which news organizations monitor regularly.

So, what if I told you that an internationally known American a 75-year-old Army veteran and a longtime official at the Central Intelligence Agency, someone who had famously questioned the imperious Defense Secretary Donald Rumsfeld about his Iraq War lies in a public event that led evening newscasts in 2006 was recently denied entry to a public speech by another Iraq War icon, Gen. David Petraeus, and despite having paid for a ticket was brutally arrested by the police and jailed?

But what if I told you that the New York Times wasn’t interested at all? You might think that perhaps the event occurred in some distant hamlet, maybe a small college town where there wasn’t much media, so it just fell through the cracks.

Yet, this story actually played out in New York City, the media capital of the world, on the Upper East Side at the 92nd Street Y in full view of hundreds of New Yorkers on the night of Oct. 30, 2014. Former CIA analyst Ray McGovern was roughly arrested, with the police ignoring his howls of pain as they pulled his arms behind his back. (McGovern had recently suffered a painful shoulder injury from a fall.}

The arrest of McGovern on charges of resisting arrest, criminal trespass and disorderly conduct did draw attention from people on Facebook and Twitter. It was described in some detail at reasonably well-read Internet sites, including Consortiumnews.com. The story resonated around the world, even reaching RT, the Moscow-based network.

Yet, it was studiously ignored by nearly all the New York media. When I ran a Google search for “Ray McGovern, Petraeus, arrest,” there were scores of articles from various Web sites but next to nothing from the mainstream media. Only one brief item came up from the New York Daily News with a misleading headline saying McGovern was “trying to crash” the Petraeus speech (although the article did note that McGovern had bought a $45 ticket).

McGovern, who has become a prominent critic of recent U.S. war policies (and who writes frequently for Consortiumnews.com), called me the day before the event and said he planned to attend Petraeus’s speech with hopes that he might be able to ask a question from the audience, like he had in challenging Rumsfeld.

But someone in authority apparently got wind of McGovern’s plan he still is curious how that happened and he was intercepted when he arrived at the 92nd Street Y. A security guard addressed him by name, “Ray, you’re not welcome here” and the NYPD was prepositioned to arrest him.

As the police pinned his arms behind him wrenching his injured shoulder McGovern screamed in pain as bystanders unsuccessfully implored the police not to behave so brutally. The arrest was captured on an amateur video (uploaded to YouTube by April Watters). It is not pleasant to watch.

Probably some Americans feel that McGovern got what he deserved for even thinking about posing a pointed question to a “hero” like retired Gen. Petraeus, who was speaking along with one of his neocon friends, Council on Foreign Affairs honcho Max Boot, who, like Petraeus, had been all gung-ho for the Iraq War.

Having briefed senior U.S. government officials for years while at the CIA, McGovern is not intimidated by some growling response from a powerful man. Nor is he scared of getting booed by an audience enthrall to a famous speaker.

So, in that sense, McGovern might well have “disrupted” the event with an impertinent question, possibly about how the Iraqi Army that Petraeus has boasted about training so well collapsed in the face of ragtag militants from the Islamic State in 2014.

That might have caused an uncomfortable moment or two, but isn’t that what democracy and freedom of speech are all about, the ability for a citizen to question the mighty? And, really, is it the job of police in a “free society” to roughly arrest a citizen who objects to being denied entry to a public event because of his perceived political opinions — and to prevent the citizen from having the chance to ask a question?

Though he lives in Arlington, Virginia, McGovern had to return to New York for a court appearance on Feb. 4. There, the judge granted what’s called an “adjournment in contemplation of dismissal,” meaning that the charges will go away if McGovern doesn’t commit any new offenses. Advised by his pro bono attorney, Moira Meltzer-Cohen, McGovern accepted the offer, rather than extend the legal fight over what appeared to be a First Amendment issue.

But perhaps what should alarm Americans the most is that the New York Times and other major media in New York City see nothing newsworthy about a citizen being silenced, roughed up and arrested for simply hoping to ask the esteemed David Petraeus a question.

[For more on this topic, see Consortiumnews.com’s “Petraeus Spared Ray McGovern’s Question”, “Stifling Dissent on the Upper East Side,” and McGovern’s “A Pointed Letter to Gen. Petraeus.”]

← A Rush to Judgment in Argentine Bomb Case?
WPost Is Lost in Neocon Fantasyland →