Exclusive: New York City police arrested ex-CIA analyst Ray McGovern to prevent him from attending a public event where he planned to pose a pointed question to retired Gen. David Petraeus, another sign of how much U.S. neocons love democracy, writes Robert Parry.

Former CIA analyst Ray McGovern, who was arrested by New York City police on Thursday night to prevent him from attending a speech by retired Gen. and ex-CIA Director David Petraeus, told me the day before that he was planning to ask a question during the Q-and-A.

McGovern, who writes regularly for Consortiumnews.com, compared his goal in New York to his famous questioning of then-Defense Secretary Donald Rumsfeld in Atlanta in 2006 when McGovern pressed Rumsfeld on false statements he had made about Iraq’s WMD and ties to al-Qaeda. 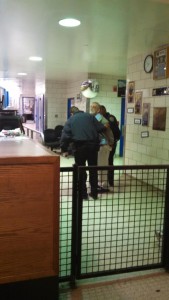 But the 75-year-old McGovern was blocked from entering the event at the 92nd Street Y, was roughly put under arrest, and was held overnight in jail. He described his ordeal in an interview with RT, saying “I was warned as soon as I got to the ticket-taker, ‘Ray, you’re not welcome here.’”

McGovern, who was suffering from a shoulder injury, said he was caused sharp pain by being forcefully handcuffed. “If you’ve seen the footage, you can see me screaming in pain as they try to pin my left wrist around behind my back,” McGovern told RT.

He was hauled off to a local precinct and charged with resisting arrest, criminal trespass and disorderly conduct. He said he spent the night on a stainless steel cot.

In our conversation a day earlier, on Wednesday, McGovern said he was calling from the bus traveling between Washington and New York en route to speak at his alma mater, Fordham University. But he said he also planned to attend the Thursday speech by Petraeus, who was one of President George W. Bush’s favorite generals during the Iraq War. McGovern noted that prominent neocon theorist Max Boot was moderating the Petraeus talk.

During the Iraq War under President Bush and the Afghan War under President Barack Obama, Petraeus collaborated closely with leading neoconservatives as they pushed for escalations of the two conflicts. In 2009, Petraeus was part of a successful behind-the-scenes effort by Bush holdovers to trap Obama into a “surge” of 30,000 troops into Afghanistan.

“Before Obama’s decision to dispatch 30,000 troops, the Bush holdovers sought to hem in the President’s choices by working with allies in the Washington news media and in think tanks,” I wrote in 2010. “For instance, early in 2009, Petraeus personally arranged for Max Boot [a neocon on the Council on Foreign Relations], Frederick Kagan and Kimberly Kagan [two other leading neocons] to get extraordinary access during a trip to Afghanistan.

“Their access paid dividends for Petraeus when they penned a glowing report in the Weekly Standard about the prospects for success in Afghanistan if only President Obama sent more troops and committed the United States to stay in the war for the long haul.”

Upon their return, the three wrote: “Fears of impending disaster are hard to sustain, if you actually spend some time in Afghanistan, as we did recently at the invitation of General David Petraeus, chief of U.S. Central Command.

“Using helicopters, fixed-wing aircraft, and bone-jarring armored vehicles, we spent eight days traveling from the snow-capped peaks of Kunar province near the border with Pakistan in the east to the wind-blown deserts of Farah province in the west near the border with Iran. Along the way we talked with countless coalition soldiers, ranging from privates to a four-star general,” the trio said.

How Obama was manipulated into the Afghan “surge” by Bush’s holdovers with the help of the neocons was chronicled, too, in Bob Woodward’s 2010 book, Obama’s Wars, which revealed that Bush’s old team made sure Obama was given no option other than to escalate troop levels in Afghanistan. The Bush holdovers also lobbied inside neocon-friendly media for the troop increase behind Obama’s back.

Woodward’s book notes that “in September 2009, Petraeus called a Washington Post columnist to say that the war would be unsuccessful if the president held back on troops. Later that month, [Joint Chiefs of Staff Chairman, Adm. Mike] Mullen repeated much the same sentiment in Senate testimony, and in October, [Gen. Stanley] McChrystal asserted in a speech in London that a scaled-back effort against Afghan terrorists would not work.”

This back-door campaign infuriated Obama’s aides, including White House chief of staff Rahm Emanuel, Woodward reported. “Filling his rant with expletives, Emanuel said, ‘Between the chairman [Mullen] and Petraeus, everyone’s come out and publicly endorsed the notion of more troops. The president hasn’t even had a chance!’” Woodward reported.

Mouse-trapped by this clever maneuvering, Obama acquiesced to the 30,000-troop “surge” although he reportedly regretted his decision almost immediately. In the end the “surge” and Petraeus’s counterinsurgency strategy that went with it had little impact on the Afghan War beyond extending the carnage and adding another 1,000 or so U.S. troops to the rolls of “the fallen.”

Petraeus’s cozy relationship with Boot was also underscored in 2010 when the four-star general accidentally found himself in a public-relations kerfuffle because some of his prepared testimony to Congress had contained a mild criticism of Israel.

Concerned that his standing in Official Washington might be jeopardized if he were deemed “anti-Israel,” Petraeus begged Boot to help him head off the controversy. The e-mails from Petraeus to Boot revealed Petraeus renouncing his own testimony in March 2010 because it included the observation that “the enduring hostilities between Israel and some of its neighbors present distinct challenges to our ability to advance our interests” in the Mideast.

Petraeus’s testimony had continued, “Israeli-Palestinian tensions often flare into violence and large-scale armed confrontations. The conflict foments anti-American sentiment, due to a perception of U.S. favoritism for Israel. Meanwhile, al-Qaeda and other militant groups exploit that anger to mobilize support.”

Though the testimony was obviously true, many neocons regard any suggestion that Israeli intransigence on Palestinian peace talks contributed to the dangers faced by American soldiers in Iraq and Afghanistan or by the U.S. public from acts of terrorism at home as a “blood libel” against Israel.

So, when Petraeus’s testimony began getting traction on the Internet, the general turned to Boot at the high-powered Council on Foreign Relations, and began backtracking on the testimony. “As you know, I didn’t say that,” Petraeus said, according to one e-mail to Boot timed off at 2:27 p.m., March 18, 2010. “It’s in a written submission for the record.”

In other words, Petraeus was saying the comments were only in his formal testimony submitted to the Senate Armed Services Committee and were not repeated by him in his brief oral opening statement. However, written testimony is treated as part of the official record at congressional hearings with no meaningful distinction from oral testimony.

In another e-mail, as Petraeus solicited Boot’s help in tamping down any controversy over the Israeli remarks, the general ended the message with a military “Roger” and a sideways happy face, made from a colon, a dash and a closed parenthesis, “:-)”.

The e-mails were made public by James Morris, who runs a Web site called “Neocon Zionist Threat to America.” He said he apparently got them by accident when he sent a March 19 e-mail congratulating Petraeus for his testimony and Petraeus responded by forwarding one of Boot’s blog posts that knocked down the story of the general’s implicit criticism of Israel.

Petraeus forwarded Boot’s blog item, entitled “A Lie: David Petraeus, Anti-Israel,” which had been posted at the Commentary magazine site at 3:11 p.m. on March 18. However, Petraeus apparently forgot to delete some of the other exchanges between him and Boot at the bottom of the e-mail.

McGovern was aware of this history and told me that he thought an opportunity to question Petraeus in such a setting with Boot might prove illuminating. After his arrest and release, McGovern told RT that he had planned to ask Petraeus, who was responsible for training the Iraqi army, about his failure to train those forces sufficiently to stand up to a recent offensive by the Islamic State.

“Will you come out of retirement and try to do it better this time to train the Iraqi forces?” McGovern said, describing his intended question.

Petraeus retired from the U.S. Army in 2011 to become the director of the Central Intelligence Agency, which he left in disgrace in November 2012 after revelations that he had an extramarital affair with an admiring female biographer.

“This is no saint. This is actually no great strategist,” McGovern said of Petraeus. “He’s an embarrassment to the U.S. Army in which I used to be proud to have served.”