The CIA doesn’t like to be portrayed as the gang that couldn’t shoot straight, so it has been using the leak trial of ex-CIA officer Jeffrey Sterling to insist that it really can shoot straight and indeed is brilliantly protecting America’s national security, writes Norman Solomon.

Six days of testimony at the trial of former CIA officer Jeffrey Sterling have proven the agency’s obsession with proclaiming its competence. Many of the two-dozen witnesses from the Central Intelligence Agency conveyed smoldering resentment that a whistleblower or journalist might depict the institution as a bungling outfit unworthy of its middle name.

Some witnesses seemed to put Sterling and journalist James Risen roughly in the same nefarious category, Sterling for allegedly leaking classified information that put the CIA in a bad light, and Risen for reporting it. Muffled CIA anger was audible, coming from the witness stand, a seat filled by people claiming to view any aspersions on the CIA to be baseless calumnies. 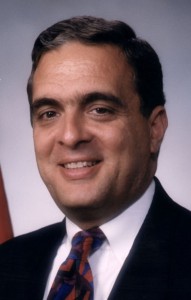 George Tenet, who was CIA director at the time of Operation Merlin.

Other than court employees, attorneys and jurors, only a few people sat through virtually the entire trial. As one of them, I can say that the transcript of USA v. Jeffrey Alexander Sterling should be mined for countless slick and clumsy maneuvers by government witnesses to obscure an emerging picture of CIA recklessness, dishonesty and ineptitude.

Consider, for example, the testimony of David Shedd, who was chief of operations for the CIA’s Counterproliferation Division when Sterling was a case officer at the turn of the century. On the stand, Shedd presented himself as superbly savvy about Operation Merlin. He’d met with the head prosecutor three times to prepare for testifying. Yet, as a witness, Shedd turned out to be stunningly ignorant about the only CIA operation at issue in the trial.

Like other CIA witnesses, Shedd testified in no uncertain terms that Operation Merlin, executed to give a flawed nuclear weapon design to the Iranian government, was expertly planned and then well implemented in 2000. But his testimony included a key statement that was a fundamentally incorrect version of what happened.

In reality, as Risen reported in his book State of War, and as all other accounts affirmed in the courtroom, the Russian scientist working for the CIA carried the nuclear diagram to Vienna, and left it in a mailbox at the Iranian mission office without ever speaking with anyone there. But Shedd flatly testified that the scientist had met with someone in Iran when delivering the diagram.

Shedd’s authoritative demeanor about Operation Merlin was matched by the incongruous immensity of his error. He had preened himself on the stand as someone who had been the ultra-adept overseer of Operation Merlin, as the direct supervisor of the man (“Bob S,” who testified behind a screen) in charge of that CIA program, touted in court as one of the most vitally important in the agency’s modern era.

As much as anything else, the CIA witnesses at the trial seemed offended by Risen’s characterization of Operation Merlin as ill-conceived, poorly executed and reckless. Along with the usual abhorrence of classified leaks (at least the ones unapproved by the agency’s leaders), the testifying CIA officials and case officers were in firm denial that the Merlin operation was screwed up. I got the impression that most would much rather be considered ruthless or even cruel than incompetent.

The subject of competence is a sore spot for career CIA employees proud of their hard-boiled affects. From their vantage points, it can’t be expunged by dismissing critics as impractical idealists and bleeding hearts merely concerned with the morality of drones, torture or renditions.

Jeffrey Sterling has continued to deny the charges that he was a source for Risen’s book. But no one disputes that Sterling went through channels in 2003 to alert the Senate Intelligence Committee staff to his concerns about Operation Merlin.

The first full day of jury deliberations in this historic leak trial is set for Friday. If Sterling goes to prison, a major reason will be that the CIA leadership is angry about being portrayed as an intelligence gang that can’t shoot straight. The government cannot imprison Risen the journalist, but it may be on the verge of imprisoning Sterling the whistleblower.

Based on the evidence, it would be delusional to think of the CIA as a place run by straight shooters.