President Obama struck a folksy tone during his State of the Union address, but there wasn’t much substance for the average folks and even his fairly modest proposals for helping the middle class face determined GOP opposition as Michael Winship describes.

Much of the buildup to President Barack Obama’s State of the Union address made it sound as if he was going to read chapter and verse from French economist Thomas Piketty’s book, Capital in the 21st Century  you know, last year’s 700-plus page best seller, the one that was unexpectedly all the rage as it argued that vast economic inequality is as much about wealth (what’s owned) as it is about income (what’s earned). That one.

Matt Schiavenza explained it in The Atlantic, “Applying data gathered across several decades throughout the world, Piketty argued that when income derived from capital exceeds income derived from work, inequality necessarily widens. Or, in non-economics speak: The easiest way to get rich isn’t to make a lot of money. It’s to have a lot of assets in the first place. Better yet to inherit it.” 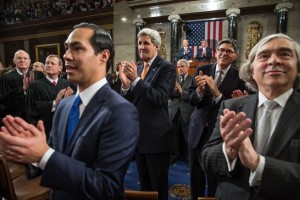 Not that anyone really expected the President to address Congress like a tutorial in global economics, but the Piketty meme took hold in a lot of the media. “Echoes of Piketty in Obama Proposal to Address Income Inequality” read a headline in The New York Times previewing the address just hours before it was delivered.

The Washington Post’s Wonkblog predicted, “President Obama finally has his Piketty moment.” The paper’s Matt O’Brien wrote, “The state of the union is pretty good, actually, but President Obama has an idea to make it better: taxing Wall Street and the super-rich to make middle-class work even more worthwhile. It’s Piketty with an American accent.”

In fact, the president appeared to have lost his nerve. He used the word “inequality” only once in his entire, hour-long speech: “Let’s close the loopholes that lead to inequality by allowing the top one percent to avoid paying taxes on their accumulated wealth,” he said. “We can use that money to help more families pay for childcare and send their kids to college. We need a tax code that truly helps working Americans trying to get a leg up in the new economy, and we can achieve that together.”

Beyond the well-delivered, folksy rhetoric, here’s what the President’s budget apparently will propose. In Matt O’Brien’s words: “$320 billion of new taxes on rentiers, their heirs, and the big banks to pay for $175 billion of tax credits that will reward work. In other words, it’s fighting a two-front war against a Piketty-style oligarchy where today’s hedge funders beget tomorrow’s trust funders.” (Rentiers, by the way, are people who make their money off property, investments or inherited wealth.)

More specifically, Julie Pace at Associated Press reports: “The president’s proposal would increase the capital gains rate on couples making more than $500,000 annually to 28 percent [currently, it’s 23.8 percent], require estates to pay capital gains taxes on securities at the time they’re inherited, and slap a fee on the roughly 100 U.S. financial firms with assets of more than $50 billion.

“Administration officials said much of the $320 billion in new taxes and fees would be used for measures aimed at helping the middle class, including a $500 tax credit for some families with two spouses working and a $60 billion program to make community college free.”

This is, as several commentators have described it, “Piketty-lite,” a start, but not enough to get the job done for a middle class clobbered by technology and globalization.

“Dollar-store progressivism,” Jordan Weissman calls it at Slate. “ Big ideas with relatively small price tags.” That $320 billion is spread out over a decade, or $32 billion per year: “That’s just a smidge more than 1 percent of last year’s federal tax revenue, more than a rounding error, but not much more. Obama isn’t looking to soak the rich at this point so much as lightly spritz them.”

Ah, yes: On just about everything to do with Big Money, Mr. Obama is spritzer-in-chief, not the reformer-in-chief.  And that’s because, occasional oratory to the contrary, he is tucked well under the corporate wing of his party, mightily beholden to the investment sector he occasionally decries to maintain his credibility. Remember that within beats of defending the middle class in the State of the Union. he was calling for the fast tracking of new trade agreements that will make the rich richer but also could help destroy what little is left of American manufacturing and the jobs that go with it.

What’s more, President Obama was addressing a body of legislators that as of 2013 was worth roughly $4.3 billion, each with a median net worth of slightly more than a million dollars, the combined wealth of more than 18 typical American households, according to the Center for Responsive Politics.

As the center’s executive director Sheila Krumholz drily observed, “Struggling Americans should not assume that their elected officials understand their circumstances.”

Author and scholar Laurie Garrett tweeted that as the President spoke, “a record number of private jets landed” at the Davos World Economic Forum, the Super Bowl of the super-rich, the people who have come through the recession, brought on by Wall Street greed, in better shape than ever, thank you.

And the President’s words came on the heels of a new report from Oxfam that the world’s wealthiest one percent are on the verge of owning more than every other person on the planet combined. Group hug, everyone!

So count on it: With a President too often bold in words but timid in action facing a Congress more Republican and obstructionist than ever, little will get done to fix inequality. Even the Tea Partiers who howled in protest over the bailout of the big banks back in 2008 have been taken to the woodshed by the likes of Karl Rove, and are silent as establishment Republicans complete the return of the GOP as Guardians of the One Percent.

For now, don’t really expect further taxes on the wealthy that could help those at the bottom (and did you hear any discussion of America’s poor people at the State of the Union?) Funny how trickle-down economics, a concept beloved by the GOP and its plutocratic allies, as well as by corporate Democrats, become an abomination when the galoshes are on the other foot and favor the less well off. Suddenly, trickle-down becomes all wet.

← Jesus as Whistleblower
CIA Wants Its Reputation Back →