Facing Republican/neocon pressure, President Obama balked at a final deal with Iran over its nuclear program, extending talks but increasing chances that political forces in Iran might repudiate more moderate leaders favoring a deal, a risk that ex-CIA analyst Paul R. Pillar says would not serve U.S. or Iranian interests.

The single most important fact about the extension of the nuclear negotiations with Iran is that the obligations established by the Joint Plan of Action negotiated a year ago will remain in effect as negotiations continue.

This means that our side will continue to enjoy what these negotiations are supposed to be about: preclusion of any Iranian nuclear weapon, through the combination of tight restrictions on Iran’s nuclear program and intrusive monitoring to ensure the program stays peaceful. 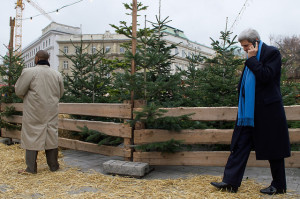 Our side, the United States and its partners in the P5+1, got by far the better side of the deal in the JPOA. We got the fundamental bomb-preventing restrictions (including most significantly a complete elimination of medium-level uranium enrichment) and enhanced inspections we sought, in return for only minor sanctions relief to Iran that leaves all the major banking and oil sanctions in place. If negotiations were to go on forever under these terms, we would have no cause to complain to the Iranians.

But the Iranians do not have comparable reason to be happy about this week’s development. The arrangement announced in Vienna is bound to be a tough sell back in Tehran for President Rouhani and Foreign Minister Zarif. The sanctions continue, and continue to hurt, even though the Iranian negotiators have conceded most of what they could concede regarding restrictions on the nuclear program.

There will be a lot of talk in Tehran about how the West is stringing them along, probably with the intent of undermining the regime and not just determining its nuclear policies.

That the Iranian decision-makers have put themselves in this position is an indication of the seriousness with which they are committed to these negotiations. This week’s extension is of little use to them except to keep alive the prospect that a final deal will be completed.

Also indicating their seriousness is the diligence with which Iran has complied with its obligations under the JPOA. The International Atomic Energy Agency confirmed today Iran’s compliance with its final pre-November 24th obligation, which had to do with reducing its stock of low-enriched uranium in gaseous form.

Because the P5+1 got much the better side of the preliminary agreement, the P5+1 will have to make more of the remaining concessions to complete a final agreement. The main hazard to concluding a final deal is not an Iranian unwillingness to make concessions. The main hazard is a possible Iranian conclusion that it does not have an interlocutor on the U.S. side that is bargaining in good faith.

We push the Iranians closer to such a conclusion the more talk there is in Washington about imposing additional pressure and additional sanctions, as people such as Marco Rubio and AIPAC have wasted no time in doing in response to today’s announcement about the extension of negotiations.

We have sanctioned the dickens out of Iran for years and are continuing to do so, but the only time all this pressure got any results is when we started to negotiate in good faith. Surly sanctions talk on Capitol Hill only strengthens Iranian doubts about whether the U.S. administration will be able to deliver on its side of a final agreement, making it less, not more, likely the Iranians would offer still more concessions.

Any actual sanctions legislation would blatantly violate the terms of the JPOA and give the Iranians good reason to walk away from the whole business, marking the end of any special restrictions on their nuclear program.

And besides, the sanctions hurt us economically too. To get a final agreement does not mean fixating on the details of plumbing in enrichment cascades, which do not affect our security anyway. It means realizing what kind of deal we got with the preliminary agreement, and negotiating in good faith to get the final agreement.

5 comments for “The Risks of No Iran-Nuke Deal”