Exclusive: At the start of Barack Obama’s second term, Defense Secretary Chuck Hagel was seen as the best hope for standing up to the neocons, inside and outside the administration. Though Hagel proved to be a weak champion, his sudden removal could portend more trouble ahead, writes Robert Parry.

The abrupt resignation of Defense Secretary Chuck Hagel along with the failure to reach a final agreement on Iran’s nuclear program on the same day does not augur well for the last quarter of Barack Obama’s presidency, reflecting his continuing tendency to let the neocons have their way.

Not that Hagel had distinguished himself as a sterling leader of the Pentagon nor has all hope disappeared that a sensible resolution of the impasse with Iran might be achieved before the next “deadline” in June but Obama still does not appear to have escaped the spell of the neocons who continue to dominate American geopolitical thought despite the bloody disasters that they helped cause in Iraq, Afghanistan and elsewhere. 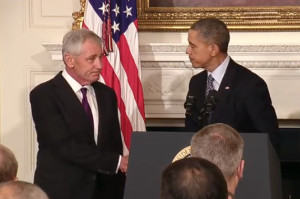 Defense Secretary Chuck Hagel shakes hands with President Barack Obama at the White House on Nov. 24, 2014, as the President announces that Hagel is resigning. (U.S..government photo)

Six years into his presidency, Obama still doesn’t seem to understand that just because some people have impressive credentials doesn’t mean they know what they’re doing. Indeed, in a profoundly corrupted system like the one that now controls Official Washington rewards are handed out to people who serve the corrupt interests or at least don’t get in the way.

In a time of corruption, the countervailing forces of wisdom and courage will never be found among the credentialed, but rather among the outcasts of the establishment, those who were forced to the margins because they objected to the venality, because they stood up against misguided “group think.”

But Obama has been unwilling or possibly unable to come to grips with this reality. Despite his personal intelligence and rhetorical skills, Obama never has been willing to challenge people cloaked in credentials those who went to the best schools, worked at big-name firms, won prestigious awards or held fellowships at famous think tanks.

The tragedy of Obama is that I’m told that he understands the stupidity of the modern U.S. establishment and does sometimes consult with “realists” who offer practical advice for how he can resolve some of the most nettlesome problems facing the United States around the world. But he does so virtually in secret, with what politicians like to call “deniability.”

Obama operates one foreign policy above the table pounding his fist along with the neocons against Syria, Iran and Russia and another foreign policy below the table, dealing with adversaries in ways necessary to confront global challenges, such as collaborating with Iran to counter the Islamic State in Iraq and Syria and with Russia to address challenges with Iran, Syria, Libya and elsewhere.

Yet, while keeping such pragmatic overtures under the table, Obama reaches out publicly to neocons who have been implicated in some of the worst disasters in the history of U.S. foreign policy — but who have “credentials.” For instance, earlier this year, Obama was stung by criticism from neocon ideologue Robert Kagan, who had published a long essay in The New Republic promoting the need for more U.S. interventionism around the world.

Obama could have dismissed Kagan’s New Republic article as the pretentious pontifications of a blowhard whose career began as a propagandist for Ronald Reagan’s Central American policies in the 1980s and included, in the 1990s, co-founding the Project for the New American Century, which called for invading Iraq, an illegal war that was launched in 2003, propelling America into the current catastrophes now swirling around the Middle East.

But Obama apparently couldn’t get past all of Kagan’s “credentials,” including his current work at the prestigious Brookings Institution and his writing for the oh-so-impressive New Republic. So, Obama invited Kagan to lunch at the White House, a cozy get-together that one observer described as a “meeting of equals.”

Yes, the twice-elected President of the United States and his “equal,” one of the co-founders of the neocon Project for the New American Century. The New York Times reported that Obama even shaped his foreign policy speech at the West Point graduation in May to address criticism from Kagan’s New Republic essay, “Superpowers Don’t Get to Retire.”

Off to The Hague

You might think that the only reason to invite one of the Iraq War architects to the White House would be as a “sting operation” to arrest him and trundle him off to The Hague for prosecution for war crimes. After all, the justices at the post-World War II Nuremberg Tribunals deemed aggression starting an unprovoked war “the supreme international crime differing only from other war crimes in that it contains within itself the accumulated evil of the whole.” And we have certainly seen that “accumulated evil” get unpacked.

Yet, Obama courted Kagan as a respected “equal,” according to one source familiar with the behavior of the two men at lunch. Although as a journalist I try not to react viscerally to what I hear, the phrase “a meeting of equals” brought the taste of vomit to the back of my throat.

I couldn’t help but recall the reported outburst by President Abraham Lincoln after his reelection as he struggled to secure the necessary votes for passing the Thirteenth Amendment to abolish slavery: “I am the President of the United States, clothed with immense power, and I expect you to procure those votes” (as recounted years later by Congressman James Alley).

However, after also winning the presidency a second time, President Obama couldn’t seem to find his inner Lincoln.

In trying to understand what makes Obama tick, I have often been struck by how he seems awed by credentials, perhaps because credentials were the key to his unlikely rise from an obscure and exotic background to edit the Harvard Law Review, to build an academic career, to gain a U.S. Senate seat, and to win the presidency of the United States. Along the way, he got “blessed” by many of the “right” people and never strayed too far from the safety of the “establishment.”

Even as a twice-elected president, Obama seems captive to this high regard for people with credentials, even when the system awarding those credentials daily demonstrates its extraordinary levels of corruption, cruelty and outright stupidity.

Which brings us back to the apparently forced resignation of Chuck Hagel, who earned the enmity of Official Washington because he was an early Republican turning against the Iraq War and because he offered some mild criticism of the Israel Lobby.

On the surface, Obama’s abandonment of Hagel while retaining the bombastic neocon-approved Secretary of State John Kerry and other war hawks like U.S. Ambassador to the United Nations Samantha Power and Assistant Secretary of State for European Affairs Victoria Nuland (Kagan’s wife) suggests that Obama may be again bending his foreign policy in directions favored by the neocons and their sidekicks, the “liberal interventionists.”

That could presage further disasters if Obama adopts the neocon strategy of ratcheting up tensions with Iran over its nuclear program and bombing the Syrian military in a move to overthrow President Bashar al-Assad with both “regime change” goals high on the agenda of Israel’s right-wing government.

Yet, since Iran has been playing a key role in taking on the Islamic State militants in both Iraq and Syria and since Assad’s army is the only force capable of holding back Islamic extremists inside Syria the neocon “regime change” plan is reckless in the extreme. A very possible result from such a U.S. intervention against Assad would be a military victory for Al-Qaeda’s Nusra Front or the even more extreme Islamic State.

There’s also the neocon desire for a new Cold War with Russia over Ukraine. It’s possible that Hagel, a Vietnam veteran who understands the ugliness of war and has no fondness for the neocons, is being sidelined because he isn’t willing to throw more young American men and women into the blood and horror of more neocon-inspired adventures, not to mention wasting hundreds of billions of dollars in taxpayers’ money.

But Hagel’s erratic performance as Defense Secretary often coming across as inarticulate and imprecise could represent a less consequential reason for the change at the Pentagon. Perhaps, Obama simply wants someone who is more skilled at the job.

[For more on the neocons and U.S. foreign policy, see Consortiumnews.com’s “Delusional US ‘Group Think’ on Syria and Ukaine.”]

← The Risks of No Iran-Nuke Deal
In Case You Missed… →