The issue of gay marriage appears headed back to the U.S. Supreme Court where the justices may finally decide if states can bar gay couples from marrying or not. Currently, 33 states and the District of Columbia recognize gay marriage, including Alaska where Rev. Howard Bess lives.

The phone rang. “This is Ray Briggs. Do you remember me?” The name was familiar, but I could not come up with a face with the name. I had not seen Ray for almost 20 years. However, with a little prompting, I recalled exactly who Ray was. 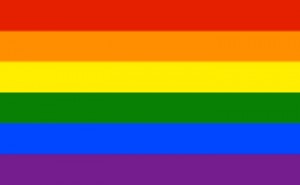 Rainbow flag of the gay-rights movement

In earlier ceremonies, I avoided using the word “marriage.” I was willing to leave that word in the hands of the state. I always used the term “holy union.” At last, I am free legally to use the appropriate word, “marriage.”

The story of Ray and Gil follows a pattern that has come to be very familiar to me. Each knew he was gay from early childhood, but it was a closely guarded secret. Both came from religious backgrounds. Ray tried desperately to be someone that he was not. He joined the U.S. Army when he was 17 and served in the Vietnam/Cambodia theatre.

Under social and family pressure, Ray married an unsuspecting woman. He fathered six children, but the marriage did not work. His wife divorced him and took the children. Honorable military service, marriage and fathering children with a woman did not change Ray. He was still a gay man.

Ray met Gil, a shy young man ten years younger than Ray. They soon moved in together and have been together in a faithful, monogamous relationship for 39 years. Ray has maintained a relationship with his children, and one of his grandsons is planning to be his grandfather’s best man. Ray and Gil left churches long ago.

The story of Ray and Gil is one that has repeated itself over and over again in my career as a Baptist minister and advocate of full acceptance of gay and lesbian people. I could write a long book about the gay couples that I have known and still know here in Alaska’s Matanuska Valley. They live in committed relationships, parent children and lead responsible lives.

The legal recognition of gay marriages is a great milestone in the process of gaining full acceptance of gay persons in our society, but we still have a long way to go. In the Valley, gay families are still largely hidden. Gay couples and their children are fearful of social ostracism and physical abuse. Their fears are not unfounded.

Jesus and the Expendables

We are learning more and more about the social and political structures of the days of Jesus of Nazareth. In Jesus’s time and place a desperately poor region then dominated by rich absentee landowners and governed by the Roman Empire there was a large population of peasant farm workers barely existing.

Below the peasants at the bottom of the social and economic ladder were the expendables. Every era has its expendables. They are people who are deemed to be without value, people whom much of society believes are worthless. It is getting more and more apparent to New Testament scholars that expendables were a high priority to Jesus.

Who are the current expendables of our society? They have many faces, but in my career as a Baptist minister, I found “expendables” in abundance in three places. I found them in jails. I found them suffering from long-term mental illnesses, often times institutionalized. I found them among closeted gays, fearing the stigma from letting the broader society know who they were.

I went out of my way to make these “expendables” my friends. Today, people, who are in jail or have been in jail, people who suffer long-term mental illnesses, and gay people like Ray and Gil make up a large portion of my friendship circle. I have listened to long narratives of rejection by family, church, preachers and society in general.

A tragedy is that we have large numbers of “expendables” in a land where Christians and Christian churches are very popular and public. Self-identified Christians make up a majority of Americans, yet the phenomenon of “expendable” neighbors persists. How can we have so many followers of the great friend of expendables in a nation that professes to uphold his values?

Churches —  their preachers and parishioners — are the key to changing these attitudes. But it can be dangerous work for one’s career and reputation. Out of fear and unfounded prejudice, many Christians keep away from “expendables.”

Two millennia ago, powerful people also decided that Jesus was expendable and brutally killed him. Is it possible that we need to re-examine what it means to be a Christian?

Reciting the Apostles’ Creed can be an act of solemn devotion or it can be Christians’ most fraudulent act. I suspect that Christians and people of all religious beliefs joining with “expendables” in the cause of justice for all is the higher and truer standard.