Amid the tough talk on Russia, President Obama is speaking more softly about China but still seems ready to brandish a geopolitical stick against Asia’s emerging superpower, another unnecessary confrontation, says the Independent Institute’s Ivan Eland.

As President Obama visited China, he insisted that the United States welcomed China’s rise and wanted that country to play a bigger role in regional and global affairs; but that rhetoric is largely hokum.

The United States has been either the premier superpower or the only superpower in the world since World War II, exercising an outsize role in global and East Asian Affairs. In world history, many times rising powers have had tensions or conflict with status quo or declining powers, because the latter resist a more equal relationship with the new “upstart.” America is no exception. 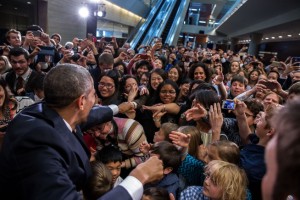 President Barack Obama shakes hands with staff and their families during a meet and greet at the U.S. Embassy in Beijing, China, Nov. 10, 2014. (Official White House Photo by Pete Souza)

Xi Jinping, China’s leader, has recently spoken of a “new type of great power relations” with the United States. This is diplomatic speak for China wanting its own sphere of influence in East Asia, much as other great powers have had a security buffer in the past.

The American foreign policy elite self-servingly dismisses this Chinese desire as “so 19th century”; of course, they would howl if any country tried to encroach on the U.S. spheres of influence Europe (why the United States is very nervous about Russian activities in Ukraine) and Latin America (traditionally enforced vigorously with the Monroe Doctrine).

In East Asia, a similar situation exists. The United States has a far forward security position, the Chinese would likely call it a neo-imperial containment policy of China, using formal or informal bilateral military alliances left over from the Cold War (with Australia, New Zealand, Thailand, the Philippines, Japan, South Korea and Taiwan); a forward naval presence based out of Japan, Guam, and Hawaii; and U.S. troops stationed in Japan, South Korea, and Australia.

Furthermore, the United States is negotiating an ambitious pan-Asian free trade agreement leaving out China. Lastly, the United States is discouraging its allies from entering into an Asian development bank run by China. If all of this doesn’t strike an objective observer as fulfilling Obama’s welcoming rhetoric, that should be no surprise. Great powers regularly issue friendly pronouncements and then coldly act in what they perceive to be their own interests.

Yet the United States really should back off a bit and let China have a security buffer. No reason exists that both powers cannot live together peacefully, given the broad Pacific Ocean moat that separates them. They are not like France and Germany, powers with a contentious common border in the late 19th and first half of the 20th century, but more like the United States and Britain, which allowed its breakaway rogue colony to rise peacefully primarily because of the broad Atlantic Ocean buffer between them.

An even bigger reason exists today for the United States to let China peacefully expand its sphere of influence than existed in the late 19th when Britain tolerated the rise of the United States: Both China and the United States are already nuclear powers. Would the United States really want to sacrifice its cities in an atomic conflagration if one of China’s minor border disputes with East Asian neighbors, some of which are U.S. allies, exploded into war, and then went nuclear?

The dirty little secret is that the U.S. public is being endangered to defend wealthy East Asian allies that should spend more money on their own security and could band together to be the first line of defense against a rising China. However, none of these allies has any incentive to spend more on their defenses while under the shield of U.S. conventional and nuclear forces. Essentially, the ridiculous situation has arisen whereby China loans the United States the money to help other wealthy countries defend themselves against … well, China.

Yet, in the future, the United States won’t possess the relative resources needed to contain China, as it did when it contained the Soviet Union during the Cold War. The sclerotic communist economy of the USSR was never more than half the size of the U.S. GDP. As China’s rapidly growing economy becomes equal to or exceeds that of the United States, continuing the containment policy will become ever more costly and could strain even the large U.S. economy.

The sluggish economic growth that the United States has been experiencing has been induced by the already huge $18 trillion public debt, a significant portion of which is attributable to U.S. wars and other unneeded efforts to act as the world’s neo-imperial policemen, including in East Asia.

More positively, the huge intertwining of the Chinese and American economies via trade, investment and lending probably acts as somewhat of a brake against conflict between the two countries, note President George W. Bush’s apology during the episode in 2001 of a Chinese fighter jet buzzing and damaging a U.S. reconnaissance plane in international waters, that wasn’t there during the Cold War with the Soviet Union.

Nonetheless, the United States should rethink its forward-based military presence that is designed essentially to quarantine China and prevent this great power from creating a sphere of influence for its own security. The Chinese may be authoritarians and the Americans may be more pluralistic, but China does have legitimate security concerns, and the U.S. military is in China’s face, not vice versa.

A pullback of all U.S. forces to Hawaii and Guam would give China some breathing room and reduce the danger of a dangerous confrontation between two nuclear-armed powers.

Ivan Eland is Director of the Center on Peace & Liberty at The Independent Institute. Dr. Eland has spent 15 years working for Congress on national security issues, including stints as an investigator for the House Foreign Affairs Committee and Principal Defense Analyst at the Congressional Budget Office. His books include The Empire Has No Clothes: U.S. Foreign Policy Exposed, and Putting “Defense” Back into U.S. Defense Policy. [This story originally was published as a blog post at HuffingtonPost.]

7 comments for “Picking a Fight with China”