The American Right likes to bash public school teachers for supposedly deviating from an “America-can-do-no-wrong” approach to history and generally “failing” the students, but that is a misdiagnosis of the problem, says Lawrence Davidson.

Every so often books and articles appear bemoaning the state of U.S. education. The complaints address all levels, from the elementary grades to high school to college and university. You can get a sense of this by going to Google and doing a search under the heading “American Education.”

Most of what comes up is negative. In 2001 President Bush, who is not exactly a poster boy for U.S. schooling, told us that, at the lower levels, a whole lot of American children were being “left behind.” And, at the upper levels, who can forget the angst of Alan Bloom who, in 1987, told us higher education was destroying students’ minds and ruining the country by endorsing relativism and multiculturalism. 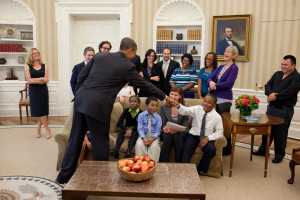 President Barack Obama and a boy from the education documentary “Waiting for Superman” fist-bump in the Oval Office, Oct. 11, 2010. (Official White House Photo by Pete Souza)

The most recent example of this negativity is William Deresiewicz’s book Excellent Sheep: The Miseducation of the American Elite and the Way to a Meaningful Life. Deresiewicz’ s concern is with America’s elite colleges and universities which, in his view, “manufacture students who are smart and talented and driven, yes, but with little intellectual curiosity and a stunted sense of purpose.” As a result “what we’re getting is thirty-two flavors of vanilla.”

I think that all those who complain in this fashion, be they parents, teachers, administrators or politicians, are missing the point. It may seem odd, but those most critical of today’s schools seem not to recognize what mass education is really designed to accomplish. Such education has always had two main objectives: one vocational and the other civic. Let me elaborate.

Historically, the notion of educational proficiency has always been tied to making a living. In other words, either through apprenticeship or formal schooling, what most students have learned over the ages is what their economic environments required of them.

Thus, today, whether one wants to be a lawyer or an auto mechanic, the primary curriculum is vocational and everything else is, shall we say, elective. This elective category may or may not include critical thinking skills which, in any case, is a subject that is often disapproved of by local school boards.

By the time American kids are in junior high school a good number of them know the difference between what is vocationally valuable and what is not, and most focus their attention on what they believe will be economically beneficial. This means that it is not the school per se, or the teachers, that are actually setting the criteria for learning. It is the community job market.

Therefore, if the economy demands for most students reading and writing abilities at the level of business memos and math skills sufficient to balance a check book, that is the proficiency, on average, that schools will produce. At some point higher administrative, math, science or other skills might be taught to a minority. That is what we call specialization.

Ask yourself how many American students want to, or will be required to, know anything beyond the most rudimentary math and science in their future workplaces? Does between 20 and 30 percent sound right? Because that is the number of 12th grade (white) students who presently have those skills.

Thirty years ago computer knowledge was not a job-related or, for that matter, a social communication required skill. Schools largely ignored it and relatively few people had real proficiency in this area. Today, the situation is completely reversed and almost all schools teach such skills.

Actually, almost all American schools, even the “failing” ones, deliver employment knowledge relevant to their locale. You might think that this claim is off base, but it really is not. High-end public schools cater to students who, by virtue of their class background, mostly have professional career expectations. And that is the educational preparation they get.

Just so, low-end schools (admittedly underfunded) cater to those who for the most part have been conditioned by their circumstances to have different expectations, and they are educated accordingly. I am certainly not claiming this is a good thing, only that this is the way it works.

If you want to change it, just relying on standardized tests and teacher performance won’t do it. Rather, you have to alter education’s class-driven expectations. To achieve this sort of change means a lot of economic rearrangement and revenue shifting. The U.S. has never been willing to do these things.

Historically, the other major goal of U.S. education has been the production of loyal, relatively passive citizens. This is not the same thing as U.S. citizens knowing the three branches of government, recognizing the Bill of Rights, or naming their senator and congressperson. Actually, most American students do not know such things and so, in this regard, are civics deficient.
However, this is not the level we are speaking of. Students in the lower grades repeat the Pledge of Allegiance in their homerooms every morning and become aware that they are citizens of the United States. They learn a sanitized and idealized history of their country and internalize the myth that it is the “best and freest” nation on the planet – all of which is reinforced by their general cultural milieu and the media.

Floating around at the edges of many high schools are military recruiters who play on these feelings. This is particularly true of the schools in poor neighborhoods, where the military is often seen as the only viable vocational alternative to crime on the streets and the illusion of making it in the sports and entertainment industries.

Producing loyal and uncritical citizens is something our schools, at all levels, do pretty well. The uncritical thinking aspect of this goal is quite important and puts in doubt the place of critical thinking in the national curriculum. For a nation of critical thinkers would, from the perspective of citizen loyalty, be a dangerous thing. It brings up the question of whether you can have a stable community when everyone is thinking independently about politics and policy.

If you are not satisfied with the status quo in education, but are not willing to acknowledge where the real issues and challenges lie, you might be tempted to find a scapegoat. That is what happens when the media and politicians begin pointing fingers at “bad teachers.”

Are there “bad teachers” – that is, teachers who lack the skills or interest to make a good faith effort to address the given curriculum? Of course there are, just as there are incompetent people in every other profession. However, poor student scores on standardized tests is not good evidence of teacher incompetence. More likely it is evidence that the exams are testing for information which the student’s local economic culture deems unimportant.

If there is a “problem” with America’s teachers it is not that they are incompetent, but rather that they are idealists. Most of them want to produce well-rounded, well-read, intelligent young men and women who are at least as knowledgeable as those who concoct standardized tests.

Most students, however, quickly become confirmed materialists. They want to learn what they need to be well-employed and well-integrated into their communities. Everything else is just an elective.

3 comments for “Misdiagnosing What Ails US Schools”