Contradictions beset the U.S. war over Iraq and Syria. The principal target ISIS wouldn’t even exist but for the U.S. invasion of Iraq in 2003, and al-Qaeda affiliates in Syria have benefited from defections of U.S.-backed “moderates.” But now warplanes and missiles are supposed to fix things, says ex-CIA analyst Paul R. Pillar.

As the United States embarks on a new air war in Syria, disturbing anomalies abound. Some of them were reflected in the front-page headlines of a couple of major U.S. newspapers Tuesday morning, which probably also reflected slightly different deadlines of the two papers but were substantively telling nonetheless.

The Washington Post’s headline was “U.S. Launches Strikes in Syria.” In the corresponding place in the New York Times, in an edition evidently put to bed before the new offensive in Syria could be reported, we read, “Weeks of U.S. Strikes Fail to Dislodge ISIS in Iraq.” 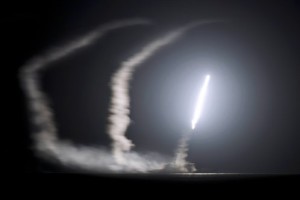 The question that immediately comes to mind is: why should we expect what has failed to dislodge, much less “destroy”, a group in Iraq to succeed if we simply do more of the same thing in Syria? The question is all the more acute given that the United States is aiding and cooperating with the government in Iraq but barely on speaking terms with the one in Syria.

Another disconcerting dichotomy concerns the organizations that were the targets of the newest strikes. The United States announced that it struck not just ISIS but also an al-Qaeda offshoot that has ambitions to conduct terrorist attacks in the West and possibly the United States.

The carefully worded official announcements used the word “imminent” but leave us to conclude that what was imminent was not the carrying out of an actual attack in the West but only perhaps the planning for one, and that striking the group involved hitting a target of opportunity, made convenient by having these strikes coincide with the strikes against ISIS in Syria.

But at least terrorist attacks in the West, consistent with the al-Qaeda strategy of attacking the “far enemy,” are evidently part of this group’s ambitions, underscoring that this is not the case with ISIS, which is following a quite different strategy of trying to build its self-styled caliphate through direct application of force in the Middle East.

So why have President Barack Obama and others spoken so darkly about a terrorist threat to us from ISIS, especially when before Monday they had not even mentioned this other group? (The correct answer to that question can be found in our own fears, politics, and habitual ways of thinking about foreign threats.)

The very complicated lines of conflict and suspicion that are relevant to the ISIS story and are barely concealed by affixing the term “coalition” to a subset of the players give rise to other anomalies. Russia criticized the United States for using force in Syria without obtaining something like an authorization from the United Nations Security Council; Iran made a similar criticism, albeit in a rather mild and pro forma way.

But the regime in Syria, the country the Russians and Iranians have both considered an ally and whose sovereignty they evidently were sticking up for, sounded more positive. The United States, we are repeatedly told, did not “coordinate” with the Assad regime, but it informed that regime in advance about the strikes, and the regime tacitly cooperated by not using its air defense capabilities to mess with the forces conducting the strikes.

That leads to the uncomfortable unanswered question about the desired political end state in Syria. Nothing that has been said since the strikes has helped to answer that question. The operations director of the U.S. Joint Chiefs of Staff essentially changed the subject when reporters asked about whether the air attack would aid the Assad regime.

The “moderate” Syrian opposition, in whom the only apparent hope for answering the unanswered question has been placed, displayed this week some of the divisions that have been a major source of their weakness. The president of the Syrian Opposition Coalition made a positive statement, but the commander of Harakat Hazm, a rebel group often talked about as moderate and reliable enough to be entrusted with U.S. lethal assistance, said “the only beneficiary of foreign intervention in Syria is the Assad regime.”

Those are some of the most obvious anomalies about this offensive. We ought to be at least as disturbed about some of the effects that may be less immediately visible, especially effects in hearts and minds of people in the region.

The U.S. military has again demonstrated its awesome technical precision, in which it seems it is almost capable of firing a missile through the window of a bathroom and killing the person on the toilet while sparing others in the same house. But even with these technical capabilities, casualties among the innocent are inevitable.

Reportedly there were civilian casualties from this week’s strikes in Raqqa, the principal ISIS-held town in Syria. An unemployed university graduate in Raqqa said afterward, “We know the history of American strikes in Afghanistan, Iraq and Yemen. When civilians are going to be killed, sorry is not enough.”

And whatever are the actual facts about collateral damage and casualties, the usual suspicions and cynicism that come into play whenever the superpower uses its military muscle in this part of the world are being aroused by this latest U.S. action.

The sentiments are those of the columnist in Egypt’s Al Ahram who wrote that the United States and its allies “want to divide our lands, destroy our nations, occupy our homelands and monopolize our choices, without shedding one drop of their blue blood. They have no problem that our cheap Arab blood flows in rivers, it it achieves their goals and purposes.”

Such beliefs are grossly inaccurate and unfair, of course, but the beliefs exist. If we are worried about anti-U.S. terrorism, we ought to worry at least as much about such perceptions and sentiments, and about the extremism they nurture, as about the kind of kinetic accomplishments that can be observed with a gun camera or a reconnaissance drone.