From the Archive: Richard L. Fricker, a courageous journalist and frequent writer at Consortiumnews, died on Sept. 12 from heart failure. Among Fricker’s important work was his investigation of the U.S. government’s PROMIS software which preceded the NSA’s Orwellian PRISM, as Fricker noted last July.

Long before Edward Snowden’s claims or revelations that the National Security Agency and the Central Intelligence Agency were monitoring and tracking the Internet, cell phones, e-mails and any other electronic communication they could get their hands on using a program known as PRISM, there existed PROMIS [Prosecutors Management Information Systems].

PROMIS was designed in the late 1970s and ‘80s to bring Department of Justice criminal case management from the dark ages into the light of the computer age. In the spring of 1981, the Reagan Administration hailed PROMIS as one of law enforcements greatest assets. By 1983, PROMIS had morphed into the behemoth of intelligence gathering. It was not state of the art it was the art. 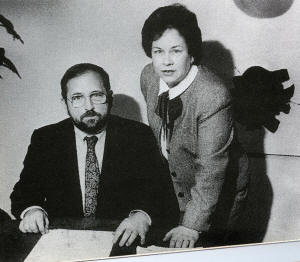 William Hamilton, developer of the PROMIS software, and his wife Nancy.

Over the ensuing decades PROMIS is reported to have been used by the DOJ, CIA, NSA, and several foreign intelligence agencies including Israel’s Mossad. The ownership of PROMIS has been the subject of federal court hearings and a congressional investigation.

The capabilities of PROMIS as a data collection and tracking program have never been a secret. But the only discussion of PROMIS has been about theft and black-market sales. Neither the courts nor Congress have ever inquired as to privacy issues or the ethics of the program. There has been no rending of political robes as seen with the Snowden case. In fact, the function of PROMIS has been discussed in open court and various public arenas.

PROMIS is a tracking program with enhancements by Washington, DC-based Inslaw Inc., owned by Bill and Nancy Hamilton. PROMIS was developed under a Law Enforcement Assistance Administration [LEAA] grant. Bill Hamilton was employed by NSA for six years. He left the agency in 1966.

PROMIS was designed to track the vast amount of criminal cases piling up in DOJ offices across the country. Bill Hamilton, in an interview for this story, recounted, “It was always a tracking program. It was designed to keep track of cases in local U.S. Attorneys’ offices, which means street crimes, keep track of the scheduled events in court, what actually takes place, who’s there, witnesses, police officers, conclusions, convictions, acquittals, whatever.”

As the LEAA dissolved in the late days of the Carter Administration, the Hamiltons formed Inslaw and began to make modifications to the public domain PROMIS. The short version of the story: As originally designed, PROMIS ran only on 16-bit computers, but using their own funds, INSLAW converted the program to run on 32-bit VAX computers which were massive for their time.

The Reagan administration was very taken with the Inslaw version of PROMIS. In March 1982 Inslaw was awarded $9.6 million to install the program in 20 U.S. Attorney’s offices, with further installations in the remaining 74 offices, if successful. This would be the last government contact the Hamiltons would receive, not because the system failed quite the contrary, it was too successful.

Hamilton explained, “We developed it originally just for prosecutors. But some of our users wanted to have it shared with the courts and the police. So, the software was engineered to make it adaptable. In making it highly adaptable, a byproduct was to make it useable for non-prosecutor tracking and that made it adaptable totally outside the criminal justice system.”

It became obvious with the latest round of modifications any data system could be integrated into PROMIS. And those data systems could interact that is, combine with each other forming a massive tracking data base of people via government documents such as birth and death certificates, licenses, mortgages, lawsuits or anything else kept in a data base. PROMIS could also track banking transactions, arms shipments, communications, airplane parts again, anything kept in a data base.

With the discovery of these new capabilities Inslaw’s problems began. Unknowingly, the Hamiltons had embarked on an odyssey winding from the White House and the heart of the Reagan inner circle, bankruptcy court, a congressional investigation, secret informants, the CIA, NSA, and the Mossad.

The odyssey began in February 1983 when Dr. Ben Orr, an Israeli prosecutor, came to Hamilton’s office for a demonstration. He left, never placed an order and was never seen again. This was just one of the many demonstrations the company provided potential customers and the press. There was no shroud of secrecy about PROMIS or its capabilities.

Shortly after Dr. Orr’s visit, DOJ terminated payments to Inslaw, but refused to return the software. The company soon [June 1986] found its way into bankruptcy court. Inslaw put forth the claim that DOJ had stolen their software and made a concerted effort to drive them out of business. Bankruptcy Judge George Bason agreed.

In a 216-page opinion delivered in 1987, Judge Bason wrote that DOJ used “trickery, fraud and deceit” to steal PROMIS. He was later overruled by the DC District Court of Appeals on jurisdictional grounds. A previous district court supported his findings that PROMIS had been stolen. Bason became one of the very few Bankruptcy judges to not be re-appointed.

As the PROMIS odyssey continued, information began to surface that DOJ had provided the NSA and CIA with the enhanced 32-bit PROMIS. Stories began to circulate that friends of the Reagan Administration were selling black-market versions of PROMIS to anyone willing to pay the price.

Time and time again the veracity of government employees was called into question. In 1989, the chairman of the House Judiciary Committee, Rep. Jack Brooks, D-Texas, launched what would become a three-year investigation into the theft of PROMIS and DOJ efforts to drive INSLAW out of business.

The Brooks report dated Aug. 11, 1992 not only agreed with Bason’s findings but went further: “High government officials were involved individuals testified under oath that Inslaw’s PROMIS software was stolen and distributed internationally in order to provide financial gain and to further intelligence and foreign policy objectives.”

The report includes scathing comments about former Attorney General Richard Thornburgh and several ranking DOJ staffers. Brooks recommended a settlement of Inslaw claims for damages and the appointment of a special prosecutor. Neither happened. Brooks said in an interview at the time, “[Inslaw] was ravaged by the Justice Department.” They were, he said, “treated like dogs.”

By this time nothing in the report surprised the Hamiltons. Seven months earlier they had discovered that their 1983 visitor, Dr. Ben Orr, was in fact Rafi Eitan, chief of the Israeli Defense Force’s [IDF] anti-terrorism intelligence unit. They further learned he left Washington carrying a copy of PROMIS.

The DOJ explanation was that he was given the 16-bit version, not the new improved 32-bit VAX version. The question would be: why the subterfuge? And why show off the superior 32-bit VAX version and then only provide the cheaper model? DOJ has never answered the question.

Through all this, Inslaw survived; Ireland installed PROMIS for case management, to track land records and in the bank credit system. Hamilton noted that every credit card transaction is tracked by PROMIS. The Netherlands uses the program to keep track of all the inmates in their prison system. The city of Rome has PROMIS for use in their tax office. In fact PROMIS is being legally used in several countries around the world.

Illegally? Who knows. The Canadian government once wrote Inslaw asking for an operating manual. Inslaw never sold PROMIS to Canada. A similar event popped up with Lithuania when a member of its parliament asked for help with its PROMIS program. In each case, when told they may have a bootleg version, the reply was, it must be a different PROMIS. To date, Inslaw has never received a dime for any government recommended settlements, some as high as $50 million.

Hamilton has declined to suggest that PROMIS was the frontrunner to PRISM. He said flatly in the interview for this article that his only information about PRISM is from news accounts.

Regardless of the Inslaw affair, PROMIS is still out there, still tracking whatever its masters require. And still, to this day, no one in government or otherwise has inquired, not about what PROMIS can do, but rather what is PROMIS doing, for whom and why.

PROMIS has been toiling in the intelligence caverns for nearly 30 years that’s a lot of data consumption, that’s a lot of tracking. Where is the PROMIS data? Compared to 30 years of information gathering and tracking by PROMIS, PRISM could be considered the equivalent of digital binge drinking.

Richard L. Fricker was based in Tulsa, Oklahoma. His last book, The Last Day of the War, is available at https://www.createspace.com/3804081.