From the “war on drugs” to the “war on terror,” U.S. society has grown increasingly militarized with police now armed to the teeth with weapons of war to deploy against American citizens, a process that apes U.S. violence-oriented actions abroad, says Brian J. Trautman.

The police response to public protests in Ferguson, Missouri, in the wake of the deadly Aug. 9 shooting of Michael Brown, Jr., an unarmed 18-year-old black man killed by a white police officer, was a prime illustration of the hyper-aggressive nature of policing in America today.

The residents of Ferguson fed up with hostile and abusive police behavior continue to flood the streets to demand justice for Mike Brown and other victims of police brutality. They have been joined in solidarity by people of conscience in other cities (e.g., Oakland, NYC). 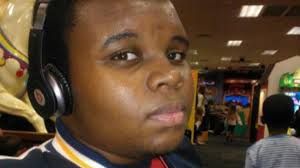 Michael Brown, the victim of a police shooting in Ferguson, Missouri.

Their anger and frustration was exacerbated by the heavy-handed tactics used against the mostly peaceful protestors in Ferguson during the first week or so of the demonstrations tear gas, rubber bullets, smoke, deafening sirens as well as assault rifles fixed on protestors were some of the violent methods employed by law enforcement.

In addition, a mandatory curfew imposed by the Missouri governor, verbal threats of physical harm from police, and arrests of journalists, among other ill-advised and counterproductive reactions, only escalated the tensions between protestors and police.

The police action in Ferguson sparked a much-needed and long overdue national discussion about the rise of the police-industrial complex. One important outcome of this conversation has been an increased awareness among the American public of how local and state police became armed with equipment meant for war.

The fact that government programs and funding provided police with military-grade weaponry and that these arms have been deployed against American citizens has provoked the ire of liberal and conservative lawmakers alike a rare show of bipartisanship in today’s political climate.

The national media has now joined independent media in shining a spotlight on the paramilitary structure of modern-day policing. However, even now, the vast majority of media and politicians continue to ignore the fundamental causes of the increasingly violent policies and procedures of law enforcement, as it would require critically questioning and challenging the systems and institutions that produce them.

To better understand, effectively reduce, and eventually prevent the underlying factors which led to the police slaying of Mike Brown and other unarmed citizens, we must openly debate two major forms of violence prevalent in the United States: systemic violence (aka structural violence) and militarism.

Systemic violence is the type of violence that is deeply-embedded in a nation’s social, economic, educational, political, legal and environmental frameworks, and tends to be rooted in government policy. It is organized violence with an historical context, and often manifests in subtle but very specific and destructive ways.

Examples include entrenched racism, classism and discrimination and economic inequality and relative poverty. Systemic violence paves the way for authoritarian and undemocratic values such as exploitation, marginalization and repression, especially of underrepresented, underprivileged populations.

Militarism is the ideology that a nation must maintain a strong military capability and must use, or threaten to use, force to protect and advance national interests. America’s militaristic approach to overseas conflicts can be found in many aspects of its domestic policies.

Systemic violence and militarism are interconnected and mutually dependent. They go hand in hand, building on and reinforcing each other. Both define and direct American policing, which regularly treats citizens like enemies of the state. We need not look further for an example than the military-style police assault in Ferguson.

Systemic violence and militarism are responsible for the flow of military-grade equipment such as mine resistance vehicles and semi-automatic weapons to police departments across the country.

In an op-ed I wrote last month entitled “Escalating Domestic Warfare,” I discussed a report from the American Civil Liberties Union (ACLU) on the emergence of a militarist ethos in American policing. The ACLU’s research showed that the militarization of police has become excessive and lethal.

For example, SWAT teams are being deployed primarily to serve search warrants in low-level drug cases, and these teams are using methods and equipment traditionally reserved for war to do so. The ACLU also found that police militarization increased substantially after each of three major national events: the initiation of the “War on Drugs,” the attacks of 9-11, and a series of Supreme Court decisions which have eroded the rights guaranteed in the Fourth Amendment.

Over the past two decades, the violent crime rate in the United States has decreased sharply. The militarization of policing, then, is counter-intuitive. Historically, nations that have militarized their police have done so not because of violent crime but rather to rapidly quell potential mass civil uprisings against tyranny, oppression and injustice.

A statement released by Veterans for Peace (VFP), a global organization of military veterans and allies working to build a culture of peace, calls for justice for Mike Brown and his family through, in part, “a complete, swift and transparent investigation” into his death.

VFP strongly condemns the use of violence in any form to secure justice. Instead, they implore protestors “to continue to channel their anger towards building power, solidarity and creating change nonviolently.”

The organization expresses deep outrage for the state violence in Ferguson: “police over reaction to community expressions of grief and anger is the outcome of a national mindset that violence will solve any problem.”

According to VFP, the military-industrial complex and a permanent war mentality are two major sources of this violence: “Thirteen years of war has militarized our whole society. We see equipment designed for the battlefield used in our nation’s streets against our citizens. We see police in uniforms and using weapons indistinguishable from the military.”

This militaristic approach to domestic policing, says VFP, has resulted in tragedy on our streets: “Week after week we see reports of police abuse and killings of innocent and unarmed civilians.” Justice for the victims is often denied: “time and time again we see police given impunity for their crimes and citizens left in disbelief wondering where to turn next.”

VFP reminds us of the repeated targeting of communities of color by police. The Ferguson protests are a natural reaction to this legacy of mistreatment and injustice. Police brutality against young black males, in particular, VFP argues, was a powder keg waiting to explode: “the unrest in Ferguson and similar incidents of citizen rebellions are the outcome of state abuse and neglect, not of hoodlums and opportunists. Eventually, any people who are held down will attempt to standup.”

VFP’s statement also warns that militarism at home cannot be solved until we end our nation’s militarism abroad: “We cannot call for peace in the streets at home and at the same time conduct war for thirteen years in the streets of other nations.”

America’s violent system of policing and its antagonistic foreign policy are interrelated. Therefore, they must be addressed together before reforms can be effective and help to end our culture of violence.

Solutions-based approaches begin with local, state and federal legislators acknowledging that many current laws and policies create and fuel systemic violence and militarism. They must then find the wisdom and muster the courage to act to change or abandon those laws and policies.

One strategy that our towns and cities can adopt to contribute to this process is nonviolent community policing. Retired police captain Charles L. Alphin, who served for over 26 years in the St. Louis City Police Department, offers suggestions for such a policing model in an article titled “Kingian Non-violence: A Practical Application in Policing.”

Alphin believes Kingian nonviolence holds great potential for American policing. He gives examples of how this model of policing can work using Dr. Martin Luther King Jr.’s philosophy of nonviolence. Alphin contends, as Dr. King did, that how we approach policing cannot stand alone from teaching nonviolence in the school, home, streets and in every phase of life.

Alphin also explains that he applied Kingian philosophy effectively in interrogation of criminal suspects and in the organization of communities to get at the root causes of violence and drugs, effectively empowering communities to identify and work on these problems at the grassroots level (note: this community-based solution to violence is a feature of the theory and practice of transformative justice).

There is an urgent need for models of paramilitary policing to be replaced with models of nonviolent community policing. Freedom and democracy are at stake. So are the lives of our innocent citizens.

The killing of Mike Brown can be a pivotal moment for how we treat the systemic violence and militarism that produced the policing system of today. Ferguson has awakened many Americans to the realities of police militarism on their streets and to the urgent need to demilitarize the police.

We cannot afford public apathy on this issue any longer. The people must insist on alternative models of policing that respect and protect civil and human rights. To reverse the trend of police violence in this country, we must work to eliminate the systemic and militaristic roots of this violence, remembering that military-style policing is inextricably linked to America’s belligerence abroad.

No matter how you slice it, the weapons of war and other violent tactics used against Ferguson protestors will go down as a tragic chapter in American history. Still, robust and meaningful people-powered action for progressive social change can help make this chapter a turning point toward the positive transformation of policing in the United States. This action, change, and transformation are inevitable because justice demands it.

Brian J. Trautman is an instructor of peace studies at Berkshire Community College in Pittsfield, Massachusetts, a peace activist with Berkshire Citizens for Peace and Justice, and an Army veteran. He is also a member of Veterans for Peace. On Twitter @BriTraut.