Between the War on Drugs and the War on Terror, the United States has witnessed a transformation of its law enforcement, from lightly armed neighborhood policemen to militarized units deploying weapons of warfare, including armored personnel carriers, as Brian J. Trautman explains.

Last month, the American Civil Liberties Union (ACLU) released a report titled “War Comes Home: The Excessive Militarization of American Policing,” shedding much needed light on the emergence of a militarist ethos in policing across the nation.

In a review of public records, such as incident reports, requested from more than 260 law enforcement agencies in 25 states and the District of Columbia, the ACLU found that, from the responses received, 818 SWAT operations from 20 local law enforcement agencies located in 11 states fully met their research criteria, which took geographic diversity into account, among other factors. The SWAT incidents that were analyzed fell in the time period between July 2010 and last October. 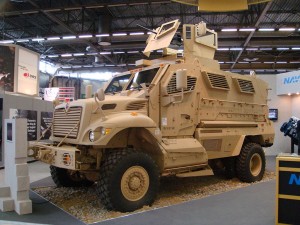 A Mine Resistant Ambush Protected vehicle or MRAP, like ones now being used by domestic SWAT teams in the United States. (Credit: Grippenn)

Based on the ACLU’s examination, it was determined that paramilitary policing is neither sporadic nor isolated; rather, it is widespread and pervasive. Perhaps the most eye-opening and disturbing aspects of the ACLU’s report are the revelations of when, why and how Special Weapons and Tactics (SWAT) teams are being used.

The trend toward hyper-aggressive tactics of today’s law enforcement are having tragic consequences, for both civilians and law officers. Property is being destroyed. Civil liberties are being violated. SWAT teams are employing methods and equipment which have traditionally been reserved for war. For example, roughly 500 law enforcement agencies now possess Mine Resistant Ambush Protected (MRAP) vehicles built to withstand armor-piercing roadside bombs.

According to the report, the root causes of the excessive militarization of policing and its reshaping of cultural values are numerous. They include the “War on Drugs,” the events of Sept. 11, 2001, and a series of Supreme Court decisions which have eroded the rights guaranteed in the Fourth Amendment and given police unprecedented access to private homes.

The ACLU also learned of various instances in which SWAT teams deployed when children were on the premises, sometimes when police had advanced warning that children would be on site. And it was not uncommon, the ACLU discovered, for family pets to be needlessly shot during raids.

There are five primary findings presented in the report:

1.   The excessive militarization of American policing has largely been the result of federal programs which have incentivized the use of “unnecessarily aggressive weapons and tactics designed for the battlefield.”

2.   There has been virtually no public oversight concerning the militarization of American policing.

3.   In the majority of cases, SWAT teams were deployed to execute search warrants in low-level drug investigations, whereas traditional uses of SWAT (in hostage or barricade scenarios) totaled considerably fewer cases: According to the ACLU, “SWAT teams were more than twice as likely to force entry into a person’s home when searching for drugs than for other deployments.”

4.   People of color were disproportionately impacted by paramilitary weapons and tactics and were the primary targets of drug searches.

5.   War-like tactics and equipment are unnecessary and increase the risk of harm to people and damage to property.

The report also includes a number of recommendations. These include:

–Because the militarization of policing has permeated American society, systemic reform including a transformation in police culture is needed.

–Different agencies of the federal government are responsible for the trend of aggressive policing. Accordingly, reform should occur throughout government. Programs that incentivize the militarization of policing must be curtailed.

–Probable cause must not be the sole justification for SWAT teams to enter homes, even in cases when a search warrant has been issued.

–Appropriate restraints of SWAT should be developed by state legislatures and municipalities.

As mentioned earlier, the ACLU sought public records from law enforcement agencies nationwide to gain better insight into police capabilities and behavior. Not every state cooperated.

For example, law enforcement councils in Massachusetts refused to release this information, claiming that they were not government agencies but private, non-profit organizations, thus exempt from public record laws. Law enforcement in the Bay State has ostensibly turned to privatization of policing to avoid transparency and accountability.

Modern policing, which frequently treats citizens like enemies of the state, should deeply concern every American, regardless of political affiliation. Over the past two decades, the violent crime rate in the United States has decreased sharply. Innovations in computer technology have provided law enforcement with new crime prevention tools, especially in surveillance. The excessive militarization of American policing, then, is counterintuitive.

The drug war and counter-terrorism efforts may represent two of the official justifications for current trends in policing. Historically, however, nations have militarized their police to rapidly quell potential mass civil uprisings against tyranny and injustice.

Whatever the reasoning, abusive, hyper-aggressive policing against communities, particularly economically disadvantaged communities of color, as well as the stripping of civil liberties, are real threats to freedom and democracy and thus urgently require serious national attention and meaningful action.

Brian J. Trautman writes for PeaceVoice, is a military veteran, an instructor of peace studies at Berkshire Community College in Pittsfield, MA, and a peace activist. On Twitter @BriTraut.

← A New Generation of Nuclear Subs
Caving In to Israeli Intransigence →