Chilling words of ethnic hatred and even genocide uttered by prominent Israelis were the political backdrop for Israel’s military offensive against Gaza, which killed more than 1,800 people including many children, writes David Swanson.

With the morgues full, Gazans are packing freezers with their dead children. Meanwhile, the worst images to be found in Israel depict fear, not death and suffering. Why the contrast? 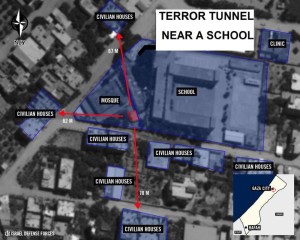 Israel justified its bombardment of civilian targets in Gaza by claiming that Hamas militants operated near schools, mosques and other civilian structures, as cited in this Israeli graphic supposedly showing a “terror tunnel” running near a school. (Israeli government photo)

If the Israeli intent is defensive, why are 97 percent of the deaths Gazan, not Israeli? If the targets are fighters, why are whole families being slaughtered and their houses leveled? Why are schools and hospitals and children playing on the beach targeted? Why target water and electricity if the goal is not to attack an entire population?

The mystery melts away if you look at the stated intentions of the Israeli government as not depicted by the U.S. media but readily available in Israeli media and online.

On Aug. 1, Deputy Speaker of Israel’s Parliament Moshe Feiglin posted on his FaceBook page a plan for the complete destruction of the people of Gaza using concentration camps. He had laid out a somewhat similar plan in a July 15th column.

Another member of the Israeli Parliament, Ayelet Shaked, called for genocide in Gaza at the start of the current war, writing: “Behind every terrorist stand dozens of men and women, without whom he could not engage in terrorism. They are all enemy combatants, and their blood shall be on all their heads. Now this also includes the mothers of the martyrs, who send them to hell with flowers and kisses. They should follow their sons, nothing would be more just. They should go, as should the physical homes in which they raised the snakes. Otherwise, more little snakes will be raised there.”

Taking a slightly different approach, Middle East scholar Dr. Mordechai Kedar of Bar-Ilan University has been widely quoted in Israeli media saying, “The only thing that can deter [Gazans] is the knowledge that their sister or their mother will be raped.”

The Times of Israel published a column on Aug. 1, and later unpublished it, with the headline “When Genocide Is Permissible.” The answer turned out to be: now.

On Aug. 5, Giora Eiland, former head of Israel’s National Security Council, published a column with the headline “In Gaza, There Is No Such Thing as ‘Innocent Civilians’.” Eiland wrote: “We should have declared war against the state of Gaza (rather than against the Hamas organization). . . . [T]he right thing to do is to shut down the crossings, prevent the entry of any goods, including food, and definitely prevent the supply of gas and electricity.”

It’s all part of putting Gaza “on a diet,” in the grotesque wording of an advisor to a former Israeli Prime Minister.

If it were common among members of the Iranian or Russian government to speak in favor of genocide, you’d better believe the U.S. media would notice. Why does this phenomenon go unremarked in the case of Israel? Noticing it is bound to get you called an anti-Semite, but that’s hardly a concern worthy of notice while children are being killed by the hundreds.

Another explanation is U.S. complicity. The weapons Israel is using are given to it, free-of-charge, by the U.S. government, which also leads efforts to provide Israel immunity for its crimes.  Check out this revealing map of which nations recognize the nation of Palestine.

A third explanation is that looking too closely at what Israel’s doing could lead to someone looking closely at what the U.S. has done and is doing. Roughly 97 percent of the deaths in the 2003-2011 war on Iraq were Iraqi. Things U.S. soldiers and military leaders said about Iraqis were shameful and genocidal.

War is the biggest U.S. investment, and contemporary war is almost always a one-sided slaughter of civilians. If seeing the horror of it in Israeli actions allows us to begin seeing the same in U.S. actions, an important step will have been taken toward war’s elimination.

David Swanson is an anti-war activist who writes at http://WorldBeyondWar.org  His new book is War No More: The Case for Abolition. He blogs at http://davidswanson.org and http://warisacrime.org and works for http://rootsaction.org. He hosts Talk Nation Radio. Follow him on Twitter: @davidcnswanson and FaceBook.

14 comments for “If a Genocide Falls in the Forest”