In an earlier time, U.S. post offices were more than just places to mail letters. They were noble structures, symbols of democracy, stone-and-mortar testimony to the value of community. But many are now neglected and up for sale, laments Gray Brechin.

Who owns America’s post offices and their continent-spanning gallery of public art? The “as is” sale of the Bronx’s decaying central post office, and of so many other post offices recently sold or for sale, begs the question of Americans for whom those buildings were intended and for which they paid.

The once-noble lobby of the Bronx post office has filled with the cheesy clutter that choked New York City’s original Penn Station before wrecking balls leveled that elegant Victorian-era structure in the 1960s. At the Bronx post office, garish signs and obstructive furniture mute the dialogue between marble-framed murals by artists Ben Shahn and his wife Bernarda Bryson, while neglect and a botched restoration renders some of their images virtually illegible. 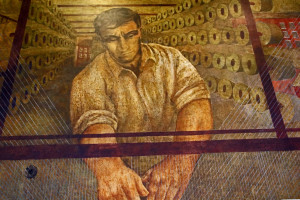 One of 13 murals in the Bronx Post Office created by New Deal artists. (Photo from Wikipedia)

Chartered to “bind the nation together” by providing secure, efficient and reasonably priced service to all, the U.S. Postal Service is arguably the most democratic of all government services. Shahn and Bryson fittingly painted Walt Whitman at one end of the lobby over a service window. Pointing to the last stanza of his poem “As I Walk These Broad, Majestic Days,” the good gray poet reminds an attentive audience that “Democracy rests finally upon us.”

The Bronx palace was one of over 1,100 post offices erected and embellished during Franklin Roosevelt’s epic public works campaign that did much to extricate the nation from the Great Depression.

An avid stamp collector, Roosevelt took a keen interest in the postal service. He actively participated in the design of six post offices near his Hyde Park home in the Hudson Valley and he well understood that such buildings fulfill many functions beyond the commercial. They are at once centers of community and symbolic of government’s integrity, and he believed they should look it.

Excellent materials, construction, and design typify New Deal post offices, many of which were embellished with murals and sculptures specific to their locations and function.

At the National Gallery of Art’s dedication in 1941, FDR told his audience that New Deal art, unlike Old Masters, was not ancient, foreign, and sequestered but “painted by [Americans] in their own country, and painted about things that they know and look at often and have touched and loved.” Public art, he concluded, was of “the present life of all the living and creating peoples all who make and build.”

Heroic images of those builders now struggle for visibility through dingy shellac and past the muddle in the Bronx lobby. Shahn and Bryson’s murals rank among the most important examples of post office art now imperiled by a nationwide fire sale of public assets. Few Americans are aware of what they are losing, and why.

Current USPS management insists that the shift to email has so curtailed its revenues that it must sell the properties it holds, but its fiscal crisis smells strongly of the “shock doctrine” of calculated austerity that has devastated so much of the world and is now coming home to America.

Having survived the telegraph, telephone, and faxes, the postal service could easily ride out the Internet’s inroads were it not hobbled by the Postal Accountability and Enhancement Act.

Hastily passed by a lame-duck Republican Congress in 2006, the PAEA hamstrings the USPS by requiring it to pre-fund employee health benefits for 75 years into the future within just a decade while at the same time barring it from offering “non-postal” services that could compete with the private sector. The $5.5 billion drag the PAEA annually imposes on the USPS accounts for most of its well-publicized deficit.

The PAEA is at once accomplishing a long-stated aim of conservative think tanks and the Republican Party to privatize the 239-year old service while throwing a windfall of public property onto the market from which Sen. Dianne Feinstein, D-California, is profiting. Those properties include hundreds of architecturally distinguished buildings, many containing unique works of art. The National Trust for Historic Preservation has named America’s pre-war post offices among its most endangered treasures.

Nowhere have citizens and their representatives resisted more vociferously than in the Bronx and in Berkeley, California, whose century-old downtown post office is also on the block.

Asserting that the USPS has largely ignored environmental and preservation law, the Berkeley-based National Post Office Collaborate blocked the sale of the Stamford, Connecticut post office in federal court. Berkeley Rep. Barbara Lee and Bronx Rep. Jose Serrano directed the Advisory Council of Historic Preservation to investigate the sales. In April, the ACHP issued a report to Congress sharply critical of the USPS stewardship of its historic and artistic properties.

The auto-liquidation of the USPS could easily be halted if it offered more rather than fewer services. Sen. Elizabeth Warren, D-Massachusetts, has joined others recommending that it revive the postal banking system scrapped by Congress in 1966. Postal banking would serve millions of currently unbanked Americans while generating ongoing revenue for the USPS.

America’s historic post offices, and the public services for which they were built, could be saved if current management, Congress and President Barack Obama had the will to do so.

Far more than utilitarian containers for conducting business, they are our piazzas, the places we meet one another and in doing so see our landscapes, history, work, and ourselves reflected back from their walls. They could be so much more than they are. Like the democracy they were built to embody, the responsibility to save them rests finally upon us.

Gray Brechin is a writer and historian based in Berkeley, California.

9 comments for “The Fire Sale of the Post Offices”