Exclusive: Secretary of State Kerry has earned an unenviable reputation for bombastic exaggeration at times when diplomatic caution is needed, a pattern that he has demonstrated again in rushing to judgment over the shoot-down of Malaysia Airlines Flight 17, says ex-CIA analyst Ray McGovern.

The last time a major war loomed on the near horizon, Secretary of State John Kerry played fast and loose with the facts. In a speech on Aug. 30, 2013, he solemnly claimed, no fewer than 35 times, “we know” that the Syrian government of Bashar al-Assad was responsible for chemical attacks outside Damascus on Aug. 21.

Just a few days later it became abundantly clear that Kerry did not know. There was instead a great deal of uncertainty within the U.S. intelligence community. And, to their credit, my former colleagues in CIA and in the Defense Intelligence Agency stood their ground by refusing to say “we know.” 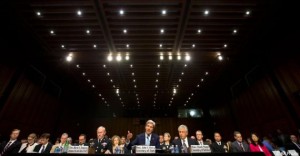 Secretary of State John Kerry (center) testifies on the Syrian crisis before the Senate Foreign Relations Committee on Sept. 3, 2013. At the left of the photo is Gen. Martin Dempsey, chairman of the Joint Chiefs of Staff. and on the right is Defense Secretary Chuck Hagel. No senior U.S. intelligence official joined in the testimony. U.S. State Department photo)

Indeed, the dog-not-barking moment in the Syria-sarin case was the absence of U.S. intelligence officials sitting behind Kerry when he testified about his supposed knowledge to the U.S. Congress. Unlike the tableau in 2003 when CIA Director George Tenet positioned himself behind Secretary of State Colin Powell to give silent endorsement to Powell’s false allegations about Iraqi WMD to the United Nations Security Council, Kerry had no such support when he made his case against Syria’s government, although the clueless U.S. mainstream news media failed to notice this significant absence.

We Veteran Intelligence Professionals for Sanity (VIPS) tried to alert President Barack Obama to this lack of consensus among our former colleagues in a Memorandum for the President on Sept. 6. Determined to avoid a redux of the fraudulent intelligence performance on Iraqi WMD, our former colleagues refused to “fix the intelligence around the policy” again. The opposition was so strong that not even the malleable CIA Director John Brennan could give Kerry the usual “Intelligence Assessment” he wanted. So the best the Obama administration could cook up was something called a “Government Assessment” bereft of verifiable evidence and shorn of the normal dissents that intelligence analysts file with traditional estimates.

The reason for this internal intelligence community resistance was that, from the start, it made little sense that Assad would have launched a sarin attack right outside Damascus just as UN inspectors were unpacking at their Damascus hotel, having arrived in Syria to examine another chemical incident that Assad was blaming on the rebels. Further, the evidence quickly began to accumulate that the Syrian rebels had sarin and that they may well have been the ones who released it on Aug. 21 in a scheme to push Obama across his “red line” against the use of chemical weapons and induce the U.S. military to join the civil war on the rebel side.

At the time, the rebels were increasingly desperate. They had suffered a string of setbacks earlier last summer. The Turks, who had been aiding the rebels, also were growing convinced that only open U.S. military involvement could avert a looming defeat. So they set out, with apparent support of hawks in the U.S. State Department, to mousetrap President Obama into “retaliating” against Syria for crossing the “red line.”

Kerry’s performance on Aug. 30 with all his “we knows” was a clarion call for attacking Syria and might have prevailed, were it not for the fact that Joint Chiefs of Staff Chairman Martin Dempsey intervened and talked sense to the President. Less than 24 hours after Kerry spoke, Obama surprised virtually everyone in Official Washington by announcing that he had decided not to attack Syria immediately as expected, but rather would go to Congress for authorization.

How close the world came to another U.S. war was underscored by the fact that after Obama’s decision, France, which had been eager to attack, had to be told to decrease the alert status of the fighter-bombers it had on the tarmac. Israel had to be told it could relax the highest-alert posture of its defenses.

On Sept. 1, Senators John McCain and Lindsey Graham angrily confirmed that Dempsey’s intervention had put the kibosh on their clearly expressed desire to attack Syria post-haste.

Kerry: Giving It the College Try

But an attack on Syria was still in play and Kerry gave a bravura performance in his Sept. 3 testimony to a Senate Foreign Affairs Committee whose leaders showed by their own remarks the degree to which they, too, were lusting for an attack on Syria. Kerry’s testimony on Syria included a transparent attempt to play down the effectiveness of al-Qaeda affiliates in gaining control of the armed opposition to Assad.

Kerry’s testimony drew a highly unusual personal criticism from Russian President Vladimir Putin. In a televised meeting of the Russian Presidential Human Rights Council on Sept. 4, Putin said, “He [Kerry] is lying, and he knows he is lying.  It is sad.”

But Kerry continued to dissemble. Still arguing for war on Syria, Kerry was asked at the end of a Sept. 9 press conference in London whether there were anything Assad could do to prevent a U.S. attack. Kerry answered (quite dismissively, in view of subsequent events) that Assad could give up every one of his chemical weapons, but “he isn’t about to do that; it can’t be done.”

However, such a plan was already afoot, being pushed by Putin’s diplomats. Later that same day, Russian Foreign Minister Sergei Lavrov and his Syrian counterpart announced that Syria had agreed to allow all its chemical weapons to be removed and destroyed. Cutting out Kerry, Obama had cut a deal directly with Putin. All Syria’s chemical weapons have now been destroyed.

So this is the backdrop against which to give credence, or not, to Kerry’s stacking up the evidence against Russia for the shoot-down of the Malaysian airliner on Thursday over Ukraine.

Ray McGovern works with Tell the Word, a publishing arm of the ecumenical Church of the Saviour in inner-city Washington.  He served as a CIA analyst for 27 years.