Exclusive: U.S. policymakers have long behaved like spoiled, destructive children treating Iraq as if it were some meaningless plaything. The game has been about who “wins” or “loses” in Washington, not who lives or dies in Iraq, a moral failure that ex-CIA analyst Ray McGovern addresses.

When I saw the Washington Post’s banner headline, “U.S. sees risk in Iraq airstrikes,” I thought, “doesn’t that say it all.” The Post apparently didn’t deem it newsworthy to publish a story headlined: “Iraqis see risk in U.S. airstrikes.” Then, in an accompanying article, authors Gregg Jaffe and Kevin Maurer observed nonchalantly that “Iraq and the Iraqi people remain something of an abstraction,” a point that drove me to distraction.

Further putting me in a bad mood, the story’s first paragraph about the latest bloody debacle in Iraq declared: “The sudden collapse of Iraqi forces in the face of lightly armed insurgents has catalyzed an emotional debate within the U.S. military about a war that, just a few years ago, seemed on the brink of going down in history as a success.” 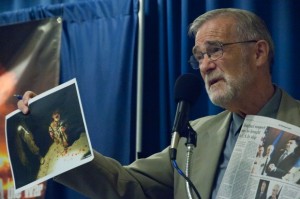 Ex-CIA analyst Ray McGovern holding up the iconic photograph of a six-year-old Iraqi girl who survived the accidental killing of her parents by U.S. troops in 2004. (Photo credit: Stars and Stripes.)

Fresh in my mind was Robert Parry’s article that same day (June 19) exposing the myth of the “successful surge” in Iraq. That, in turn, had prompted me to re-read my own retrospective on the celebrated “surge” of 2007, reconstructing the play-by-play on its genesis and how, with the help of media cheerleaders, that myth enabled President George W. Bush and Vice President Dick Cheney to ride off into the sunset on Jan. 20, 2009, to all appearances not having lost the war in Iraq.

In the wake of recent events, the corporate-owned-and-operated media appears determined to apply its most imaginative legerdemain to convince us of this past “success” while moving to the blame-game mode of faulting President Barack Obama for the current mess.

The mainstream U.S. media still shies away from pointing fingers at war criminals Bush/Cheney et al, whose “decent interval” for getting out of office without a “defeat” on their record was purchased with much blood, both American and Iraqi.

The hundreds of thousands of Iraqis killed or wounded during the politically motivated “surge” and in the carnage both before and afterwards can remain, for folks like the neocons at the Post, “something of an abstraction.” And the media can avoid mention of the 1,000 U.S. troops killed in 2007 protecting what often amounted to sectarian Shia militias ethnically cleansing Baghdad of much of its Sunni population — as well as defending the Bush/Cheney legacy.

Yet, for the Post’s Jaffe and Maurer, U.S. troops unlike Iraqis are no “abstraction.” And so the writers indulge in the selective grieving over the cost of war. They quote a U.S. Army officer to whom they grant “anonymity so he could discuss his feelings” about the war: “My sadness is not for the Iraqis, but for the wasted effort so many of us gave and bought at so high a price.”

American lives, apparently, are the ones that matter.

Even before reading the Post’s article, I had been getting more and more angry hearing reports that Tal Afar was “changing hands” again. Does Tal Afar ring any bells with you? This ancient city of a quarter-million people, strategically located in northwestern Iraq near the Syrian border, may jog your memory mostly for the many times it has “changed hands” over the past decade or so.

And here it goes again, you think to yourself. Last weekend it fell to jihadist insurgents of the Islamic State in Iraq and Syria; on Friday, Iraqi armed forces won back most of Tal Afar, but a battle raged nearby for control of the huge Baiji oil refinery and the airport.

But I remember Tal Afar chiefly for the killing/wounding of an Iraqi family there by U.S. troops on Jan. 18, 2004. It was a small massacre, as massacres go in Iraq. However, for some reason perhaps the Post’s casual reference to Iraqis being an “abstraction” I cannot get out of my head the desperate words of Linda, Willy Loman’s wife in “Death of a Salesman”:

“He’s a human being, and a terrible thing is happening to him. So attention must be paid. He’s not to be allowed to fall in his grave like an old dog. Attention, attention must finally be paid to such a person.”

In January 2005, photographer Chris Hondros was embedded with U.S. troops in Tal Afar, then the scene of frequent clashes between U.S. forces and insurgents. As the curfew was coming into force just after dusk, a red car rushed past the patrol, ignoring warning shots. Fearing a suicide attack, the soldiers opened fire.

Inside the car was an ethnic Turkoman family of eight. The parents, Camille and Hussein Hassan, were killed; the five children in the back wounded before the soldiers realized that it was a civilian car. They carried the traumatized children to the pavement and started binding their wounds.

Hondros’s photographs of the incident revealed not only the tragedy inflicted upon so many civilians in Iraq, but also highlighted the life-or-death decisions soldiers face under duress. Especially haunting was the picture of the youngest girl, Samar Hassan, crying and spattered with the blood of her parents. The blood on the pavement, her hands, and her face makes this photo an instantly disturbing image.

The U.S. military, which had been hugely successful in keeping such troubling photos out of the public eye, was outraged. Hondros’s embedded assignment was terminated. But the image of Samar Hassan made it through.

Interviewed by the New York Times six years later, she  explained : “My brother was sick, and we were taking him to the hospital … [and] this happened … We just heard bullets. My mother and father were killed, just like that.”

Linda Loman, I am convinced, was absolutely correct in insisting, “Attention Must be Paid,” and so I framed my remarks at the Veterans For Peace press conference at the National Press Club on June 19 around that photo of Samar Hassan and, by some unusual luck, the story was carried in the U.S. military newspaper Stars and Stripes on Friday.

If the photo of Samar Hassan does not stir us with compassion and determination to do whatever we can do to prevent such tragedies in the future, we have been hardened beyond human. Attention must also be paid, I suggested at the press conference, to the legs of the U.S. soldier with the flashlight, standing beside Samar.

Those legs are attached to one of the soldiers we sent off to “serve” in a war of aggression in Iraq. Some of our soldiers may occasionally be trigger-happy, but they are not monsters. Nor are they immune to the kind of moral injury that comes from being part of such killing, such blood, such pain. Those legs were part of a soldier with the 1st Battalion, 5th Infantry Stryker Brigade Combat Team of the 25th Infantry Division out of Ft. Lewis, Washington.

Four years ago, the Stars and Stripes labeled Fort Lewis now Fort Lewis-McChord “the most troubled base in the military” due to its inability to treat post-traumatic stress disorder (PTSD) or address mental health problems. Fort Lewis-McChord consistently has had one of the highest suicide rates of army bases across the country. I find myself wondering if those legs are still part of a relatively normally functioning body and soul.

So, if another U.S. “surge” is needed, let it be a surge of compassion. And any finger-pointing has to include us, unless we wish to give up any pretense that America is still a democracy.

It is we who allow our soldiers to be put in such circumstances. Camille Hassan is our sister; Hussein Hassan our brother; Samar and her brothers and sisters our children. For those of us who really believe this to be true, let us be challenged by the words of Rabbi Abraham Heschel, who spoke out so strongly against the war in Vietnam:

“Indifference to evil is more insidious than evil itself. … Few are guilty, but all are responsible.”

As our policymakers plan next steps in Iraq, let us do all we can to prevent the Iraqi people from remaining “something of an abstraction.”

Ray McGovern works with Tell the Word, a publishing arm of the ecumenical Church of the Saviour in inner-city Washington. He is a former Army infantry/intelligence officer and CIA analyst.

7 comments for “Iraqis Are Not ‘Abstractions’”