A half century ago, in summer 1964, brave Americans challenged the entrenched racism of white-ruled Mississippi and overcame bars against black voting. Now, those gains are under attack from right-wing efforts to restrict voting and reverse the legacy of Freedom Summer, writes Brian J. Trautman.

In 1960, although black Mississippians comprised nearly 50 percent of the state’s population, less than 7 percent of its eligible black constituency was registered to vote, representing the lowest percentage in the Union. In some counties, no blacks were registered to vote at all.

Despite ratification of the Fifteenth Amendment 90 years earlier guaranteeing the right of blacks to vote, terrorist tactics from fear and intimidation to beatings and lynchings had prevented blacks from exercising that right. Legislation in several states, including state constitutional amendments beginning in 1890, had severely restricted black voter participation through measures such as poll taxes, background checks and literacy tests. By 1960, the southern black population had been politically disenfranchised for almost a century. 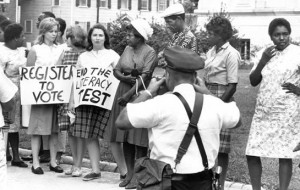 Voting rights activists in Mississippi during Freedom Summer in 1964.

To effect social and political change, civil rights leaders understood that they needed to challenge the status quo of racial intolerance being advanced by groups like the Citizens’ Councils, a national network of pro-segregationists formed in 1954 after the U.S. Supreme Court ruling in Brown vs. Board of Education, which began ending segregated schools. The mission of Citizens’ Councils, representing the deep-rooted white-segregationist and white-supremacist establishment, was to preserve white power and block racial integration.

To challenge this power structure, the civil rights movement had to confront the denial of voting rights and other measures designed to keep African-Americans as second-class citizens. It was decided that there was no better place to embark on this monumental task than Mississippi, arguably the country’s poorest, most violent and most segregated state.

In 1961, Robert (Bob) Moses, a local field secretary for the Student Nonviolent Coordinating Committee (SNCC), became the head of SNCC’s voter education and registration operations in the state. Building on the sacrifices of earlier civil rights workers who battled racial injustice,

Moses provided seminal leadership over the next couple of years. He was instrumental in the formation of strong coalitions among SNCC leaders and other civil rights figures as well as sympathetic whites.

In 1963, Moses and SNCC carried out a mock election called “Freedom Vote,” with the intention of demonstrating both the will of black residents to vote and that in the absence of violence and unfair administrative red tape they would be participating in the electoral process.

To accommodate interested black Mississippians, organizers opened polling places in black churches and businesses all over the state, including in Jackson, the state capital and final stop of the “Freedom Rides” of 1961. For most, this was the first time in their lives they felt empowered to contribute to a free, democratic institution. Tens of thousands voted.

In January 1964, with media and law enforcement officials looking on, a former sharecropper turned civil rights activist named Fannie Lou Hamer helped lead a march of voting rights activists in front of the Forrest County courthouse in Hattiesburg, Mississippi. The demonstration was organized to protest discriminatory tactics of the County Registrar and his cronies which prevented blacks from registering to vote. It marked the state’s first Freedom Day (of many to come) and the beginning of what would become a momentous and historic year for direct action, democracy and social justice in Mississippi.

On June 20, 1964 eight days after the first anniversary of the assassination of civil rights leader Medgar Evers in Jackson, Mississippi a massive nonviolent campaign was launched with an ambitious agenda to challenge white domination and end segregation by registering black citizens to vote.

The ten-week voter registration drive known as the Mississippi Summer Project, or Freedom Summer, was organized by the Council of Federated Organizations. COFO was comprised of SNCC as well as the Mississippi branches of the three other major civil rights organizations: the Congress of Racial Equality (CORE), the National Association for the Advancement of Colored People (NAACP), and the Southern Christian Leadership Conference (SCLC).

The heart and soul of the Project were the more than 700 out-of-state volunteers, most of whom were economically privileged young white student volunteers from Northern colleges. They were trained in nonviolent techniques and joined hundreds of local and regional activists who provided much-needed support and guidance.

The spirit and resolve of the Project was tested at the onset when three young volunteers (a black Mississippian, James Chaney, and two white northerners, Andrew Goodman and Michael Schwerner) went missing near Meridian, Mississippi. Their bodies were discovered six weeks later in Philadelphia, Mississippi. They had been kidnapped and killed. It was later learned that members of the local police and Ku Klux Klan were responsible for the slayings.

The criminal act of terror, however, had the opposite effect intended. From the day the three youths went missing to the time their fate was learned to the end of Freedom Summer, the incident emboldened Project organizers and developed into a rallying cry for action, both in the state and across the nation.

Voter registration was the primary goal of Freedom Summer. Organizers recognized that the effort would require a set of strategic approaches, especially education. To address the racial inequalities in Mississippi’s educational system and to assist communities pass the literacy requirement of the state’s voter registration process, roughly 40 “Freedom Schools” were started in towns and cities throughout Mississippi.

School organizers and teachers, many of whom were white college students, held that a basic quality education gave individuals and communities the power and voice needed to be effective agents of social change. The curriculum included the three R’s (reading, writing and arithmetic), as well as civics, black history, civil rights philosophy, and leadership skills.

At night, the schools became centers for political meetings where strategy was discussed. With approximately 3,000 students, the Freedom Schools drew more than three times the expected enrollment. The success of the schools went beyond Freedom Summer, inspiring social programs like Head Start and giving credibility to the alternative education movement.

The integrated party sent 68 delegates (64 blacks and four whites) to the 1964 Democratic National Convention (DNC) in Atlantic City, New Jersey. They argued vehemently for their delegates to be seated rather than those of the segregated party. In an impassioned speech to the DNC credentials committee, MFDP delegate Fannie Lou Hamer spoke eloquently about how she was nearly killed on several occasions for showing interest in voting: “Is this America the Land of the Free and Home of Brave where we have to sleep with our telephones off of the hook because our lives be threatened daily because we want to live as decent human beings in America.”

While they did not succeed in unseating the MDC, the MFDP worried President Lyndon Johnson and his advisers and rattled the foundation of the Democratic Party. It alerted them to the great energy and determination behind civil rights activism and black political activity in the Deep South.

From the early days of planning for Freedom Summer and all through the campaign the mentality and vision of the organizers and participants can best be described by the title of the folk song “Keep Your Eyes on the Prize (Hold On),” which became a civil rights anthem the prize being the end of white persecution of blacks.

The voter registration drives of Freedom Summer brought national attention to black marginalization in the voting process. They are credited with giving significant political momentum to this critical issue.

Freedom Summer was influential in highlighting the need for federal voting rights legislation and in pressuring Congress to pass the Voting Rights Act of 1965, which, among other things, outlawed the brutal tactics Southern states had depended on for decades to stop blacks from voting.

While Freedom Summer helped bring about radical social and political reforms in the state of Mississippi and across the South, much remains to be done in terms of securing voting rights. In June 2013, the Voter Rights Act of 1965 was essentially gutted by the U.S. Supreme Court in Shelby County v. Holder. The Court’s decision in this case struck down key protective provisions of the Act, permitting nine states to alter their election laws without advance federal approval.

Two of the most highly publicized voter suppression laws to be enacted in some of these states have been voter identification requirements and cutbacks on early voting, which affects minorities in particular. Initiatives are currently underway across the country to restore the voter protections for which activists of the Civil Rights-era worked tirelessly to attain.

One such effort is the Mississippi Freedom Summer 50th Anniversary Conference being held June 25-29 at Tougaloo College in Jackson, Mississippi, where the half-century anniversary of Freedom Summer will be commemorated and attendees will strategize on the future struggle for social justice.

Dozens of churches, homes and businesses were bombed or burned during Freedom Summer in 1964. More than a thousand activists were arrested. Hundreds were beaten. At least three were killed. But even in the face of such enormous adversity, courageous men and women persevered and eliminated long-standing barriers to voting while significantly improving the education and social and political awareness of generations of black Mississippians. In addition, they laid the foundation for black citizens to be elected to office in Mississippi, with over a thousand elected since 1964, more black elected officials than any other state.

Freedom Summer participants faced constant threats and harassment from white supremacist groups and racial hatred and abuse from white residents and authorities, yet they endured; overcame inhumanity; and accomplished feats many did not believe were possible. The campaign and its victories became an indelible part of American society and set a shining example for future nonviolent social change movements.

A new documentary titled “Freedom Summer,” from award-winning veteran filmmaker Stanley Nelson (“Freedom Riders,” “The Murder of Emmitt Till”), chronicles the organizational and operational efforts of the Mississippi Summer Project. The film shares the historical accounts and stories of Freedom Summer largely from the perspective of the people who lived it. It premieres on PBS American Experience on June 24.

Brian J. Trautman is an instructor of peace studies at Berkshire Community College in Pittsfield, Massachusetts. He is an Army veteran and a peace activist with groups such as Berkshire Citizens for Peace and Justice and Veterans for Peace. On Twitter @BriTraut.

← Iran Answers Questions on Explosives
Iraqis Are Not ‘Abstractions’ →