The battle lines over “Net neutrality” are taking shape, between an approach that would let providers offer pricier fast lanes and an alternative plan that would regulate the Internet as a utility to protect consumers, reports Michael Winship.

The vote was taken at the Federal Communications Commission on Thursday morning, as drums pounded and hundreds of demonstrators supporting Net neutrality chanted outside FCC headquarters.

In a packed meeting room, from which a handful of vocal protesters was ejected, the majority of commissioners approved a so-called Notice of Proposed Rulemaking, the latest step in a process that will determine the fate of a free and open Internet. Along with FCC Chairman Tom Wheeler, Democratic commissioners Mignon Clyburn and Jessica Rosenworcel voted in favor, despite reservations. 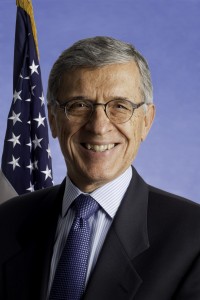 “I would have done this differently,” Rosenworcel told the meeting. “We move too fast to be fair.”

So the tally was 3-2 along party lines, Democrats vs. Republicans, setting the stage for what will be, as Michael Weinberg, vice president of the media law public interest group Public Knowledge calls it, “the summer of Net neutrality.” Enacting the notice now triggers an extended four-month public comment period so that the FCC can continue to hear, it said, “from Americans across the country.”

According to an FCC fact sheet: “The Internet is a vital platform for innovation, economic growth and free expression in America. And yet, despite two prior FCC attempts, there are no rules on the books to prevent broadband providers from limiting Internet openness by blocking content or discriminating against consumers and entrepreneurs online.

“The ‘Protecting and Promoting the Open Internet’ Notice of Proposed Rulemaking (NPRM) begins the process of closing that gap, which was created in January 2014 when the DC Circuit struck down key FCC Open Internet rules.

“This Notice seeks public comments on the benefits of applying Section 706 of the Telecommunications Act of 1996 and Title II of the Communications Act, including the benefits of one approach over the other, to ensure the Internet remains an open platform for innovation and expression. While the Notice reflects a tentative conclusion that Section 706 presents the quickest and most resilient path forward per the court’s guidance, it also makes clear that Title II remains a viable alternative and asks specifically which approach is better. In addition, the proposal asks whether paid prioritization arrangements, or ‘fast lanes,’ can be banned outright.”

More simply, as Jason Abbruzzese writes at Mashable.com, there are two basic options in the notice: “One is a scaled back version of the original rules” that’s Section 706 “that would allow for companies to strike pay-for-preference deals that are scrutinized by the FCC. The second” that’s Title II “would reclassify broadband as a public utility, making it eligible for stricter regulation, including a ban on pay-for-preference deals.”

While media reform groups applauded the FCC’s acknowledgement of the intense public reaction, they were unhappy that the “proposed rulemaking” seems to favor the option that could give preferential treatment a “fast lane”  to those with the deepest pockets.

This in spite of Chairman Wheeler’s professed willingness to at least consider reclassifying the Internet as a public utility, like telephones and electricity. Michael Weinberg, vice president of Public Knowledge said:

“This proposal from the FCC proves that the public is having an impact. After extensive public outcry, the FCC is asking questions about the fundamental legitimacy of fast lanes and exploring the viability of Title II. This shift simply would not have occurred without the outpouring of concern from organizations, companies, Members of Congress and individuals who rely on a truly open internet every day.

“Despite this response, we are convinced that the net neutrality pathway the FCC is exploring remains insufficient to guarantee a truly open and neutral internet. The FCC’s proposal still falls well short of real net neutrality rules.”

Because of its emphasis on Section 706, Weinberg continued, “It would create a two-tier internet where ‘commercially reasonable’ discrimination is allowed on any connections that exceed an unknown ‘minimum level of access’ defined by the FCC. A two-tier internet is anathema to a truly open internet, and rules under section 706 authority are insufficient to prevent harmful paid prioritization.”

Former FCC Commissioner Michael Copps, now Special Advisor to the Media and Democracy Reform Initiative at Common Cause, also was skeptical. “Let’s be clear,” he said. “Any proposal to allow fast lanes for the few is emphatically not net neutrality. The clear common-sense prerequisite for an Open Internet is Title II reclassification, guaranteeing the agency’s authority to protect consumers and ensure free speech online.

“The FCC should conduct public hearings on the matter outside of Washington, DC, so it can hear from the people who will have to live with the decisions it makes at this pivotal moment for the future of the Internet. It’s no exaggeration to say that every American has a stake in its deliberations.

“The presumptions in this item appear little different from what was reported about the initial draft. It opens a door to Title II classification but still tilts in favor of the weak legal framework that so far has gotten us nowhere. It opens a door to wireless being covered by net neutrality, but still retains the scope of the earlier rules which excluded wireless.

“And it still relies too much on porous metrics, like what is ‘commercially reasonable’, that ISPs [Internet Service Providers] can drive an 18-wheeler through. Today should have been about adopting strong safeguards, enforceable rules, and sound legal footings. It wasn’t. So it will take lots of citizens speaking out now to tell the FCC it is headed in the wrong direction.”

Free Press President and CEO Craig Aaron made the following statement: “Millions of people have put the FCC on notice. A pay-for-priority Internet is unacceptable. Today, both Commissioners Mignon Clyburn and Jessica Rosenworcel stated that they support prohibitions on paid prioritization and other forms of unreasonable discrimination. Tom Wheeler spoke passionately about the open Internet, but his rousing rhetoric doesn’t match the reality of his proposal.

“The only way to accomplish the chairman’s goals is to reclassify Internet service providers as common carriers. The Commission says it wants to hear from the public; it will be hearing a lot more. This fight will stretch into the fall, but there’s one clear answer: The American people demand real Net neutrality, and the FCC must restore it.

“We’re encouraged by much of what was said during today’s meeting. But words amount to little without the rules to back them up. If Chairman Wheeler is sincere in his objections to a fast-lane, slow-lane Internet, then reclassification is the only way to prevent this terrible scenario from becoming a reality.”

At a press conference Thursday afternoon, Aaron described the reluctant yes votes from Commissioners Clyburn and Rosenworcel as indications of growing “strong dissatisfaction,” a development he believes will strengthen even further as commissioners “get outside the Beltway and talk to real Internet users so they can grasp the importance of this issue and the momentum that’s growing around it.”

Over the coming weeks, Aaron said, success “will be dependent on greater pressure and organizing efforts.”

In other words, the battle has just begun.

3 comments for “Two Paths toward the Net’s Future”