Over the years, U.S. “public diplomacy” has pulled reputable NGOs into the U.S. propaganda orbit, sometimes via funding, sometimes by creating a revolving door to government jobs, as a letter from over 100 scholars suggests happened to Human Rights Watch. Followed by HRW’s response to the criticism.

Human Rights Watch characterizes itself as “one of the world’s leading independent organizations dedicated to defending and protecting human rights.” However, HRW’s close ties to the U.S. government call into question its independence.

For example, HRW’s Washington advocacy director, Tom Malinowski, previously served as a special assistant to President Bill Clinton and as a speechwriter to Secretary of State Madeleine Albright. In 2013, he left HRW after being nominated as Assistant Secretary of State for Democracy, Human Rights & Labor under John Kerry. 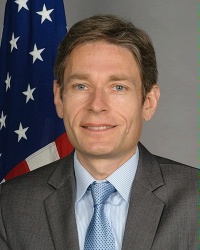 Tom Malinowski, longtime director of Human Rights Watch’s Washington office, was sworn in as Assistant Secretary of State for Democracy, Human Rights and Labor on April 3, 2014.

In her HRW.org biography, Board of Directors’ Vice Chair Susan Manilow describes herself as “a longtime friend to Bill Clinton” who is “highly involved” in his political party, and “has hosted dozens of events” for the Democratic National Committee.

In his capacity as an HRW advocacy director, Malinowski contended in 2009 that “under limited circumstances” there was “a legitimate place” for CIA renditions,the illegal practice of kidnapping and transferring terrorism suspects around the planet. Malinowski was quoted paraphrasing the U.S. government’s argument that designing an alternative to sending suspects to “foreign dungeons to be tortured” was “going to take some time.”

HRW has not extended similar consideration to Venezuela. In a 2012 letter to President ChÃ¡vez, HRW criticized the country’s candidacy for the UN Human Rights Council, alleging that Venezuela had fallen “far short of acceptable standards” and questioning its “ability to serve as a credible voice on human rights.” At no point has U.S. membership in the same council merited censure from HRW, despite Washington’s secret, global assassination program, its preservation of renditions, and its illegal detention of individuals at GuantÃ¡namo Bay.

Likewise, in February 2013, HRW correctly described as “unlawful” Syria’s use of missiles in its civil war. However, HRW remained silent on the clear violation of international law constituted by the U.S. threat of missile strikes on Syria in August.

The few examples above, limited to only recent history, might be forgiven as inconsistencies or oversights that could naturally occur in any large, busy organization. But HRW’s close relationships with the U.S. government suffuse such instances with the appearance of a conflict of interest.

We therefore encourage you to institute immediate, concrete measures to strongly assert HRW’s independence. Closing what seems to be a revolving door would be a reasonable first step: Bar those who have crafted or executed U.S. foreign policy from serving as HRW staff, advisors or board members. At a bare minimum, mandate lengthy “cooling-off” periods before and after any associate moves between HRW and that arm of the government.

Your largest donor, investor George Soros, argued in 2010 that “to be more effective, I think the organization has to be seen as more international, less an American organization.” We concur. We urge you to implement the aforementioned proposal to ensure a reputation for genuine independence.

We recently received a petition, which included your signatures, expressing concern that Human Rights Watch’s “close ties to the US government call into question its independence.” Human Rights Watch recognizes the importance of maintaining our independence and credibility, and we believe your concern is misplaced.

If you visit our website you will see that we routinely expose, document and denounce human rights violations by the US government, including torture, indefinite detention, illegal renditions, unchecked mass surveillance, abusive use of drones, harsh sentencing and racial disparity in criminal justice, and an unfair and ineffective immigration system.

The petition provides three examples of supposed “inconsistencies or oversights,” but in each case the authors have either mischaracterized or misunderstood our position.

First, they cite a 2009 article quoting our former Washington director, Tom Malinowski, saying that “under limited circumstances” there is a legitimate place for renditions. The petition mistakenly claims he was supporting unlawful CIA renditions. A “rendition” is the transfer of a person in custody from one jurisdiction to another, which is legal under certain circumstances and practiced by almost all countries (the extradition of criminal suspects is one common form of rendition). Malinowski was certainly not endorsing the CIA’s illegal rendition program, which entailed transferring individuals without due process protections to countries where they faced torture. That practice was repeatedly denounced by Malinowski and by Human Rights Watch. Indeed, we have called for a criminal investigation into former President George W. Bush, Vice President Dick Cheney, Defense Secretary Donald Rumsfeld, and CIA Director George Tenet (among others), for these and other serious human rights abuses.

We have long denounced illegal rendition (sometimes called extraordinary rendition) committed by the US government in the name of fighting terrorism, including in such reports as:

Second, the petition’s authors also wonder why we questioned Venezuela’s candidacy for the United Nations Human Rights Council, but not that of the United States.

A central concern on council membership is whether a government takes the council and its special procedures seriously. Venezuela has not allowed a single UN special rapporteur to visit since 1996. It has ignored eight requests for visits during the past decade by rapporteurs seeking to examine the state of freedom of expression, freedom of association, extrajudicial executions, human rights defenders, and the independence of judges and lawyers. (Only three other countries have such a poor record of non-cooperation: Turkmenistan, Uzbekistan and Zimbabwe.)

In 2013, Venezuela had by far the worst voting record of council member countries. It opposed virtually all resolutions on country-specific situations put to the vote, including motions on Sri Lanka, Belarus and Iran that were supported by Brazil, Argentina and other Latin American countries. Venezuela did support resolutions addressing violations in Palestine and other occupied Arab areas.

The United States has received visits from 15 special rapporteurs since 2005. While we have repeatedly criticized its failure to allow UN rapporteurs to visit Guantanamo Bay and to access other prisoners being held in solitary confinement, we have seen that, on balance, the United States has played a constructive role at the Human Rights Council, along with other countries in the region such as Brazil, Chile, Mexico and Uruguay.

Finally, the petition claims we criticized the Syrian government’s use of missiles against civilians but “remained silent on the clear violation of international law constituted by the US threat of missile strikes on Syria in August.”

This may reflect a misunderstanding of Human Rights Watch’s mandate, which is to monitor governments’ adherence to international human rights and humanitarian law. We criticized Syrian missile strikes that were directed at populated areas, and thus violated the prohibition against indiscriminate attacks on civilians. But not all missile attacks violate the laws of war so we would not criticize as unlawful attacks yet to take place.

Were US missile strikes on Syria to violate international humanitarian law we would speak out, as we have done in cases ranging from Kosovo in the 1990s to Yemen most recently.

Human Rights Watch currently has 399 employees from 67 countries, as well as 34 board members and more than 200 members of advisory committees, among them activists, lawyers, journalists and academics. It is true that some served in the US government before or after their involvement with Human Rights Watch. We also have current and former staff, board, and advisory members who earlier served in the governments of Brazil, Canada, Germany, Mexico, Norway, Peru, Spain, South Africa, and the United Kingdom, among others, and in multilateral institutions.

We are careful to ensure that prior affiliations do not affect the impartiality of Human Rights Watch’s work. We do not allow active government officials to serve in the above capacities and we do not take funding from any government.

When we criticize governments and others, we are frequently accused of being in the pocket of their enemies. We would ask that you look at our work and judge whether these charges of bias are fair.

← The Limits of US Military Power
Ethnic Russians Are People, Too →

5 comments for “The Corruption of Human Rights Watch”