Exclusive: There’s an odor of prejudice in how the mainstream U.S. news media treats the ethnic Russians in eastern Ukraine, as if they are mindless beings, easily duped “minions” of Vladimir Putin. But this bias reflects more negatively on the U.S. press than on the people who are being insulted, writes Robert Parry.

So what does the New York Times have against Ukraine’s ethnic Russians? While the newspaper has fallen over itself insisting on the “legitimacy” of the coup regime in Kiev, despite its collaboration with neo-Nazis who spearheaded the Feb. 22 ouster of elected President Viktor Yanukovych, the Times editors can’t hurl enough insults at the ethnic Russians in the east who have resisted the regime’s authority.

For weeks, the Times has called the eastern Ukrainian rebel leaders “self-declared” and ridiculed the idea that there was any significant backing for the rejection of the Kiev-appointed regional leaders; all the trouble was simply stirred up by Vladimir Putin. Now, however, the referenda in the provinces of Donetsk and Luhansk have demonstrated what even a Times reporter acknowledged was “substantial popular support for the pro-Russian separatists in some areas.” 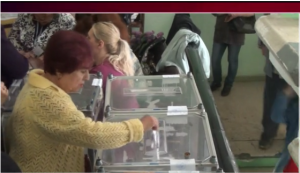 A Ukrainian woman voting in the May 11, 2014 referendum on independence for sections of eastern Ukraine. (Screen shot from RT video)

But the Times editors still won’t give up their prejudices. For instance, Tuesday’s lead editorial begins: “If there were questions about the legitimacy of the separatist referendums in eastern Ukraine, the farcical names of the entities on which people were asked to vote, the self-declared People’s Republics of Donetsk or Luhansk, surely answered them.”

So, the votes and the desires of eastern Ukrainians shouldn’t matter because the Times disapproves of “the farcical names of the entities” that people voted for.

The Times then suggests that violence that marred the referenda was the fault of the rebels, not the Kiev regime’s National Guard, which includes the neo-Nazi militias that threw fire bombs at police during the Maidan protests in February and are now carrying out the most lethal attacks against protesters in cities in the east and south.

Of course, according to the Times’ narrative, these neo-Nazis from western Ukraine don’t exist, so the violence must be palmed off on others or be treated like the natural occurrence of a spring thunderstorm. In Tuesday’s editorial, the Times wrote: “But the gathering rumble of violence accompanying the votes is serious and is driving the Ukrainian crisis in a direction that before long no one, not President Vladimir Putin of Russia, not authorities in Kiev, not the West, will be able to control.”

However, even the Times’ own field reporter noted that the violence during the referenda on Sunday was provoked by those new National Guard forces that attacked some polling places. The Times’ editors must assume that most of the newspaper’s readers aren’t paying close attention to the details.

The other part of the Times’ Ukraine narrative is that Putin provoked the unrest in Ukraine so he could seize territory, although no less an authority on power politics than former Secretary of State Henry Kissinger says that notion “isn’t possible,” adding that Putin simply was reacting to events that caught him off-guard as he was coming out of the Winter Olympics at Sochi.

Yet, the Times ignores this more realistic scenario of a Western-pushed destabilization of the Yanukovych government that involved demands that Ukraine accept a harsh austerity plan from the International Monetary Fund and that spiraled into a violent “regime change” and instead puts the blame on Putin, who the Times says must be told to get “his minions in southeastern Ukraine in line.”

Otherwise, the Times blusters “the European Union and the United States will impose sanctions that will cut Russia off for a long time from Western sources of technology, arms and finance.”

While the Times editorial accurately reflects the swaggering belligerence of Official Washington, the editors still refuse to see the Ukraine crisis in objective terms, in which both the western Ukrainians who favor closer ties with Europe and the eastern Ukrainians whose economy is dependent on trade with Russia have legitimate concerns.

The ethnic Russians in the east are not simply dupes who fall for clumsy propaganda and mindlessly follow the dictates of Vladimir Putin. They are human beings who have their own legitimate view of their political situation and who can make judgments about what course of action is best for their interests. As difficult as life in Ukraine is, it is sure to be worse once the IMF’s harsh austerity is imposed on the country’s population.

The Times and many others in the Western media insult these ethnic Russians with a disdainful treatment that treats them as lesser beings and assumes that only the pro-European Ukrainians in the west deserve respect for their opinions.

17 comments for “Ethnic Russians Are People, Too”