Exclusive: As Ukrainian soldiers from the coup regime in Kiev tighten the noose around anti-coup rebels in eastern Ukraine, the New York Times continues its cheerleading for the coup regime and its contempt for the rebels, raising grave questions about the Times’ credibility, writes Robert Parry.

For Americans interested in foreign policy, the New York Times has become the last U.S. newspaper to continue devoting substantial resources to covering the world. But the Times increasingly betrays its responsibility to deliver anything approaching honest journalism on overseas crises especially when Official Washington has a strong stake in the outcome.

The Times’ failures in the run-up to the disastrous Iraq War are, of course, well known, particularly the infamous “aluminum tube” story by Michael R. Gordon and Judith Miller. And, the Times has shown similar bias on the Syrian conflict, such as last year’s debunked Times’ “vector analysis” tracing a sarin-laden rocket back to a Syrian military base when the rocket had less than one-third the necessary range.

But the Times’ prejudice over the Ukraine crisis has reached new levels of extreme as the “newspaper of record” routinely carries water for the neocons and other hawks who still dominate the U.S. State Department. Everything that the Times writes about Ukraine is so polluted with propaganda that it requires a very strong filter, along with additives from more independent news sources, to get anything approaching an accurate understanding of events. 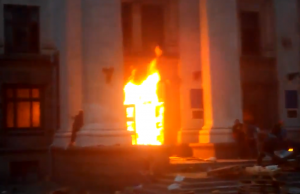 From the beginning of the crisis, the Times sided with the “pro-democracy” demonstrators in Kiev’s Maidan square as they sought to topple democratically elected President Viktor Yanukovych, who had rebuffed a set of Western demands that would have required Ukraine to swallow harsh austerity measures prescribed by the International Monetary Fund. Yanukovych opted for a more generous offer from Russia of a $15 billion loan with few strings attached.

Along with almost the entire U.S. mainstream media, the Times cheered on the violent overthrow of Yanukovych on Feb. 22 and downplayed the crucial role played by well-organized neo-Nazi militias that surged to the front of the Maidan protests in the final violent days. Then, with Yanukovych out and a new coup regime in, led by U.S. hand-picked Prime Minister Arseniy Yatsenyuk, the IMF austerity plan was promptly approved.

Since the early days of the coup, the Times has behaved as essentially a propaganda organ for the new regime in Kiev and for the State Department, pushing “themes” blaming Russia and President Vladimir Putin for the crisis. [For details, see Consortiumnews.com’s “Ukraine, Though the US ‘Looking Glass.’”]

In the Times’ haste to perform this function, there have been some notable journalistic embarrassments such as the Times’ front-page story  touting photographs that supposedly showed Russian special forces in Russia and then the same soldiers in eastern Ukraine, allegedly proving that the popular resistance to the coup regime was simply clumsily disguised Russian aggression.

Any serious journalist would have recognized the holes in the story since it wasn’t clear where the photos were taken or whether the blurry images were even the same people but that didn’t bother the Times, which led with the scoop. However, only two days later, the scoop blew up when it turned out that a key photo supposedly showing a group of soldiers in Russia who later appeared in eastern Ukraine was actually taken in Ukraine, destroying the premise of the entire story.

The Times, however, continued to soldier on with its bias, playing up stories that made Russia and the ethnic Russians of eastern Ukraine look bad and playing down anything that might make the post-coup regime in Kiev look bad.

On Saturday, for instance, the dominant story from Ukraine was the killing of more than 30 ethnic Russian protesters by fire and smoke inhalation in Ukraine’s southern port city of Odessa. They had taken refuge in a building after a clash with a pro-Kiev mob which reportedly included right-wing thugs.

Even the neocon-dominated Washington Post led its Saturday editions with the story of “Dozens killed in Ukraine fighting” and described the fatal incident this way: “Friday evening, a pro-Ukrainian mob attacked a camp where the pro-Russian supporters had pitched tents, forcing them to flee to a nearby government building, a witness said. The mob then threw gasoline bombs into the building. Police said 31 people were killed when they choked on smoke or jumped out of windows.

“Asked who had thrown the Molotov cocktails, pro-Ukrainian activist Diana Berg said, ‘Our people but now they are helping them [the survivors] escape the building.’”

By contrast, here is how the New York Times reported the event in its Saturday editions as part of a story by C.J. Chivers and Noah Sneider focused on the successes of the pro-coup armed forces in overrunning some eastern Ukrainian rebel positions.

“Violence also erupted Friday in the previously calmer port city of Odessa, on the Black Sea, where dozens of people died in a fire related to clashes that broke out between protesters holding a march for Ukrainian unity and pro-Russian activists. The fighting itself left four dead and 12 wounded, Ukraine’s Interior Ministry said. Ukrainian and Russian news media showed images of buildings and debris burning, fire bombs being thrown and men armed with pistols.”

Note how the Times evades placing any responsibility on the pro-coup mob for trying to burn the “pro-Russian activists” out of a building, an act that resulted in the highest single-day death toll since the actual coup which left more than 80 people dead from Feb. 20-22. From reading the Times, you wouldn’t know who had died in the building and who had set the fire.

Normally, I would simply attribute this deficient story to some reporters and editors having a bad day and not bothering to assemble relevant facts. However, when put in the context of the Times’ unrelenting bias in its coverage of the Ukraine crisis how the Times hypes every fact (and even non-facts) that reflect negatively on the anti-coup side you have to think that the Times is spinning its readers, again.

For those who write for the Times and the many more people who read it the question must be whether the Times is so committed to its prejudices here that the newspaper will risk whatever credibility it has left. The coup regime from Kiev may succeed in slaughtering many ethnic Russians in the rebellious east — as the Times signals its approval — but will this bloody offensive become a Waterloo for whatever’s left of the newspaper’s journalistic integrity?

24 comments for “Will Ukraine Be NYT’s Waterloo?”