Exclusive: The New York Times is at it again with a lead story citing grainy photos from the post-putsch regime in Kiev as proving that Russian special forces are behind the popular uprisings in eastern Ukraine, another slanted story coauthored by Michael Gordon, as Robert Parry reports.

There is now a pattern to New York Times “investigative” stories that seek to pin the blame on some nefarious foreign enemy, as in the 2002 article on Iraq buying aluminum tubes for nuclear centrifuges; the 2013 “vector analysis” tracing sarin-laden rockets to a Syrian military base; and now a photographic analysis proving that Russian soldiers are behind unrest in eastern Ukraine.

All these stories draw hard conclusions from very murky evidence while ignoring or brushing aside alternative explanations. They also pile up supportive acclamations for their conclusions from self-interested sources while treating any doubters as rubes. And, these three articles all involved reporter Michael R. Gordon. 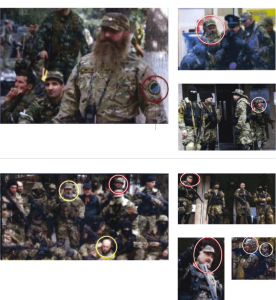 From the New York Times graphic package of photos in support of its article accusing Russia of sending special forces soldiers into eastern Ukraine.

The infamous aluminum tube story of Sept. 8, 2002, which Gordon co-wrote with Judith Miller, relied on U.S. intelligence sources and Iraqi defectors to frighten Americans with images of “mushroom clouds” if they didn’t support President George W. Bush’s invasion of Iraq. The timing played perfectly into the administration’s advertising “rollout” for the Iraq War.

Of course, the story turned out to be false and to have unfairly downplayed skeptics of the nuclear-centrifuge scenario. The aluminum tubes actually were meant for artillery, not for centrifuges. But the article provided a great impetus toward the Iraq War, which ended up killing nearly 4,500 U.S. soldiers and hundreds of thousands of Iraqis.

Gordon’s co-author, Judith Miller, became the only U.S. journalist known to have lost a job over the reckless and shoddy reporting that contributed to the Iraq disaster. For his part, Gordon continued serving as a respected Pentagon correspondent.

Gordon’s name also showed up in a supporting role on the Times’ botched “vector analysis” of Sept. 17, 2013, which nearly helped get the United States into another Mideast war, with Syria. That story traced the flight paths of two rockets, recovered in suburbs of Damascus after the Aug. 21 sarin gas attack, back to a Syrian military base 9.5 kilometers away.

The article became the “slam-dunk” evidence that the Syrian government was lying when it denied launching the sarin attack that killed several hundred people.

However, like the aluminum tube story, the Times’ ”vector analysis” also ignored contrary evidence, such as the unreliability of one azimuth from a rocket that landed in Moadamiya because it had struck a building in its descent. That rocket also was found to contain no sarin, so it’s inclusion in the vectoring of two sarin-laden rockets made no sense.

But the Times’ story ultimately fell apart when rocket scientists analyzed the one sarin-laden rocket that had landed in the Zamalka area and determined that it had a maximum range of about two kilometers, meaning that it could not have originated from the Syrian military base.

C.J. Chivers, one of the co-authors of the article, waited until Dec. 28 to publish a halfhearted semi-retraction. [See Consortiumnews.com’s “NYT Backs Off Its Syria-Sarin Analysis.”]

Now, the New York Times has led its Monday editions with an article supposedly proving that Russian military special forces are secretly directing the popular uprisings in eastern Ukraine in resistance to the Kiev regime, which took power after the violent overthrow of elected President Viktor Yanukovych on Feb. 22.

The Times based its story on grainy photographs provided by the Kiev regime supposedly showing the same armed “green men” involved in actions with the Russian military earlier and now with the pro-Russian protesters who have seized government buildings in towns in eastern Ukraine.

The Times reported, “Now, photographs and descriptions from eastern Ukraine endorsed by the Obama administration on Sunday suggest that many of the green men are indeed Russian military and intelligence forces, equipped in the same fashion as Russian special operations troops involved in annexing the Crimea region in February. Some of the men photographed in Ukraine have been identified in other photos clearly taken among Russian troops in other settings.”

The Times apparently accepts the photos as legitimate in terms of where and when they were taken, but that requires first trusting the source, the post-coup regime in Kiev which has a strong motive for making this argument as a prelude to violently crushing the eastern Ukrainian protests.

Secondly, one has to believe that the fuzzy photographs of the circled faces are the same individuals. They may be, but it is difficult to be sure from what is displayed. The principal figure shown is a man with a long beard and a cap sometimes pulled down over his forehead. He could be a Russian special forces soldier or a character from “Duck Dynasty.”

And the resemblance of some uniforms to those worn by Russian soldiers is also circumstantial, since military gear often looks similar or it could have been sold to civilians, or the men could be veterans who kept their old uniforms after leaving the military. The fact that these men are adept at handling weapons also could mean that they have prior military experience, not that they are still active.

For the Times to cite the Obama administration’s endorsement of the Kiev regime’s claims as some kind of verification is also silly. Anyone who has followed the Ukraine crisis knows that the U.S. government is wholeheartedly on the side of the post-coup regime, trumpeting its propaganda and dismissing any counterclaims from the Yanukovych camp or from Moscow.

There’s other silliness in the Times article, such as the notion that the Russians are unusual in “masking” their special forces when U.S. military and intelligence services have been doing the same for decades. In contradicting Russian denials that the Kremlin has dispatched undercover soldiers, the Times wrote:

“But masking the identity of its forces, and clouding the possibilities for international denunciation, is a central part of the Russian strategy, developed over years of conflict in the former Soviet sphere, Ukrainian and American officials say.”

Is it possible that the Times’ reporters, including Pentagon correspondent Gordon, don’t know that U.S. Special Forces and CIA officers routinely grow beards and wear local garb to blend in when they are operating in places like Afghanistan, Iraq, Central America, etc.?

When I was covering Central America policy in the 1980s, I knew American mercenaries, including former U.S. Special Forces soldiers, who provided training and other assistance to the region’s security forces. Sometimes, these veterans coordinated their actions with the U.S. government and sometimes they were simply making money.

More recently, there have been the various permutations of Blackwater, a private security firm that employs former U.S. military personnel and makes them available to governments around the world, sometimes in support of American interests but sometimes not.

All these are factors that should be considered when making claims about whether military men who show up in Kiev or eastern Ukraine or anywhere else are on assignment for a specific government or are working for a local “oligarch” or are simply inspired by nationalism. But these nuances are missing from the Times story as it jumps to its preferred conclusion.

Plus, you have to wonder how skillful the Russians really are at “masking” if they have their special forces troops wear uniforms that can be so easily traced back to Russia.

That is not to say that these “green men” might not be Russian special forces. I have one longtime source who is convinced that they are Russian soldiers (though he has not seen any proof), and another source who insists that the Russian government did not want the uprisings in eastern Ukraine and did not dispatch these men.

But the Times should have learned from its previous blunders and taken care to include alternative scenarios or point to evidentiary holes in what the Kiev regime claimed. Instead, the Times has again acted like a prosecutor determined to make a case, not a fair-minded judge weighing the evidence.

It is also an indictment of the Times’ professionalism that this newspaper of record can’t seem to detect neo-Nazis in the post-coup regime, when some have open histories of pro-Nazi behavior, while it goes to dubious lengths to discredit the eastern Ukrainians who are resisting the imposition of authority from an unelected administration in Kiev.

Just like the “aluminum tube” story that justified killing so many Iraqis and the “vector analysis” that almost unleashed a devastating U.S. bombing campaign on Syria, the Times’ “green men” piece may be the prelude to a bloodbath in eastern Ukraine. [For more on the U.S. propaganda, see “Ukraine. Through the US ‘Looking Glass.’”]

11 comments for “Another NYT-Michael Gordon Special?”