Despite South Africa’s transition into a multiracial democracy, profound economic inequality remains, a backdrop to both the high-profile murder trial of athlete Oscar Pistorius and the splintering of Nelson Mandela’s ANC, as Danny Schechter notes.

With Nelson Mandela’s death, news from South Africa seemed to have died along with the world’s most famous ex-political-prisoner-turned-president. It was as if the people there don’t deserve to be covered unless there is a larger-than-life celebrity or scandal to focus on.

Happily for the media industry there is a now an anti-Mandela in the public eye, an athletic celebrity who is now less famous for his achievements than infamous for killing his girlfriend in what was either a tragic accident or the act of an angry lover.

Oscar Pistorius’s trial is getting far more coverage than the one that Mandela and his co-defendants went through in 1962 leading to his life sentence for acts of sabotage against South Africa’s white-supremacist government.

That’s partly because of today’s celebrity culture. Pistorius was a medal-winning athlete dubbed the “blade runner” because he had been a double amputee since childhood and overcame adversity to win races while wearing prosthetic devices. His late live-in lover, Reeva Steenkamp, was a stunning blonde model well known to local media.

This story is being given the full tabloid treatment with cover stories in People Magazine and lots of hype by the networks. Unlike the days of apartheid, a black judge is hearing this case with race rarely alluded to, although it is part of the back story because of Pistorius’s claims that he thought he was shooting at an intruder. 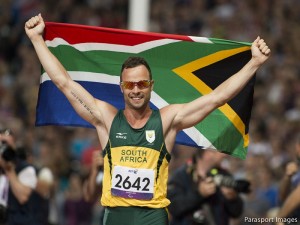 Pistorius lived in a pricey gated community where fear of black burglars is legion, all an unstated reflection of the dramatic inequality that remains in the country. If Pistorius had killed an unknown black intruder, instead of his celebrity paramour, this trial wouldn’t be news (if there would even be a trial).

The coverage of him has been mostly negative although he has fought back with his own communications team with a Twitter feed, @OscarHardTruth, designed to give “factual updates” on the trial. Its profile reads, “Truth Shall Prevail. Innocent until Proven Guilty.” http://www.oscarpistorius.com. In just 24 hours, it had over 16,400 followers, but only follows 28 mostly international media outlets.

South Africa’s media monitor, Media Tenor, said the local media is trying him as well as the court. According to researcher, Minnette Nieuwoudt, “my instinct tells me the media likes a damsel-in-distress type of story. The outright victim is something that resonates with a lot of people. The fact that she was very beautiful, it made her a bit of an icon. Pistorius, on the other hand, started getting increasingly negative coverage over the months after the shooting.

“There seemed to be a slight change in the tonality. Also, with regards to Oscar, he was initially compared to fallen sport heroes, then this changed to a more the general criminal comparison. First, he was an athlete who stumbled. Now, he’s a criminal, who used to be an athlete.”

But even as the world focuses on his courtroom tears and the aggressive and often bungled prosecution that aims to show the dark side of this Olympic hero, other issues of perhaps worst crimes in South Africa draw little interest from the global media machine.

The year 2014 is the 20th anniversary of South Africa’s “freedom” and the coming of democracy. It is an election year with national campaign underway pitting President Jacob Zuma, who was once part of the African National Congress’s armed struggle and is now a popular if controversial/detested politician seeking reelection, against a number of challengers.

Zuma is carrying lots of baggage because of a current theft-of-public-monies-for-private-use scandal involving lavish improvements on his home compound and an earlier rape case.

The ANC has a serious political challenge as well. On the center-right, there’s the DA, the Democratic Alliance, now transitioning from its roots in all-white politics into a multi-racial party that holds power in the Western Cape Province with Cape Town as its capital.

And, then there are two new outfits, among other players, contesting for seats in this parliamentary democracy. Businesswoman and educator Mamphela Ramphele, best known as the anti-apartheid icon Steve Biko’s girl friend, and her Agang Party is focusing on corruption and attracting women, while former ANC Youth League Leader Julius Malema has set up a militant radical sounding youth-oriented party, the Economic Freedom Fighters, and says the ANC died with Mandela.

South Africa’s powerful labor unions that have been in an alliance with the ANC for decades were expected to organize a worker’s party but they have been persuaded not to. None of these political divisions fall on strict left-right differences.

Many on all sides have strong disagreements with the ANC’s neo-liberal economic policies and complain about pervasive poverty and low growth. Outside the traditional political party structure, dissent is heard daily in noisy press stories exposing corruption and the “politics of concealment” by the ruling ANC party.

Long-time activists and ANC members are incensed by the lack of transparency and the arrogance of a political elite that seems more focused on enriching itself than serving the public.

Now, a former minister, Ronnie Kasrils, and supporters have launched a new Vote No campaign to put the issues of the ANC’s betrayal and corruption on the agenda. They have just issued this release:

“A one-time minister and a deputy minister in ANC governments are among a group of former anti-apartheid activists who are backing a campaign calling on voters to come out and vote by either spoiling their ballots or to voting tactically in protest against corruption and current government policies.

“Former intelligence minister Ronnie Kasrils and former deputy health minister Nozizwe Madlala-Routledge are among a number of prominent figures who have endorsed a statement headed:  Sidikiwe! (We are fed up) Vukani! (Arise/Wake up), Vote ‘NO’ that will be released at the Press conference.”

It criticizes the economic policies of both the ANC and the main opposition, the DA, for supporting a system that has caused such alienation. Many participants are veterans of the struggle against apartheid and most of the signatories have supported the ANC throughout the years since the 1994 transition, but are appealing to the wider range of disillusioned voters. Their statement concludes:

“The ANC needs to know that it can no longer take for granted its traditional support and we would be failing South Africa and our democracy by not voting. After the elections efforts will be intensified to build an inclusive and transformative political program premised on social justice, redistribution, clean governance and democratic principles.”

All of this textured opposition politics does not meet the celebrity smell test that seems to motivate international media to pay attention. Corruption stories in Africa are widely covered although the focus is rarely ever on the corruptor, just the corruptee. It is virtually never on the disastrous impact of western corporations, banks and international financial institutions.

Years ago the anti-government song “Marching on Pretoria” was well-known. Today, with the media “marching on Pistorius,” the deeper, critical issues of a deepening economic and political crisis have been supplanted by another distraction what looks to all the world like another OJ Simpson trial for audiences relishing more “newstainment.”

News Dissector Danny Schechter edits Mediachannel.org and blogs at newsdissector.net. His latest book is Madiba AtoZ: The Many Faces of Nelson Mandela (Madibabook.com). Comments to dissector@mediachannel.org