Exclusive: President Lyndon Johnson’s legacy is in the news whether his many domestic achievements should outweigh his disastrous escalation of the Vietnam War but no attention is being paid to evidence that LBJ might have ended the war if not for Richard Nixon’s sabotage, writes Robert Parry.

Many important officials and journalists have spent time at the LBJ Library in Austin, Texas, this past week celebrating the half-century anniversary of one of President Lyndon Johnson’s signature achievements, the Civil Rights Act. But no one, it seems, took time to look at what the library’s archivists call their “X-File,” documents that could change how history views Johnson’s legacy.

The “X-File” is the nickname that the archivists gave to Johnson’s secret file on what he considered Richard Nixon’s “treason” in sabotaging Vietnam War peace talks to gain an edge over Hubert Humphrey in the close 1968 election. The “X-File” is actually “The X envelope,” the words scribbled on the outside by Johnson’s national security adviser Walt Rostow. 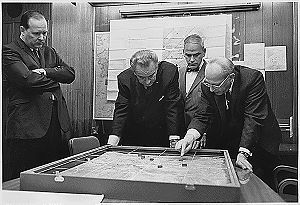 As a bitter Johnson was leaving the White House in January 1969, he ordered Rostow to take the top-secret file which included national security wiretaps of Nixon’s representatives urging South Vietnamese officials to boycott Johnson’s Paris peace talks and offering a better deal if Nixon won.

Johnson had hoped he could bring the war to a close before his presidency ended, but in late October 1968, South Vietnamese President Nguyen van Thieu balked at the peace talks as the Nixon team had requested. The failed negotiations gave a last-minute lift to Nixon who eked out a narrow victory over Humphrey.

Johnson chose to keep silent about what Nixon’s had done but wanted to keep the file out of Nixon’s hands. So LBJ entrusted it to Rostow who simply took the file home with him and kept it, as instructed, until after Johnson’s death on Jan. 22, 1973. For several months, Rostow struggled over what to do with the file before finally entrusting it to the LBJ Library with instructions to keep it secret for 50 years.

However, in 1994, library officials decided to open the file and began the work of declassifying the documents, a few of which remain classified to this day. I was given access to the file in 2012 and published a lengthy story at Consortiumnews.com. I also included the information in my latest book, America’s Stolen Narrative. After my reporting, the BBC published an account in 2013 recognizing the significance of the new evidence.

“The X-envelope” also played a role in two other controversies of the Nixon years: the Pentagon Papers and Watergate, offering insights into how the two events were tied together. The narrative goes this way:

After taking office in 1969, Nixon learned about LBJ’s wiretap file from FBI Director J. Edgar Hoover, but Nixon’s top aides, Henry Kissinger and H.R. “Bob” Haldeman, could not locate it. They had no idea that Rostow had taken the file home with him when he left the White House at the end of LBJ’s presidency.

Nixon’s concerns about the missing file became more urgent in June 1971 when the New York Times began publishing the Pentagon Papers, a secret history of the Vietnam War that had been leaked by former Pentagon official Daniel Ellsberg. The Pentagon Papers chronicled many of the deceptions that had led the United States into the bloody Vietnam conflict, but the historical chronology stopped in 1967.

As the Pentagon Papers dominated the U.S. news in mid-June 1971, Nixon understood something that few others did that there was a sequel somewhere that could have been even more explosive than the Pentagon Papers, the story of how Nixon’s 1968 presidential campaign had conspired with South Vietnamese officials to extend the war. 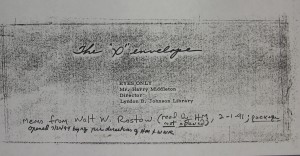 If Rostow’s “X envelope” had surfaced then, Nixon’s reelection would not only have been put in jeopardy but he might well have faced impeachment. Just a month earlier, the May Day protests had brought hundreds of thousands of anti-war activists to Washington, government buildings had been surrounded, and thousands of people were arrested. It is hard to even imagine the fury that would have followed disclosure that Nixon had torpedoed peace talks for political gain.

With the May Day protests fresh in his mind and confronting the media frenzy over the Pentagon Papers, Nixon ordered Kissinger and Haldeman to resume their search for the missing file. In a tape-recorded conversation on June 17, 1971, Nixon even instructed his people to break into the Brookings Institution where he thought the file might be.

On June 30, 1971, Nixon returned to the topic, suggesting that ex-CIA officer E. Howard Hunt be brought in to put together a team to handle the job. “You talk to Hunt,” Nixon told Haldeman. “I want the break-in. Hell, they do that. You’re to break into the place, rifle the files, and bring them in. Just go in and take it. Go in around 8:00 or 9:00 o’clock.”

Haldeman: “Make an inspection of the safe.”

Nixon: “That’s right. You go in to inspect the safe. I mean, clean it up.”

For reasons that remain unclear, it appears that the planned Brookings break-in never took place, but Hunt did put together a team of burglars who conducted other operations, including breaking into the Democratic National Headquarters at the Watergate building where part of the team was captured on June 17, 1972. [See Consortiumnews.com’s “The Dark Continuum of Watergate.”]

Though Rostow’s “X envelope” contains information that could dramatically reshape history’s understanding of both the Johnson and Nixon presidencies, it continues to attract very little attention even when groups of very important people visit the LBJ Library seeking to put President Johnson’s legacy in clearer focus.

Despite the visit by President Barack Obama and the traveling press corps on Thursday, Rostow’s documents still remain as mysterious as the spooky “X-Files” series that the archivists were referencing when they dubbed the papers their “X-File.” On Friday, when I ran a Google news search for “Johnson, Nixon, Rostow, Vietnam War,” nothing came up.