As the Ukraine crisis continues to deepen, the mainstream U.S. news media is sinking to new lows of propaganda and incompetence. Somehow, a violent neo-Nazi-spearheaded putsch overthrowing a democratically elected president was refashioned into a “legitimate” regime, then the “interim” government and now simply “Ukraine.”

The Washington Post’s screaming headline on Sunday is “Ukraine decries Russian ‘invasion,’” treating the coup regime in Kiev as if it speaks for the entire country when it clearly speaks for only a subset of the population, mostly from western Ukraine. The regime’s “legitimacy” comes not from a democratic election but from a coup that was quickly embraced by the U.S. government and the European Union. 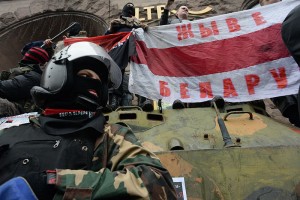 Right Sektor activists in the Maidan square in Kiev, Ukraine, on Feb. 22, 2014, the day of the coup. (Photo credit: Mstyslav Chernov/Unframe/http://www.unframe.com/)

Objective U.S. journalists would insist on a truthful narrative that conveys these nuances to the American people, not simply behave as clumsy propagandists determined to glue “white hats” on the side favored by the State Department and “black hats” on everyone that the U.S. government disdains. But virtually the entire mainstream press corps has opted for the propaganda role, much as it has in the past. Think Iraq 2002-03.

You also might remember the mainstream media’s rush to judgment over the Sarin attack in Syria on Aug. 21, 2013. The State Department rashly blamed the incident on the Syrian government despite serious doubts inside the U.S. intelligence community.

To conceal those dissents, the State Department and the White House issued a four-page “Government Assessment,” rather than a National Intelligence Estimate from the 16 U.S. intelligence agencies. That would have had to include footnotes revealing disagreements over the evidence among the analysts.

When the “Government Assessment” was posted online at the White House Web site on Aug. 30, it contained not a single piece of evidence that could be independently checked. That same day, Secretary of State John Kerry gave a nearly hysterical speech that sounded like a declaration of war. He insisted that the U.S. government had conclusive proof of the Syrian government’s guilt but he just couldn’t reveal any.

The U.S. press corps showed virtually no skepticism about the U.S. government’s case. Only a few Web sites, including Consortiumnews.com, noted the lack of verifiable proof and the absence of U.S. intelligence officials during the presentations, including none sitting behind Kerry when he made the rounds of congressional hearings.

The evidence regarding the Syrian government guilt apparently was so flimsy that no U.S. intelligence official wanted to play the role of CIA Director George Tenet who popped up behind Secretary of State Colin Powell during his deceptive speech on Feb. 5, 2003, asserting a definitive case that Iraq was hiding weapons of mass destruction.

But the dog-not-barking in the missing intelligence officials on Syria was ignored by the big media. Instead, the New York Times, the Washington Post and other major news outlets reprised their Iraq War roles.

In September, the Times even fronted a story by C.J. Chivers and Rick Gladstone asserting that it had established Syrian government guilt for the Sarin attack, much as a 2002 Times story reported that Iraq’s purchase of aluminum tubes was proof of a secret nuclear program. That Times story became the basis for President George W. Bush and his top aides scaring the American people with warnings about “mushroom clouds.”

The Chivers-Gladstone story cited the azimuths (or the reverse flight paths) of two Sarin-laden rockets intersecting at a Syrian military base northwest of Damascus, the “slam-dunk” proof of Syrian guilt, making those of us who raised questions about lack of evidence look stupid.

But both Times stories the one in 2002 and the one in 2013 collapsed under scrutiny. The Iraqi aluminum tubes, it turned out, were unfit for nuclear centrifuges (and the U.S. invasion force later determined that Iraq had no active nuclear program), and the intersecting azimuths proved false because only one of the two rockets contained Sarin and its maximum range was around 2.5 kilometers, according to scientific analyses, not the necessary 9.5 kilometers for the two azimuths to cross.

So, in December 2013, three months after the Times ran its front-page “vector analysis,” Chivers got the assignment to write a grudging retraction, though the admission of his error was mumbled in the 18th paragraph of a story stuck deep inside the newspaper. [See Consortiumnews.com’s “NYT Backs Off Its Syria-Sarin Analysis.”]

Because the retraction was “buried,” however, much of Official Washington still thinks the earlier story, supposedly proving the Syrian government’s guilt, is operational. That’s why you see politicians, like Sen. John McCain, accusing President Barack Obama of cowardice for failing to bomb Syria after it crossed his “red line” against using chemical weapons.

You’ve had a similar rush to judgment in connection with the violence that broke out in Kiev last month. The U.S. government and news media blamed lethal sniper fire on the government of President Viktor Yanukovych and after he was driven from office by a neo-Nazi-led putsch on Feb. 22 the U.S. media made much of how the new rump regime in Kiev had accused Yanukovych of mass murder.

However, according to an intercepted phone conversation between Estonia’s Foreign Minister Urmas Paet and European Union foreign affairs chief Catherine Ashton, Paet reported on a conversation that he had with a doctor in Kiev who said the sniper fire that killed protesters was the same that killed police officers.

As reported by the UK Guardian, “During the conversation, Paet quoted a woman named Olga who the Russian media identified her as Olga Bogomolets, a doctor blaming snipers from the opposition shooting the protesters.”

Paet said, “What was quite disturbing, this same Olga told that, well, all the evidence shows that people who were killed by snipers from both sides, among policemen and people from the streets, that they were the same snipers killing people from both sides.

“So she also showed me some photos, she said that as medical doctor, she can say it is the same handwriting, the same type of bullets, and it’s really disturbing that now the new coalition, that they don’t want to investigate what exactly happened. So there is a stronger and stronger understanding that behind snipers it was not Yanukovych, it was somebody from the new coalition.”

Ashton replied: “I think we do want to investigate. I didn’t pick that up, that’s interesting. Gosh.”

This important evidence regarding who was responsible for the crucial sniper fire, which sparked the violent coup, has been virtually blacked out of the mainstream U.S. news media, along with the sudden disinterest on the part of the coup regime to investigate who committed those murders. Yet, instead of repairing the rotting foundation of Official Washington’s false narrative, the major news organizations just keep building upon it.

Whiting Out the Brown Shirts

The next step is to white-out the brown shirts of the neo-Nazi storm troopers who led the final violent overthrow of Yanukovych. Then, you clean up the unsavory coup regime by having its U.S.-chosen leader, Prime Minister Arseniy Yatsenyuk, receive a formal welcome at the White House. Next, you pretend that the concerns of the ethnic Russians in Ukraine’s east and south are simply the result of Moscow’s propaganda and intimidation.

That’s what we’re seeing now. The New York Times even dispatched correspondent C.J. Chivers, the same guy who falsely fingered the Syrian government with that “vector analysis” last September, to co-author a dispatch entitled “Pressure and Intimidation Grip Crimea,” with the subtitle, “Russia Moves Swiftly to Stifle Dissent Ahead of Secession Vote.”

Chivers and co-author Patrick Reevel wrote: “With a mix of targeted intimidation, an expansive military occupation by unmistakably elite Russian units and many of the trappings of the election-season carnivals that have long accompanied rigged ballots across the old Soviet world, Crimea has been swept almost instantaneously into the Kremlin’s fold.

“This has happened well ahead of the referendum set for Sunday, after which, barring an extraordinary surprise, the peninsula’s interim authorities, led by a previously unsuccessful politician nicknamed the Goblin, will announce that its citizens have voted to leave Ukraine and seek a place in President Vladimir V. Putin’s Russia.”

You get the picture? While the New York Times accepted the rump parliament’s actions in Kiev last month as “legitimate” voting in lock step under the watchful of eye of neo-Nazi militias to depose Yanukovych and strip away rights of ethnic Russians a different standard will apply to Crimea’s referendum on bailing out of the failed Ukrainian state.

That vote, if it favors secession, must be seen as rigged and resulting only from Russian coercion, all the better to continue the false narrative that now dominates the U.S. political/media process.

Yet, the danger of false narratives as the American people saw in Iraq and almost revisited in Syria is that policies, including warfare, can be driven by myth, not by fact. The real story of Ukraine is far more complex than the black-and-white caricature that the New York Times, the Washington Post and others are presenting. It is in the truthful grays that responsible policies are shaped and bloody miscalculations are avoided.

[For more of Consortiumnews.com’s exclusive coverage of the Ukraine crisis, see “Can Obama Speak Strongly for Peace?”; “Neocons Have Weathered the Storm”; “Crimea’s Case for Leaving Ukraine”; “The ‘We-Hate-Putin’ Group Think”; “Putin or Kerry: Who’s Delusional?”; “America’s Staggering Hypocrisy”; “What Neocons Want from Ukraine Crisis”; “Ukraine: One ‘Regime Change’ Too Many?”; “A Shadow US Foreign Policy”; “Cheering a ‘Democratic’ Coup in Ukraine”; “Neocons and the Ukraine Coup.”]

25 comments for “Mainstream US Media Is Lost in Ukraine”