Exclusive: The mainstream U.S. news media has so fully bought into the U.S. government’s narrative on Ukraine that almost no one sees the layers of hypocrisy, an achievement in “group think” that dates back to Ronald Reagan’s war against “moral equivalence,” writes Robert Parry.

Official Washington’s hearty disdain for anyone who cites U.S. hypocrisy toward the Ukraine crisis can be traced back to a propaganda strategy hatched by the Reagan administration in 1984, dismissing any comparisons between U.S. and Soviet behavior as unacceptable expressions of “moral equivalence.”

This “moral equivalence” concern stemmed, in part, from the prior decade’s disclosures of U.S. government misconduct — the Vietnam War, CIA-sponsored coups and other intelligence abuses at home and abroad. In that climate of heightened skepticism, U.S. journalists felt it was their job to show some skepticism and hold U.S. officials accountable for their behavior. 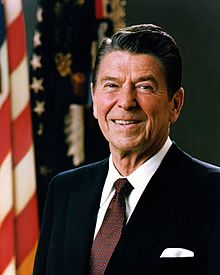 For President Ronald Reagan, that meant journalists taking note of his administration’s support for terrorism by the Contra rebels in Nicaragua and for death-squad-tainted governments slaughtering civilians in countries such as Guatemala and El Salvador.

So, to counter this P.R. problem, Reagan administration officials developed a propaganda “theme” that, in effect, asserted that the U.S. government should not be held to the same human rights standards as the Soviet government because the United States was morally superior to the Soviet Union.

According to documents recently released by the Reagan Presidential Library in Simi Valley, California, the Reagan administration established a “Moral Equivalence Working Group” in 1984 reporting to Walter Raymond Jr., who had been a top psychological warfare specialist at the CIA before being moved to Reagan’s National Security Council where he oversaw a wide-ranging program of domestic and foreign propaganda.

Though the working group’s core complaint was something of a straw man, since it would be hard to find anyone who equated the U.S. and USSR, the Reagan administration made clear that anyone who continued to apply common moral standards to the two governments would be accused of “moral equivalence.”

This framing proved effective in tarring U.S. journalists and human rights activists as, in essence, Soviet apologists. The “theme” was most famously expressed by U.S. Ambassador to the United Nations Jeane Kirkpatrick at the Republican National Convention in 1984 when she decried anyone who would “blame America first.”

Link to the Present

As an Associated Press reporter, I encountered this “moral equivalence” attack line when I questioned State Department officials about their hypocrisy in applying strict human rights standards to Nicaragua’s Sandinista government while excusing far more serious abuses by the Contras and other U.S. allies in Central America.

Neocon intellectual Robert Kagan, who then was a senior official in the State Department’s Office of Public Diplomacy for Latin America, warned me that I was edging dangerously close to the line on “moral equivalence.”

Ironically, Kagan’s wife, Assistant Secretary of State for European Affairs Victoria Nuland, is now at the forefront of U.S. support for the Ukrainian coup, which relied on neo-Nazi militias to overthrow a democratically elected president, though the official U.S. narrative is that this was a “democratic” uprising. [See Consortiumnews.com’s “Neocons and the Ukraine Coup.”]

Over the past three decades, the argument against “moral equivalence” has changed little, though it has morphed into what is now more commonly described as American “exceptionalism,” the new trump card against anyone who suggests that the U.S. government should abide by international law and be held to common human rights standards.

Today, if you make the case that universal rules should apply to the United States, you are accused of not embracing America as an “exceptional” country. As a result, very few mainstream observers in Official Washington even blink now at the U.S. government taking contradictory positions on issues such as intervening in other countries.

Invasions of Iraq and Afghanistan are “justified” as are drone strikes and aerial bombardments of countries from Pakistan to Yemen to Somalia to Libya. It’s also okay to threaten to bomb Syria and Iran.

Supporting the overthrow of sovereign governments is also fine for the United States but not for anyone else. Just during the Obama administration, the U.S. government has backed coups in Honduras, Libya and now Ukraine. U.S.-endorsed secessions are okay, too, as with oil-rich South Sudan from Sudan.

Yet, when the geopolitical shoe is on the other foot when Russia objects to the violent overthrow of Ukraine’s duly-elected President Viktor Yanukovych and, as a result, supports a secession referendum by Crimea on whether its citizens want to join the Russian Federation Official Washington cries out in moral outrage.

Suddenly, we see mainstream American journalists searching for some clause in Ukraine’s constitution that prohibits secession, though these journalists had no problem with the violation of the same constitution’s procedures for impeaching a president, rules ignored by the coup regime with barely a peep from U.S. news outlets.

This ever-shifting moral playing field was defined by the Reagan administration’s propagandists in the mid-1980s, coincidentally in the iconic year 1984, according to documents at the Reagan Library. I found in Raymond’s files a “concept paper” for a conference to address “moral equivalence,” attached to a memo dated Sept. 4, 1984. The paper read:

“The Moral Equivalence Working Group has for some time been examining ways to counter the common (and for US, very damaging) concept of the ‘moral equivalence of the superpowers,’ i.e., the notion that there is no moral distinction to be made between the US and the USSR, particularly in the areas of foreign and military policy. Moral equivalence is a particularly insidious problem because it permeates almost every level of public discourse both at home and abroad.”

The “concept paper” offers no specific examples of anyone actually engaging in this “moral equivalence,” but it insists that the problem is widespread among elites and could be detected when people, for instance, compared the U.S. invasion of Grenada to the Soviet invasion of Afghanistan. The paper reads:

“This is not to suggest that moral equivalence is in fact a majority perception. There is reason to believe that it is primarily an elite problem and that the broad mass of people has a sounder instinct on the inherent moral differences between the US and Soviet systems. However, given the dominance of morally equivalent thinking among elites, particularly in the media and in academia, public resistance to moral equivalence is provided with little informational or intellectual support.”

The paper then proposes a high-level conference sponsored by the neoconservative Center for Strategic and International Studies with the goal of analyzing “the Moral Equivalence misconception” and devising ways “to combat the problem” including addressing “intellectual fashion and ways to have an impact on it.”

Over the intervening three decades, these U.S. government’s propaganda efforts against holding the United States to the same moral standards as other countries have proved remarkably successful, at least within U.S. opinion circles.

It is now common for mainstream journalists to accept the principle of “American exceptionalism” in both implications of the word: that the United States is a wonderfully exceptional nation and that it is exempted from international law.

Indeed, it is rare for anyone in mainstream journalism to assert that the United States should conform to international law, i.e. respecting the sovereign borders of other countries. Yet, the same opinion leaders express outrage when Russia intervenes in Ukraine in the wake of a neo-Nazi-spearheaded coup on Russia’s border.

No longer do mainstream U.S. journalists and academics try to apply the same rules to Washington and Moscow. The “problem” that Reagan’s team detected in the 1980s has been solved. Today, American hypocrisy is the accepted “group think.”

[For more of Consortiumnews.com’s exclusive coverage of the Ukraine crisis, see “Crimea’s Case for Leaving Ukraine,” “The ‘We-Hate-Putin’ Group Think”; “Putin or Kerry: Who’s Delusional?”; “America’s Staggering Hypocrisy”; “What Neocons Want from Ukraine Crisis”; “Ukraine: One ‘Regime Change’ Too Many?”; “A Shadow US Foreign Policy”; “Cheering a ‘Democratic’ Coup in Ukraine”; “Neocons and the Ukraine Coup.”]

26 comments for “How Reagan Enforced US Hypocrisy”