Exclusive: Official Washington and its compliant mainstream news media operate with a convenient situational ethics when it comes to the principles of international law and non-intervention in sovereign states. The rules apply only when they’re convenient, explains Robert Parry.

When Secretary of State John Kerry denounces Russia’s intervention in Crimea by declaring “It is not appropriate to invade a country and at the end of a barrel of gun dictate what you are trying to achieve. That is not Twenty-first Century, G-8, major-nation behavior,” you might expect that the next line in a serious newspaper would note Kerry’s breathtaking hypocrisy.

But not if you were reading the New York Times on Wednesday, or for that matter the Washington Post or virtually any mainstream U.S. newspaper or watching a broadcast outlet.

Yet, look what happens when Russia’s President Vladimir Putin does what the U.S. news media should do, i.e. point out that “It’s necessary to recall the actions of the United States in Afghanistan, in Iraq, in Libya, where they acted either without any sanction from the U.N. Security Council or distorted the content of these resolutions, as it happened in Libya. There, as you know, only the right to create a no-fly zone for government aircraft was authorized, and it all ended in the bombing and participation of special forces in group operations.” 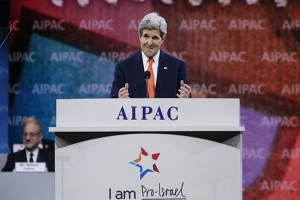 Despite the undeniable accuracy of Putin’s observation, he was promptly deemed to have “lost touch with reality,” according to a Washington Post’s editorial, which called his press conference “rambling” and a “bizarre performance” in which his words have “become indistinguishable from the propaganda of his state television network.”

You get the point. If someone notes the disturbing U.S. history of military interventions or describes the troubling narrative behind the “democratic” coup in Ukraine spearheaded by neo-Nazi militias who overthrew a duly elected president you are dismissed as crazy.

Yet, it has been the Post, Times and other U.S. news outlets which have led the way in developing a propaganda narrative at odds with the known reality. For instance, the violent February clashes in Kiev are now typically described as the Ukrainian police having killed some 80 protesters, though the original reporting had that death toll including 13 policemen and the fact that neo-Nazi militias were responsible for much of the violence, from hurling firebombs to shooting firearms.

That history is already fast disappearing as we saw in a typical New York Times report on Wednesday, which reported: “More than 80 protesters were shot to death by the police as an uprising spiraled out of control in mid-February.”

Those revised “facts” better fit the preferred narrative of innocent and peaceful demonstrators being set upon by thuggish police without provocation. But that isn’t what the original reporting revealed. Either the New York Times should explain how the earlier reporting was wrong or it should respect the more nuanced reality.

To do so, however, would undercut the desired narrative. So, it’s better to simply accuse anyone with a functioning memory of being “delusional.” The same with anyone who mentions the stunning hypocrisy of the U.S. government suddenly finding international law inviolable.

The history of the United States crossing borders to overthrow governments or to seize resources is a long and sordid one. Even after World War II and the establishment of the Nuremberg principles against “aggressive war,” the U.S. government has routinely violated those rules, sometimes unilaterally and sometimes by distorting the clear meaning of U.N. resolutions, as Putin noted.

Those violations of international law have done nothing to diminish the official reputations of presidents who broke the rules. Despite the slaughters of millions of people from these U.S. military adventures, no U.S. president has ever been punished either by U.S. judicial authorities or by international tribunals.

In 1983, President Ronald Reagan, one of the most honored political figures in modern American history, ordered the invasion of the tiny Caribbean island of Grenada to overthrow its leftist government amid a political crisis that U.S. hostility had helped stir up. Reagan’s pretext was to protect American students at the St. George’s Medical School, though the students were not in any physical danger.

The U.S. invasion killed some 70 people on the island, including 25 Cuban construction workers. Nineteen U.S. soldiers also died. Though Reagan’s clear violation of international law was noted around the globe, he was hailed as a hero by the U.S. media at home and faced no accountability from the United Nations or anyone else.

When I went to Grenada to report on the invasion for the Associated Press, an article that I co-wrote about abuses committed by American troops, including the ransacking of the personal libraries of prominent Grenadians (in search of books such as Karl Marx’s Das Kapital), was spiked by my AP editors, presumably because it clashed with the feel-good U.S. public reaction to the invasion.

Last week, as I was reviewing documents at the Reagan Presidential Library at Simi Valley, California, I found a number of papers about how the Reagan administration used propaganda techniques to manipulate the American people regarding Grenada.

The files belonged to Walter Raymond Jr., a top CIA expert in propaganda and psychological operations who had been reassigned to Reagan’s National Security Council staff to oversee the creation of a global psy-op structure including one aimed at the U.S. public.

On Nov. 1, 1983, just a week after the invasion, White House public-relations specialist David Gergen advised Reagan’s image-molder Michael Deaver on steps to orchestrate the “follow-up on Grenada” to impress the American people,  including making sure that the phased U.S. withdrawals were “well publicized, the bigger the groups the better. When units of the fleet leave, that also ought to be done with fanfare.”

The P.R. choreography called, too, for using the “rescued” students as props. Gergen wrote: “Students Meet with Liberating Forces: Everyone sees this as a key event, and it needs to be done before RR [Reagan] leaves for the Far East. Students Visit the Wounded: Many of the wounded would probably welcome a thank you visit from a student delegation.”

In a handwritten comment on the last suggestion, Raymond praised the idea: “Happy Grenada theme.”

Secretary Kerry might argue that Grenada was so Twentieth Century, along with such events as the Vietnam War, the invasion of Panama in 1989 and the Persian Gulf conflict of 1990-91, which involved the slaughter of Iraqi soldiers and civilians even after the Iraqi government agreed to withdraw from Kuwait in a deal negotiated by then-Soviet President Mikhail Gorbachev. [For details, see Robert Parry’s Secrecy & Privilege.]

However, if one were to take up Secretary Kerry’s challenge and just look at the Twenty-first Century and “G-8, major-nation behavior,” which would include the United States and its major European allies, you’d still have a substantial list of U.S. violations: Afghanistan, Iraq, Pakistan, Yemen, Libya and others. France and Great Britain, two other G-8 countries, have engaged in military interventions as well, including France in Mali and other African conflicts.

On Aug. 30, 2013, Secretary Kerry himself gave a belligerent speech justifying U.S. military action against Syria over murky accounts of a chemical weapons attack outside Damascus, a war that was only averted by Putin’s diplomatic efforts in convincing President Bashar al-Assad to agree to eliminate Syria’s chemical weapons.

Plus, throughout his presidency, Barack Obama has declared, over and over, that “all options are on the table” regarding Iran’s nuclear program, a clear threat of another U.S. bombing campaign, another crisis that Putin has helped tamp down by assisting in getting Iran to the bargaining table.

Indeed, it appears that one reason why Assistant Secretary of State Victoria Nuland, a neocon holdover, has been so aggressive in trying to exacerbate the Ukraine crisis was as a form of neocon payback for Putin’s defusing the confrontations with Syria and Iran, when Official Washington’s still-influential neocons were eager for more violence and “regime change.” [See Consortiumnews.com’s “What Neocons Want from Ukraine Crisis.”]

In virtually all these threatened or actual U.S. military assaults on sovereign nations, the major U.S. news media has been enthusiastically onboard. Indeed, the Washington Post and the New York Times played key roles in manufacturing public consent for George W. Bush’s invasion of Iraq in 2003 under the false pretext of eliminating its non-existent weapons of mass destruction.

By promoting dubious and false allegations, the Post and Times also have helped lay the groundwork for potential U.S. wars against Iran and Syria, including the Times making the bogus claim that the Aug. 21 chemical weapons attack east of Damascus was launched by Syrian government forces northwest of the city. Months later, the Times grudgingly admitted that its reporting, which helped bring the U.S. to the brink of another war, was contradicted by the fact that the Sarin-laden missile had a much more limited range. [See Consortiumnews.com’s “The Mistaken Guns of Last August.”]

However, when Russia has a much more understandable case for intervention an incipient civil war on its border that involves clear U.S. interference, the overthrow of an elected president and the participation of neo-Nazi militias the U.S. government and its compliant mainstream media lock arms in outrage.