When Israel’s Prime Minister Netanyahu visits Washington, he behaves like the master of all he surveys, his arrogance extending to his shape-shifting reality about Iran, with expectations of hearty applause for his claims and robust guffawing at his jokes, ex-CIA analyst Paul R. Pillar notes.

Benjamin Netanyahu’s tiresome vilification of Iran has taken on the characteristics of a rote obsession that diverges farther and farther from truth, reality and his own ostensible objective. It is as if, in pursuing his real objective of keeping Iran ostracized, preventing any U.S. agreements with it, and keeping the specter of an Iranian threat permanently overshadowing everything else he’d rather not talk about, he has been reduced to a ritual, repetitive chant of “Iran bad, very bad” and does not care whether or not reflection on what he is saying shows it to make any sense.

Outside of the anti-Americanism that is heard so widely and often, it is hard to think of any other leader or government so dedicated to heaping calumnies unceasingly on another nation, at least one not currently waging war on the heaper’s country. Maybe some American Cold Warriors fixated on the Evil Empire came close. 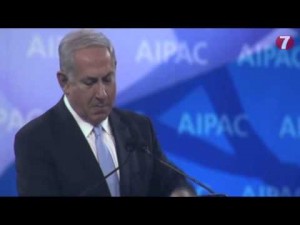 Attacks on Iran occupied most of the first half of Netanyahu’s speech Tuesday to AIPAC. Haaretz accompanied a transcript of the speech with one of those graphics depicting the frequency with which particular words have been used. For the entire speech Iran was mentioned far more than any word other than Israel.

Maybe the relentlessness of this latest iteration of the chant reflects Netanyahu’s frustration over his recent failure to get the U.S. Congress to sabotage the nuclear negotiations with Iran by slapping on new, deal-breaking sanctions. Perhaps he also felt a need to amp up the attacks to bring attention back to the Iranian specter from the crisis in Ukraine.

Falsehoods continue to flow out of Netanyahu’s mouth on this subject. Maybe the technique of getting people to believe something if it is repeated often enough is working, as reflected by some of the same falsehoods coming out of the mouths of members of Congress.

He referred, for example, to the need for pressure to get Iranians to “abandon their nuclear weapons program.” No: according to the U.S. intelligence community, Iran has not decided to build a nuclear weapon, and Israeli intelligence does not disagree.

Netanyahu said that “Iran openly calls for our [i.e., Israel’s] destruction.” No: the former Iranian president who once made a metaphorical statement that got mis-translated into something along that line isn’t even around any more. Actually, the current Iranian government says if the Palestinian problem is resolved then it would be possible for Iran to extend formal recognition to the state of Israel.

In an opening sequence in the speech in which Netanyahu referred to medical and other humanitarian aid that Israel furnishes overseas, he said that Iran doesn’t do any such thing because “the only thing that Iran sends abroad are rockets, terrorists and missiles to murder, maim and menace the innocent.” No: actually Iran does provide medical and similar humanitarian aid.

The prime minister’s analytical assertions are similarly divorced from reality. In arguing for the deal-breaking, impossible-to-achieve objective of no Iranian enrichment of uranium, he said that “letting Iran enrich uranium would open up the floodgates” of “nuclear proliferation in the Middle East and around the world.”

But Iran already has been enriching uranium for some time, and no floodgates have opened. Even if Iran, contrary to its current policy, were to build a nuclear weapon, they still would be unlikely to open.

Netanyahu seemed to dare us not to take him seriously when, in a jarringly discordant note alongside all of the alarmism about a supposedly deadly and dire threat, he tried to crack a joke to accompany his falsehood about ICBMs: “You remember that beer commercial, ‘this Bud’s for you’? Well, when you see Iran building ICBMs, just remember, America, that Scud’s for you.” Hardy har har.

Glaringly absent from the tirade was any of the perspective of a person living in a glass house who should be careful about not throwing stones. For example, along with self-congratulation for medical aid Netanyahu said Israel has provided Palestinians from the Gaza Strip, there was no mention of the misery that Israel has inflicted on people living in the same territory through a suffocating blockade and military-inflicted destruction.

And alongside all of the alarums about a possible Iranian nuclear weapon there was of course no mention of Israel having the only nuclear weapons in the Middle East, totally outside any international control regime and with their existence not even admitted.

Nor was there any real application of logic to implications for policy, given that the most important policy fixture at the moment is the nuclear negotiation. If Netanyahu’s objective really were to assure prevention of an Iranian nuke, rather than assuring persistence of the issue of a possible Iranian nuke, the conclusion would be to support the negotiations rather than to try to sabotage them. Even if one believed all the calumnies, they are either irrelevant to the nuclear talks or all the more reason to hope they succeed.

Listening to a speech such as this, it is a wonder that many Israelis condone a leader who is offering his country unending conflict and confrontation. And it is a wonder that many Americans, including ones with admiration and fondness for Israel, are influenced by him. He is not acting in the best interests of the state they admire and love, let along in the interests of the United States.

The reciter of the primitive chants of hate against Iran has a narrower objective. As Henry Siegman observes, “To say that Netanyahu is not a visionary leader is an understatement. To be sure, he is a clever tactician who knows how to stay in office. That goal, which he believes is unbreakably linked to retaining his leadership of Israel’s political right wing, trumps every other domestic and international challenge that faces Israel.”

← Putin or Kerry: Who’s Delusional?
The Conundrum of ‘Democratic’ Coups →