According to opinion polls, the American people lean toward Democratic positions on a wide variety of issues, from a higher minimum wage to gay marriage. But liberals still lack the clear-cut agenda and the organizational muscle that conservatives have demonstrated over the past several decades, as Michael Winship notes.

That’s a pretty pathetic knight up there on the cover of the March issue of Harper’s Magazine. Battered and defeated, his shield in pieces, he’s slumped and saddled backwards on a Democratic donkey that has a distinctly woeful or bored, maybe — countenance. 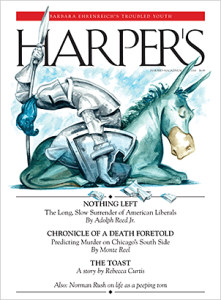 It’s the magazine’s sardonic way of illustrating a powerful throwing down of the gauntlet by political scientist Adolph Reed, Jr. He has challenged the nation’s progressives with an article in the magazine provocatively titled. “Nothing Left: The Long, Slow Surrender of American Liberals.”

His thesis flies in the face of a current spate of articles and op-ed columns touting a resurgence of progressive politics within the Democratic Party often pointing to last year’s elections of Sen. Elizabeth Warren in Massachusetts and Bill de Blasio as mayor of New York City as evidence — although at the same time many of the pieces note that the wave is smashing up against a wall of resistance from the corporate wing of the party.

In a story titled, “Democrats will dive left in 2016 to distance themselves from Obama” a headline designed to roil Republican fervor as well as impugn the opposition — the conservative Washington Times quoted Adam Green, cofounder of the Progressive Change Campaign Committee: “Democrats would be smart in the primary and general election to be more populist and stand up for the little guy more on economic issues.”

In November, Harold Meyerson wrote in the progressive magazine, The American Prospect, “The constituencies now swelling the Democrats’ ranks, Latinos and millennials in particular, have created the space indeed, the necessity for the party to move to the left.”

And Dan Balz and Philip Rucker reported in The Washington Post earlier this month, “By many measures, the party is certainly seen as more liberal than it once was. For the past 40 years, the American National Election Studies surveys have asked people for their perceptions of the two major parties. The 2012 survey found, for the first time, that a majority of Americans describe the Democratic Party as liberal, with 57 percent using that label. Four years earlier, only 48 percent described the Democrats as liberal

Nonetheless, Adolph Reed, Jr., who teaches political science at the University of Pennsylvania and is a long-time student of these things, makes a compelling case that we’re hearing a death rattle more than a trumpeting call to arms.

In his Harper’s piece, Reed argues that Democrats and liberals have become too fixated on election results, kowtowing to the status quo rather than aiming for long-term goals that address the issues of economic inequality. “During the 1980s and early 1990s, fears of a relentless Republican juggernaut pressured those left of center to take a defensive stance,” he writes, “focusing on the immediate goal of electing Democrats to stem or slow the rightward tide. Each election now becomes a moment of life-or-death urgency that precludes dissent or even reflection.”

Reed says that the presidencies of Democrats Bill Clinton and Barack Obama too often acquiesced to the demands of Wall Street and the Right. Of Clinton’s White House years, he clams, “It is difficult to imagine that a Republican administration could have been much more successful in advancing Reaganism’s agenda.”

And President Obama “has always been no more than an unexceptional neo-liberal Democrat with an exceptional knack for self-presentation persuasive to those who want to believe, and with solid connections and considerable good will from the corporate and financial sectors his appeal has always been about the persona he projects the extent to which he encourages people to feel good about their politics, the political future, and themselves through feeling good about him than about any concrete vision or political program he has advanced. And that persona has always been bound up in and continues to play off complex and contradictory representations of race in American politics.”

“The left has no particular place it wants to go,” Reed asserts. “And, to rehash an old quip, if you have no destination, any direction can seem as good as any other the left operates with no learning curve and is therefore always vulnerable to the new enthusiasm. It long ago lost the ability to move forward under its own steam”

He continues, “With the two parties converging in policy, the areas of fundamental disagreement that separate them become too arcane and too remote from most people’s experience to inspire any commitment, much less popular action. Strategies and allegiances become mercurial and opportunistic, and politics becomes ever more candidate-centered and driven by worshipful exuberance about individuals or, more accurately, the idealized and evanescent personae the political holograms their packagers project.”

Reed concludes, “The crucial tasks for a committed left in the United States now are to admit that no politically effective force exists and to begin trying to create one. This is a long-term effort, and one that requires grounding in a vibrant labor movement. Labor may be weak or in decline, but that means aiding in its rebuilding is the most serious task for the American left. Pretending some other option exists is worse than useless.”

Beyond his call for rebuilding the union movement, there’s little solace in Reed’s conclusion. If Hillary Clinton decides not to run, a strong progressive candidate could emerge for 2016, although doomsayers point to the failed candidacies of liberals George McGovern in 1972 and Walter Mondale in 1984.

One hope for Democrats is that, like the old joke about the two curmudgeonly brothers, the other one is worse. When it comes to the presidency at least, Republicans are even more riven and in disarray — a jousting tournament in which all the potential knights-in-chief are riding backwards in the saddle.

← A Selective View of ‘Democracy’
Standing Up to Militarism →

4 comments for “The Quixotic American Left”