A federal judge meted out multi-year prison terms to three anti-nuclear activists from the Transform Now Plowshares group for a symbolic protest at a U.S. nuclear facility in Tennessee. The protesters had been inspired by the courageous White Rose movement in Nazi Germany, as Gary G. Kohls explains.

On Feb. 18, 1943, three idealist anti-fascist whistleblowing students at the University of Munich were arrested and imprisoned by the Gestapo for protesting their war-mongering German government. They had published and distributed a series of anti-Hitler leaflets in Munich and other German cities.

“Why do you not bestir yourselves, why do you allow these men who are in power to rob you step by step, openly and in secret,” their third leaflet asked Germans. “At all points we must oppose fascism, wherever it is open to attack. We must soon bring this monster of a state to an end. A victory of fascism in this war would have immeasurable, frightful consequences.” 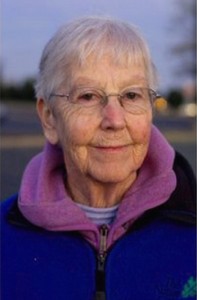 Sister Megan Rice, one of the three Transform Now Plowshares activists sentenced to prison for a symbolic protest at the Oak Ridge nuclear facility in Tennessee.

These courageous protesters, fully aware that their acts of civil disobedience could have severe consequences (long prison terms or even the death penalty), were members of a resistance group that was code-named the White Rose. The students had seen their fascist nation commit international war crimes and crimes against humanity that would later be defined as such at the Nuremberg Trials in 1947. Knowing that something had to be done, they organized the movement to try to raise the consciousness of their cowardly grown-ups about Germany’s pro-war criminal leadership.

The three that were arrested on Feb. 18, 1943, included two medical students, Christoph Probst and Hans Scholl (both of whom had recently returned from the Eastern Front where they worked in field hospitals serving injured German soldiers), and Hans Scholl’s sister Sophie. They were part of a larger group of students who had published and/or distributed the leaflets, hoping to stimulate a resistance movement against German militarism, war-mongering, mass imprisonments, anti-Semitism, secret prisons, torture, disappearances and extrajudicial assassinations.

For their efforts, these truly patriotic, homeland-loving students were tried and convicted of treason (within five days after their arrests) in a brief show trial (in which neither defense witnesses nor effective defense attorneys were permitted) that was rapidly convened on Feb. 23, 1943. The results of the “trial” had obviously been pre-determined by the diabolical Ministry of Justice that wanted the maximum punishment allowed by law, death.

This so-called People’s Court that tried and convicted the White Rose members was presided over by the infamous, shrieking, foul-mouthed, right-wing hanging judge, Roland Freisler, who two years later, in what many regarded as an act of divine justice, was killed in an Allied bombing raid on Berlin.

On Feb. 18, 2014, exactly 71 years from the date of the arrests of the White Rose group, three harmless (unless you are an entity that is preparing to commit crimes against humanity), mild-mannered, non-violent whistleblowers – motivated by their Christian faith – were sentenced in a Tennessee federal court to prison terms ranging from 3 to 5 years for committing a symbolic act of civil disobedience against their own war-mongering nation, which has been developing and stockpiling nuclear weapons of mass destruction at the Highly Enriched Uranium Materials Facility at Oak Ridge, Tennessee.

The HEUMF is a facility for the storage of weapons-grade uranium. The development and storage of weapons of mass destruction or their precursors (and the implied intent to use them) is widely regarded by ethical people as an international war crime and a crime against humanity. (Indeed, President George W. Bush cited his belief that Iraq possessed far less dangerous WMDs as justification for invading and occupying Iraq in 2003 a war that killed hundreds of thousands of Iraqis even as the world learned that Bush’s WMD claims were false.)

Regarding the Oak Ridge case, it is important to know that the 1968 Nuclear Non-proliferation Treaty commits the United States and other declared nuclear-weapons states to work toward eliminating their arsenals, though they remain intact more than four decades later.

The United States also is a signatory to the 1972 Convention on the Prohibition of the Development, Production and Stockpiling of Biological and Toxin Weapons. The spirit of that agreement is to make “progress toward general and complete disarmament, including the prohibition and elimination of all types of weapons of mass destruction” and to prohibit the “development, production and stockpiling” of such weapons.

The group of Catholic workers who call themselves the Transform Now Plowshares movement takes its name from Isaiah 2:4: “They shall beat swords into plowshares and their spears into pruning hooks; nation shall not lift up sword against nation, now shall they learn war anymore.”

This small group of experienced peacemakers who pose no threat to any sentient being on the planet was profoundly inspired by the clear ethical teachings of Jesus of Nazareth (summarized so well in the Sermon on the Mount) and the examples of Henry David Thoreau, Leo Tolstoy, Mohandas Gandhi, Dorothy Day, Thomas Merton, the Berrigan brothers, Martin Luther King Jr. and a whole host of other courageous conscientious objectors to war and killing, including the White Rose martyrs.

The three imprisoned Plowshares members are Greg Boertje-Obed, a widely respected long-term resident of the Loaves and Fishes Catholic Worker community in Duluth, Minnesota (and a member of Veterans for Peace Chapter 80); Michael Walli; and a gentle, elderly Roman Catholic nun, sister Megan Rice (who, because of the sensitivity of U.S. District Court Judge Amul R. Thapar, will “only” be in prison for the next three years). This altruistic group was and still is – hoping to raise citizen awareness of and stimulate resistance to America’s aggressive militarism, war-mongering, mass imprisonments.

The members of Transform Now Plowshares are among the many Catholic workers and assorted other peacemakers who have been protesting America’s drone program and the Unmanned Aerial Vehicles (UAVs), which are appropriately named the Reaper and the Predator. These drones, since George W. Bush’s administration, have been increasingly engaged in extrajudicial assassinations, with many innocent deaths resulting (euphemistically called “collateral damage”).

Heroism of White Rose and Plowshares

The Nazis thought that the influence of the White Rose ended with their arrest, trial and immediate beheadings. Very little press coverage was allowed by Hitler, probably out of fear that citizen outrage would be generated (which was the goal of the White Rose actions).

Similarly, there has been very little coverage of the Transform Now Plowshares action in the mainstream media. I would suspect that only a tiny minority of Americans are aware of the issues involved, just as most “good Germans,” like the famous three monkeys, “saw no evil, heard no evil and spoke no truth” out of fear of what might happen to them if they did (no matter what was happening to the victims of their government, military, police or security apparatus).

The powerful story of the White Rose, the police interrogation, the trial and the punitive nature of a fascist judicial system was nicely portrayed in the powerful movie about the White Rose, “Sophie Scholl: The Final Days” (Click here to see the trailer and assorted clips.)

The White Rose movement (like the Plowshares group) saw clearly the loss of liberty and freedom, the shredding of human rights and the reality that modern wars are not just evil, but also futile and unwinnable. By the summer of 1942, these well-educated White Rose members became aware of the existence of secret prisons, torture and concentration camps. They also knew that hundreds of thousands of Jews had already been murdered in the camps.

The White Rose members knew, too, that despite extensive press censorship of the mainstream German media, atrocities were being committed in Nazi-occupied Poland. Polish intellectuals were being disappeared, military-age Polish men were being murdered and young Polish women were being forced into prostitution to “service” German soldiers in Norway. The legendary “rape and pillage” engaged in by soldiers is not just a metaphor. It was true in the world wars and has been true in every war, even those involving American boys.

The White Rose student groups, dozens of which were scattered around Germany, knew that Hitler’s aggressive war-mongering and state-sponsored terrorism was making Germany the most hated nation in the world. So, being true patriots who loved their homeland enough to have an argument with it, they knew they could no longer be passive.

After the end of the Great War (1914-1918), millions of wounded, demoralized, combat-traumatized war veterans, among them Adolf Hitler and many other Nazis-to-be, came home crazy, angry, disabled, unemployable and looked for someone to blame for their plight. Many of these angry veterans formed into armed, street-fighting militia groups all over Germany, including the infamous Brown Shirts who eventually became beholden to Hitler and the Nazi Party. The Brown Shirts obediently followed any and all orders to harass Jews, socialists, labor unionists, homosexuals, intellectuals and assorted leftists who had liberal, democratic or socialist beliefs.

These well-armed militias established their power and influence through fear, not by the strength of their ideas but by intimidating others with their guns and willingness to commit violent acts, while the conservative police and the conservative courts looked the other way.

Although the “crime” that the White Rose members were convicted of was simply circulating the “subversive” leaflets, the real infraction may have been the act of embarrassing the Gestapo and humiliating the Nazis by successfully evading detection for so many months.

The same could be said of the American Plowshares group. They embarrassed the Y-12 nuclear bomb-making facility at Oak Ridge by breaking into it so easily; and they embarrassed the U.S. government by bringing attention to its nuclear weapons while it was having a tantrum over the alleged possibility that Iran might someday build one nuclear bomb, though Iranian officials say they have no intention of doing so.

And so the U.S. government continues to punish and marginalize America’s truth-tellers, whistleblowers and prophetic voices like Edward Snowden, Chelsea (formerly Bradley) Manning and WikiLeaks. Now added to the long list of Americans who have been made prisoners of conscience are the Plowshares protesters.

It seems that most governments fail to realize that the punishment of people of conscience usually backfires. Rather than eliminating them from the pages of history, martyrdom actually makes popular models of them so that their spirits live on, inspiring future nonviolent resistance efforts.

Surely the Transform Now Plowshares, inspired as they were by the White Rose, will inspire others. Their imprisonment also offers an opportunity for other Americans to raise their voices in a demand for clemency.

Dr. Kohls is involved in peace and justice and writes a regular column for the Duluth Reader, the alternative newsweekly that serves the greater Duluth, Minnesota area. He critiques fascism, corporatism, militarism, racism and other movements that are anti-democratic.

← The Quixotic American Left
Income Inequality on US Campuses →

2 comments for “Standing Up to Militarism”