The entangling threads connecting technology, media and the surveillance state have snarled so completely that it’s next to impossible to untie them, exemplified by Amazon, the Washington Post, and the CIA’s pending assassination of a suspected American terrorist, as Norman Solomon explains.

President Barack Obama is now considering whether to order the Central Intelligence Agency to kill a U.S. citizen in Pakistan. That’s big news this week. But hidden in plain sight is the fact that Amazon would be an accessory to the assassination.

Amazon has a $600 million contract with the CIA to provide the agency with “cloud” computing services. After final confirmation of the deal several months ago, Amazon declared: “We look forward to a successful relationship with the CIA.” 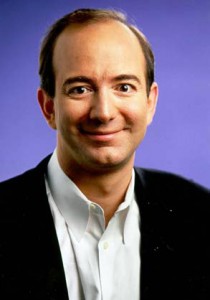 The relationship means that Amazon — logoed with a smiley-face arrow from A to Z, selling products to millions of people every week — is responsible for keeping the CIA’s secrets and aggregating data to help the agency do its work. Including drone strikes.

Drone attacks in Pakistan are “an entirely CIA operation,” New York Times reporter Mark Mazzetti said Tuesday night in an interview on the PBS NewsHour. He added that “the Pakistani government will not allow the [U.S.] military to take over the mission because they want to still have the sort of veneer of secrecy that the CIA provides.”

The sinister implications of Amazon’s new CIA role have received scant public attention so far. As the largest Web retailer in the world, Amazon has built its business model on the secure accumulation and analysis of massive personal data. The firm’s Amazon Web Services division gained the CIA contract amid fervent hopes that the collaboration will open up vast new vistas for the further melding of surveillance and warfare.

Notably, Amazon did not submit the low bid for the $600 million contract. The firm won the deal after persuading the CIA of its superior technical capacities in digital realms. Amazon is now integral to the U.S. government’s foreign policy of threatening and killing.

Any presidential decision to take the life of an American citizen is a subset of a much larger grave problem. Whatever the nationality of those who hear the menacing buzz of a drone overhead, the hijacking of skies to threaten and kill those below is unconscionable. And, as presently implemented, unconstitutional.

On Feb. 11, the Times reported that the Obama administration “is debating whether to authorize a lethal strike against an American citizen living in Pakistan who some believe is actively plotting terrorist attacks.” In effect, at issue is whether the President should order a summary execution — an assassination — on his say-so.

The American way isn’t supposed to be that way. The “due process of law” required by the Fifth Amendment of the United States Constitution is not supposed to be whatever the President decides to do. (Obama, however, has compared a strike against a terrorist presenting an “imminent” threat to a SWAT team killing a sniper shooting down at a crowd.)

A free and independent press is crucial for confronting such dire trends. But structural factors of corporate power continue to undermine the potential of journalism. The Washington Post is a grim case in point. Six months ago, Jeff Bezos — the CEO and main stakeholder of Amazon — bought the Post. But the newspaper’s ongoing CIA-related coverage does not inform readers that the CIA’s big contract with Amazon is adding to the personal wealth of the Post’s sole owner.

This refusal to make such conflict-of-interest disclosures is much more than journalistic evasion for the sake of appearances. It’s a marker for more consolidation of corporate mega-media power with government power. The leverage from such convergence is becoming ever-less acknowledged or conspicuous as it becomes ever-more routine and dominant.

After e-mail correspondence with me about the non-disclosure issue in early January, the executive editor of the Washington Post, Martin Baron, declined to answer questions from media outlets on the subject. On Jan. 15 — when I delivered a RootsAction.org petition under the heading “Washington Post: Readers Deserve Full Disclosure in Coverage of CIA,” signed by 30,000 people, to the newspaper’s headquarters — Baron declined to meet with me or designate any employee to receive the petition. Clearly the Post management wants this issue to go away.

But, as I wrote to Baron last month, it’s all too convenient — and implausible — for the Washington Post to claim that there would be “no direct relevance of the [Amazon-CIA] cloud services contract to coverage of such matters as CIA involvement in rendition of prisoners to regimes for torture; or in targeting for drone strikes; or in data aggregation for counterinsurgency.”

5 comments for “Amazon, the CIA and Assassinations”