The great tragedy of Nelson Mandela’s life was that his revolution only passed political power to South Africa’s black majority, not economic power, which remained in the hands of the old white ruling classes, both domestic and global. That is a reality now lost, writes Gary G. Kohls.

“Now That He Is Safely Dead” is a poignant poem that was written by black poet/musician Carl Wendell Hines soon after Malcolm X was assassinated in 1965. The poem has since been appropriately associated with the death of Martin Luther King Jr. and his legacy of nonviolent struggle for black liberation, freedom, equality, economic justice and the pursuit of happiness for all.

The poem reads: “Now that he is safely dead let us praise him, build monuments to his glory, sing hosannas to his name. Dead men make such convenient heroes. They cannot rise to challenge the images we would fashion from their lives. And besides, it is easier to build monuments than to make a better world.” 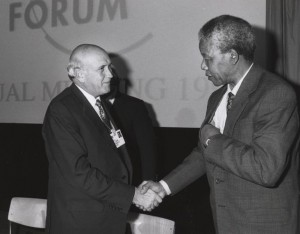 And now the same thing is happening to Nelson Mandela, the latest black liberation activist-hero whose name has been exalted (but by lip service only) by the very international ruling elites who once tried to obstruct everything that Mandela stood for.

Ever since the frail Mandela became mortally ill a year ago, those same powers-that-be have been “exalting” the man who, we are told by media elites and their paymasters, courageously and almost single-handedly overcame the fascist Apartheid system in South Africa. Those powers have made Mandela into another safely dead prophet who will never be able to contradict the hype that hides much of the real story of Mandela.

Greg Palast wrote a recent article titled ”The Mandela Barbie,” stating: “I can’t take it anymore. All week, I’ve watched Nelson Mandela reduced to a Barbie doll. From Fox News to the Bush family, the politicians and media mavens who body-blocked the anti-Apartheid Movement and were happy to keep Mandela behind bars, now get to dress his image up in any silly outfit they choose.

“Poor Mandela. When he’s not a doll, he’s a statue. He joins Martin Luther King as another bronzed monument whose use is to tell us that apartheid is now ‘defeated’ – to quote the ridiculous headline in the Times. It’s more nauseating than hypocrisy and ignorance. The Mandela Barbie is dressed to serve a new version of racism, Apartheid 2.0, worsening both in South Africa – and in the USA.

“The ruling class creates commemorative dolls and statues of revolutionary leaders as a way to tell us their cause is won, so go home. For example, just months ago, the US Supreme Court overturned the Voting Rights Act, Dr. King’s greatest accomplishment, on the specious claim that, ‘Blatantly discriminatory evasions are rare,’ and Jim Crow voting practices are now ‘eradicated.’

“‘Eradicated?’ On what planet? The latest move by Florida Republicans to purge 181,000 voters of color – like the stench from the shantytowns of Cape Town – makes clear that neither Jim Crow nor Apartheid has been defeated. They’re just in temporary retreat. Nevertheless, our betters in the USA and Europe have declared that King slew segregation, Mandela defeated apartheid; and therefore, the new victims of racial injustice should just shut up and stop whining.”

Palast then discusses the unspoken reality of Mandela’s “pained legacy,” which is “a corroded South Africa still ruled by a brutal economic apartheid. Today, the average white family has five times the income of a black family. Welcome to ‘freedom.’

“The US and European press have focused on Mandela’s saintly ability to abjure bitterness and all desire for revenge, and for his Christ-like forgiving of his captors. This is to reassure us all that ‘good’ revolutionaries are ones who don’t hold anyone to account for murder, plunder and blood-drenched horror – or demand compensation. That’s Mandela in his Mahatma Gandhi doll outfit – turning the other cheek, kissing his prison wardens.

“Mandela’s circle knew this: You can’t forgive those you defeat until you defeat them. And, despite the hoo-hah, Mandela didn’t defeat apartheid with ‘nice’ alone. In the 1980sSouth African whites faced this reality: The Cubans who defeated South African troops in neighboring Angola were ready to move into South Africa. The Vietnamese who had defeated the mighty USA were advising Mandela’s military force.

“And so, while Mandela held out a hand in forgiveness – in his other hand he held Umkhonto we Sizwe, a spear to apartheid’s heart. And Mandela’s comrades tied a noose: an international embargo, leaky though it was, that lay siege to South Africa’s economy.

“Seeing the writing on the wall (and envisioning their blood on the floor), the white-owned gold and diamond cartels, Anglo-American and DeBeers, backed by the World Bank, came to Mandela with a bargain: black Africans could have voting power . . . but not economic power.

“Mandela chose to shake hands with this devil and accept the continuation of economic apartheid. In return for safeguarding the diamond and gold interests and protecting white ownership of land, mines and businesses, he was allowed the presidency, or at least the office and title.

“It is a bargain that ate at Mandela’s heart. He was faced with the direct threat of an embargo of capital, and taking note of the beating endured by his Cuban allies over resource nationalization, Mandela swallowed the poison with a forced grin. Yes, a new South African black middle class has been handed a slice of the mineral pie, but that just changes the color of the hand holding the whip.

“In the end, all revolutions are about one thing: the 99% versus the 1%. Time and history can change the hue of the aristocrat, but not their greed, against which Mandela appeared nearly powerless.”

So I expect that the core of Mandela’s legacy (his decision to reject the violent overthrow of the state, the healing potential of the Truth and Reconciliation commissions and the obtaining of the vote for blacks) will continue to be minimized while the fascist economic system of racist inequality continues to thrive.

With powerful resistance from white conservatives, America did posthumously award Dr King a number of monuments and a national holiday that never seems to go beyond King’s admittedly powerful, anti-racist “I Have A Dream” speech. But it seems to me that the annual commemorations usually ignore King’s powerful antiwar, anti-fascist, economic justice themes of the later movement.

Those post-1963 messages have been watered-down, subverted and ignored by governments, the media and the churches (with some exceptions). Even the King Center in Atlanta seems to minimize the Jesus-inspired core principles of Christian nonviolence that were so central to King’s black liberation movement.

Officialdom tolerates the re-enactments of King’s Dream speech (and the fact that Mandela became South Africa’s first black puppet-president), with the assurance that the memorial events will remember (falsely) a “less militant” and more benign King rather than the aggressive Christ-like prophet who had to be “disappeared” in both word and deed.

So we can expect that the upcoming 2014 MLK Anniversary Day will safely pass into memory with very little attention being paid to the radical gospel source of King’s inspiration, the nonviolent social justice movement invented, taught and faithfully practiced by Jesus of Nazareth.

I believe that it is useful at this point to acknowledge that Jesus was just as dark brown/”black”-skinned as was the Asian Indian Mohandas Gandhi, although he was not as deeply brown/black as King or Mandela.

Jesus was a First Century Palestinian Jew who, anthropologists tell us, probably looked more like a short Yasser Arafat than a tall Barry Gibbs (of BeeGee “fame”). For more on the skin color issue, see: http://jesuswasblack.wordpress.com/was-jesus-a-black-african-israeli-palestinian/.

Jesus, Gandhi, King and Mandela were all, at one time or another, feared and then demonized by white-ruling elites who ordered them hunted down and neutralized by white racist soldiers and white civilians who were beholden to their white paymasters.

There are hundreds of monuments and statues dedicated to Gandhi as there are to King all over the world. Most of the national governing bodies – even India’s Hindu temples – pay only lip service to the messages and mission of Gandhi.

Similarly, America’s governing bodies and churches, with few exceptions, ignore the radical antiwar messages of King and Jesus (who also has no lack of monuments, buildings, crucifixes and other objects of adoration that immortalize his name but evade his central teachings).

Peace and justice-seekers who have read the Hines’ poem feel that it applies also to all the other martyred, left-wing champions of the down-trodden. And that includes the whistle-blower Jesus, who taught and practiced the sacred obligation to relieve human suffering.

Jesus’s teachings of the unconditional, nonviolent love of friends and enemies was largely responsible for the dramatic growth of the early church that occurred despite the terrible persecutions that it suffered for the two or three centuries after his political assassination. Sadly, today, the implementation of the Sermon on the Mount ethics can only be found in a few remnants of the original form of Christianity.

Dr. King was in the stream of one of those remnants that echoed the original voice of Jesus and had the courage to both preach and practice those dangerous revolutionary truths that ruling elites seem to fear so deeply. Dr. King had a deep faith in the power and practicality of the radical good news about love that was so clearly articulated in the Sermon on the Mount and the Golden Rule.

But the voices of the prophets always seem to get silenced in racist, militarized, corporatized societies – and it isn’t by accident. Both ancient and modern powers-that-be recognize dangerous whistle-blowers when they see them, and they usually don’t waste much time ordering contingency plans to be set up for their disappearances or “silencing.”

Initially, the tellers of inconvenient truths are just ridiculed (or ignored) until the messenger gains a following; then they and their followers are violently opposed; and then (rarely, it seems to me), the prophetic truths are ultimately accepted as self-evident (as per the 19th century German philosopher Schopenhaurer who famously wrote: “All truth passes through three stages. First, it is ridiculed. Second, it is violently opposed. Third, it is accepted as being self-evident.”)

In our more complex era, Schopenhauer’s dictum still holds, but now there are more sophisticated ways to discredit prophetic voices (by rumors; by infiltration of the prophet’s movement by agents provocateur; by death threats to the victim or family; by subversion by cunning right-wing think tanks that spread disinformation to the media; by harassment; by arranging murders that look like accidents or suicides; or by extra-judicial assassination by some “deranged” patsy).

And so it goes. Being a prophet is hazardous duty. King characterized it as “a vocation of agony.” Whistle-blowers such as Jesus, Mandela, Gandhi and King, while they were still alive, knew very well that they were going to pay a heavy price for their refusal to bow down to authority. They knew that they would have to endure the death threats, the character assassinations and the murder attempts if they didn’t shut up.

Modern whistle-blowers like Wellstone, Ellsberg, Assange, Manning and Snowden probably recognized that they, like King, might not “reach the promised land” (where justice was always served and peace was always sought). These patriots, willing to have lover’s quarrel with their nation, were simply, because of their intact consciences, trying to expose the fascism, racism, militarism, sexism, xenophobia and economic oppression that was slowly destroying the souls of their homelands.

Getting to the promised land is not up to the prophets; it is up to the followers and the true believers in the grand vision.