If presenting reality is the goal of news, the U.S. mainstream media strayed farther off course in 2013, lost in a self-defeating spiral of maintaining “credibility” by not challenging the powers-that-be and thus losing the trust of the public, as Danny Schechter explains.

At year end, the news agenda fills up with stories about top stories, a chance for networks to repackage footage or highlight favorite newsmakers. These stories rarely look at the news system that picks them or why.

There are two news systems in America. The more prominent one is the official parody of journalism that represents most of what the mainstream or what some call the “lame stream” media offers. These are the “products” of an “official” news business, an industry under growing pressure from within and without to maintain a semblance of credibility with a global audience that now has many other divergent sources to rely on. 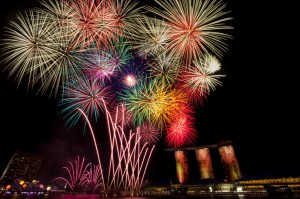 A part of a global entertainment combine, the advertising-sponsored “news biz” also spends inordinate amounts of money marketing itself and referencing its own output. It is that system that has become one of the major pillars of established power, like the institutions of government and the office holders that the mainstream media covers to a fault. Official news tells us what politicians say.

Some of the stars from the news world move into politics, just as ex-politicians become pundits who define for us what the news is supposed to mean. The system is interconnected and symbiotic. It looks diverse but U.S. mainstream news operates in an ideological framework as surely as Chinese news does. No wonder critics now speak of a military-industrial-media complex.

News has become a publicity machine for those in power but also a shaper of the narratives and myths we live by. It is not surprising that two-thirds of the graduates of journalism schools find jobs not in news but in PR and lobbying firms. And many of the mainstream journalists function increasingly like stenographers, offering up only the news that they and their news executives consider fit to print while the audience increasingly turns away, or migrates to visual media and social media, abandoning most  “serious” newspapers and magazines all together.

One of the reasons is a sense well documented by many media critics that news is almost processed to leave out as much as it includes. Investigative journalist Russ Baker of the website whowhatwhere.com puts it this way:

“It’s not so much a challenge to identify important stories the media missed. They are to be found everywhere. What’s hard is to find transformative or substantial stories the media actually got right , really right, by being bold and going wide and deep. Truth be told, the media misses most of the real stories, or at least the stories behind the facile, thin inquiries that prop up wobbly headlines.”

This may be one reason traditional news in the center of the media system is losing its appeal with more critical consumers turning to specialized or even international outlets that have entered the U.S. media space, by offering what we used to call “hard news” and analysis that most U.S. news outlets underplay or abandon.

Welcome Al Jazeera America, RT, and Sahara Reporters as well as Arise TV to tell us the stories that are often conspicuous by their absence. Some U.S. alternative media outlets are looking for market share, too, like Link TV, Democracy Now, The Real News Network, and individuals like Laura Flanders and Bill Moyers.

Free Speech TV tells us: “Over the last six months, conservatives have begun to direct vast resources into new right-wing media outlets to supplement the conservative programming of Fox News Channel. For example, Glenn Beck’s The Blaze Television Network is now available in more than 15 million homes. Then there was the launch of One America’s News Network, a new conservative broadcast news network whose stated mission is to provide a platform ‘for a broader spectrum of voices on the right than Fox now offers.’ Meanwhile, progressive media outlets are closing their doors”

While that may be true, non-news platforms like Facebook and Twitter (and their many competitors), as well as an array of news websites are pumping out more stories than ever across the spectrum. The “leaks” of whistleblowers like Julian Assange, Chelsea Manning and Edward Snowden have had more impact than media investigations. News consumers are becoming their own editors, selecting the stories they want to read from sources that didn’t exist years ago. Add in the aggregators, the Diggs and Reddits; there’s just not enough time in the day to take it all in.

Increasingly the news that has the most impact is the news satirizing the news. In many ways the Comedy Channel has become the most respected news channel, offering a hard-hitting take or a parody of a parody. Saturday Night Live’s take-offs get as much attention as the events and personalities they satirize. Attitude seems to trump information in a culture with a “context of no context.” No wonder so many young people laugh at the news. Mockumentaries may be making more money than documentaries.

And now, even big-budget movies compete with characters that make fun of a news media that many feel deserves it. Hilarious and punchy films like Anchorman and Anchorman 2 lampoon news practices in a way that resonates with audiences. In the end of his latest send-up on the news, fictional news anchor. “Ron Burgundy” played by Will Farrell gets his highest ratings when he denounces his own newscast on the air and then walks off the set.

At the same time, reality-based programming seems more popular than newsy shows about reality. The more serious TV series on cable channels or distributors like Netflix are “edgy” dramas that, in the words of the New York Times, only offer “hints of reality.” Those “hints” feature political scandals and the terror wars. They may be more attractive to people in power than the real thing.

The Times reports that President Obama is drawn to programs that showcase, “wars, terrorism, economic struggles and mass shootings.” Obama, whose own speechwriter once wrote fiction for a living, seems to prefer these “dark” characterbased shows. He was especially drawn to program like The Wire, set in Baltimore, that pitted the police against drug dealers and urban gangsters.

The author, former newspaperman David Simon, became a TV producer to popularize what he learned about the world. I am sure he is pleased that Obama likes his work, but his evolving underlying ideas have few outlets outside the world of entertainment and none in the White House.

A recent essay by Simon appeared in The Guardian with an indictment of inequality and American capitalism. He calls his country “a horror show,” arguing in terms that his fan Obama would publicly have to reject. He even calls for a rereading of Karl Marx.

Simon wrote, “Right now capital has effectively purchased the government, and you witnessed it again with the healthcare debacle in terms of the $450m that was heaved into Congress, the most broken part of my government, in order that the popular will never actually emerged in any of that legislative process. So I don’t know what we do if we can’t actually control the representative government that we claim will manifest the popular will.”

Simon has given up on the press and may soon be giving up on the media. That’s not an optimistic note with which to begin a new “news year.”

News Dissector Danny Schechter has worked in network news and written about his experience critically. He edits the media watchdog site, Mediachannel.org, and blogs at newsdissector,net. His latest book is Madiba AtoZ: The Many Faces of Nelson Mandela. Comments to dissector@mediachannel.org.

2 comments for “Happy ‘News Year’: Decline of the ‘News’”