President Obama has promised to end America’s combat role in Afghanistan by the end of 2014 but is haggling with Afghan President Karzai over how to keep soldiers there for another decade, a dispute that Independent Institute’s Ivan Eland says is a good excuse to leave.

The ever-mercurial Hamid Karzai, the Afghan president, recently called a council of the nation’s tribal elders(a loya jirga) to ratify a bilateral security agreement reached with the United States governing the up to 12,000 U.S. forces that would be left in that country after the withdrawal of all American and international combat forces at the end of 2014.

Then Karzai promptly defied his own conclave by ignoring its recommendation to sign the agreement quickly; he insisted that he would sign it only in the spring of 2014. He then added more conditions, namely that the United States free Afghan prisoners held at the prison in Guantanamo and halt all U.S. military raids on Afghan homes. 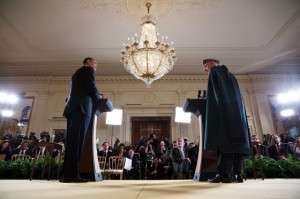 The bilateral agreement itself says that the United States can raid Afghan dwellings only in extraordinary circumstances. Completely ending such raids would severely impede one of the primary missions in Afghanistan for the residual U.S. forces, hunting any remaining al Qaeda terrorists.

Because Karzai really cares little about this mission, he is perfectly willing to demand that it be hampered to score political points domestically with an Afghan population that is sick of both the practice and foreign occupation. He originally made this concession to the United States only to get U.S. troops to continue training Afghan forces and to retain the billions in foreign aid that comes with that effort.

From his first campaign for president, Barack Obama promised to end more than decade of war and bring American troops home. Yet he has since scaled this back to withdrawing “combat” forces, thus allowing him the loophole of retaining up to 12,000 U.S. forces in the country. Yet Karzai’s insistence that all U.S. raids on Afghan homes by such residual forces be stopped shows that Obama has simply redefined the word “combat.”

Counterterrorism missions do involve extreme danger and shooting people, combat in the thinking of any layman. U.S. military forces training Afghan forces in the field can also be involved in what anyone would recognize as combat, especially if they come under enemy fire. So in reality, by leaving any U.S. forces in Afghanistan, Obama is really breaking his promise to the American people to remove all combat forces by the end of 2014.

But are these residual forces really needed for U.S. security? Hardly. Even U.S. intelligence believes only a small number of al Qaeda operatives remain in Afghanistan. If the United States needed to kill them, it could simply do so with airstrikes or drone attacks from outside the country.

The real reasons for the continuing presence of U.S. forces is to keep training the wobbly Afghan security forces and act as a political symbol of continued American commitment to the Afghan government’s survival. Since a 12-year, $43 million “train and equip” mission by a larger U.S. force has not resulted in competent Afghan security forces, it is doubtful that a smaller residual American force can effect the same.

In other words, the main reason the troops are being left appears to be that if the United States left completely, psychologically the Afghan regime would collapse and civil war would resume. Newsflash: That outcome may happen even if the United States keeps a residual force in the country, only resulting in more needless American deaths.

At any rate, given those dire circumstances, one would think that Karzai would be pandering to the Americans to get them to stay rather than milking them for every possible concession. However, Karzai knows how Americans think. Unfortunately, he knows that in the past, they have behaved imperially, rarely leaving anywhere they have occupied, because they foolishly believe their security depends on remaining in far-flung places around the globe to conduct nation-building missions.

So he brazenly makes more demands of the United States, even while his government’s future is tenuous without, and maybe even with, residual American forces and aid.

The Obama administration should abandon the American imperial way of thinking and use Karzai’s escalating demands, and refusal to sign the bilateral agreement until next spring, to call his bluff and withdraw American forces completely from Afghanistan.

The United States doesn’t need troops on the ground in the country to prevent any return by al Qaeda, taking advantage of the return of chaos, but only to warn the Afghan Taliban not to harbor such people or American air power will return to pummel the country from the air. That threat is credible and should deter a Taliban that likely has learned its lesson from sheltering such unwanted visitors the last time around.

← The 2nd Amendment and Killing Kids
The Real Existential Threat →