A Syrian rebel, brandishing the severed head of a man suspected of adhering to Shiite Islam, explained to a crowd and a video camera why the Sunnis, both native to Syria and those flocking from other Arab nations, must continue fighting to overthrow the Assad regime, which is dominated by Alawites, an offshoot of Shiite Islam. 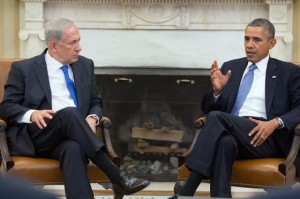 As it turned out, however, the man whose head had been severed, Mohamed Fares Marroush, wasn’t a Shiite, but rather a wounded Sunni rebel fighter who while under anesthesia at a hospital near Aleppo made the fatal mistake of muttering the names of some Shiite religious figures. [NYT, Nov. 16, 2013]

But you get the point. Some Sunni extremists are hunting through hospitals searching for suspected Shiites and making grisly examples of them. The case of Mr. Marroush made the newspapers not because these sorts of rebel atrocities are rare but because, in this case, they accidentally decapitated one of their own

The hatreds between the Shiite and Sunni sects go back 1,400 years to the bloody succession struggle after the death of the Prophet Mohammad, and that sectarianism is now defining the civil war in Syria as well as the larger power struggle across the Middle East.

In the case of Syria, the U.S. government has been under pressure from Israel and Saudi Arabia, the wealthiest Sunni Arab country, to enter the conflict on the side of the Syrian Sunni rebels and thus to strike a blow at Shiite-ruled Iran, which is backing Syrian President Bashar al-Assad. To push this goal of U.S. intervention, the Israelis and the Saudis have established what amounts to an anti-Shiite alliance based on their mutual hatred of Iran.

Currently, the Obama administration is “covertly” supplying light arms to the supposedly “moderate” Syrian rebels via the CIA. But President Barack Obama backed off a threat to bomb military targets of the Assad regime after a chemical weapons incident on Aug. 21, accepting instead an agreement with Assad to dismantle the regime’s chemical arsenal, a reversal that infuriated the Saudi-Israeli alliance.

But this joint Saudi-Israeli assault on what’s known as “the Shiite crescent” an arc from Iran through Iraq and Syria to the Hezbollah strongholds in Lebanon is being fought on a variety of fronts, including on Capitol Hill and in the U.S. news media where American neoconservatives are working to deepen U.S. military involvement in Syria and to shoot down an interim agreement that would constrain but not eliminate Iran’s nuclear program.

The Washington Post’s editorial page long the neocons’ media flagship  lamented that President Obama had allowed a “rift” to form between the United States and Israel over Iran. In a typically twisted account of the situation in the Middle East, the Post’s editors wrote:

“Even a permanent settlement [restraining Iran’s nuclear program] would be unattractive to Israel if it meant that the United States would step back from the regional conflict spawned by Iran’s decades-old effort to gain hegemony over the Middle East. Like Saudi Arabia and other Sunni Arab governments, Israel does not wish to be left alone to face Iranian aggression in Iraq, Syria and Lebanon or its terrorist activities across the region.”

It’s hard to say which is more delusional, the Syrian rebel’s tirade about Shiite plans to “rape the men before the women” or the Washington Post’s ranting about Iran’s “hegemony over the Middle East.” For all the repressiveness of its Islamic political system, Iran has not been the region’s aggressor.

Indeed, Iran has more often been the victim of aggression, counting even Tuesday’s suicide bombings of Iran’s embassy in Beirut, Lebanon, that killed at least 22 people, including an Iranian diplomat. Historically, too, Iran and the region’s Shiites have more often been on the defensive. In 1980, just a year after Iran’s Islamic revolution, the Saudi monarchy and other oil-rich Sunni sheikdoms supported the invasion of Iran by Iraq’s dictator Saddam Hussein, a Sunni, a war that lasted eight years and killed hundreds of thousands of Iranians.

Similarly, the rise of the Iranian-backed Hezbollah movement in Lebanon came in reaction to the Israeli invasion and occupation of Lebanon in the 1980s. And, in Syria, the 42-year-old Assad dynasty predates Iran’s revolution of 1979 by eight years, so the notion that Iran is expanding its “hegemony” by aiding the Assad regime now is upside-down; Iran is helping an embattled ally that is facing a military challenge. It is Saudi Arabia and other Sunni regimes collaborating with Israel that are trying to change the geopolitical equation in the region by ousting Assad and his Alawite-dominated regime.

Ironically, the only aggressive war that has expanded Iran’s regional influence was launched by the neocons in 2003 when President George W. Bush invaded Iraq, ousted the Sunni dictator Saddam Hussein, and enabled the Shiite-dominated government of Prime Minister Nouri al-Maliki to take over.

Indeed, it is doubly ironic when the Washington Post’s neocons who enforced Official Washington’s pro-Iraq War conventional wisdom under George W. Bush now complain about “Iranian aggression in Iraq.” First, the real Iraq aggression was committed by Bush and was cheered on by the Post, and, second, the current Iraqi government has reached out peacefully to Iran as a neighboring Shiite country to the consternation of the Saudis who complained bitterly about Bush’s Iraq miscalculation.

The issue of nuclear weapons also is one in which the Post and nearly the entire U.S. news media reveal a profound bias and unprofessionalism. Rarely is it mentioned, even in the context of Israel’s threats to bomb Iran’s nuclear facilities, that Israel has a large and undeclared nuclear arsenal and that U.S. intelligence agencies agree the Iran abandoned its nuclear weapons program a decade ago.

That bias was underscored in the mainstream U.S. media and political worlds in October when few eyebrows were raised over a recommendation from billionaire Sheldon Adelson, a major financial backer of the Republican Party and a strong supporter of Israel’s Prime Minister Benjamin Netanyahu, that the U.S. military should drop a nuclear bomb on an Iranian desert with the explicit warning that “the next one is in the middle of Tehran,” a city of eight million people. [See Consortiumnews.com’s “A Threat to Nuke Tehran.”]

The U.S. press also has been slow to recognize the existence and significance of the new Saudi-Israeli alliance, which I began writing about last summer. But the reality is finally dawning on some analysts, including New York Times columnist Thomas L. Friedman.

Writing from the United Arab Emirates, a key Saudi-Sunni ally, Friedman expressed his amazement that he is seeing “a day when the Jews controlling Jerusalem and the Sunni Saudi Custodians of the Great Mosques of Mecca and Medina would form a tacit alliance against the Shiite Persians of Iran and the Protestants of America.

“But is this good news? At one level, yes. I attended a Gulf security conference here in Abu Dhabi that included officials and experts from all over the Arab/Muslim world. In the opening session, Shimon Peres, Israel’s president, flanked by the white and blue Israeli flag, gave an address by satellite from his office in Jerusalem. But this tacit Israeli-Sunni Arab cooperation is not based on any sort of reconciliation, but on the tribal tradition that my enemy’s enemy is my friend, and the enemy is Iran, which has been steadily laying the groundwork to build a nuclear weapon.

“Diplomats and ministers from Israel and the Israel lobby have been working Congress, while officials from Arab Gulf states have been telling the Obama administration directly the same message: how much they oppose the proposed deal that Secretary of State John Kerry and the foreign ministers of France, Britain, Russia, China and Germany have drafted to trade limited sanctions relief in return for Iran starting to roll back its nuclear program.

“Never have I seen Israel and America’s core Arab allies working more in concert to stymie a major foreign policy initiative of a sitting U.S. president, and never have I seen more lawmakers, Democrats and Republicans, more willing to take Israel’s side against their own president’s. I’m certain this comes less from any careful consideration of the facts and more from a growing tendency by many American lawmakers to do whatever the Israel lobby asks them to do in order to garner Jewish votes and campaign donations.”

The current question facing the United States is whether this new alliance combining Israel’s skillful propaganda and lobbying with Saudi Arabia’s hoards of money and loads of oil reserves can essentially seize control of U.S. foreign policy and draft the U.S. military into the regional struggle against Iran and the so-called “Shiite crescent.”

Saudi money seems to have bought the service of the French government as the Sunnis’ anti-Iranian cat’s paw among the so-called “p-5-plus-1” the five permanent members of the United Nations Security Council plus Germany in the nuclear negotiations with Iran. [See Consortiumnews.com’s “Why France Sank an Iran Nuke Deal.”]

In tandem, Israel has whipped many members of Congress into line behind a proposal for more poison-pill sanctions against Iran, while influential neocons have been flooding the major op-ed pages and talks shows with Israeli-approved talking points.

The Founders’ warnings to the American people about the dangers of “entangling alliances” have never seemed more prescient.